In Toronto, calls to 911 about possible shots fired often provide only vague directions for officers and sometimes turn out to be firecrackers or a truck backfiring. The company behind ShotSpotter says its technology could change that, and they have hired a lobbyist here to make their case. So far, though, it’s a tough sell to local politicians and police.

When someone fires a gun in a crime-plagued neighbourhood in Canton, Ohio, dozens of microphones on rooftops are listening, feeding data to a sophisticated computer system that can tell a gunshot from a firecracker. The system, called ShotSpotter, immediately pinpoints a gunshot’s location and sends an alert to police.

The makers of ShotSpotter, a system that allows police to monitor neighbourhoods for gunshots, are lobbying for Toronto adopt the technology.

The system, offered by Newark, Calif.-based SST Inc., dates back to the 1990s and is used in 90 cities across the United States, as well as in Cape Town, South Africa. New York Mayor Bill de Blasio is expanding his city’s use of the system, after a pilot project in the Bronx and Brooklyn last year.

In Canton, police say ShotSpotter gives them a precise spot where they might find a victim, an armed criminal or at least the shell casings left behind after a shooting – evidence that allows them to track the gun that was used.

“There’s a red dot on a map exactly where it is,” Canton Police Chief Bruce Lawver says, crediting the system with assisting with arrests and, as part of a wider strategy, resulting in a 22-per-cent drop in shootings since it was adopted in 2013. “If you are policing in an urban area, I don’t think the question is going to be, eventually, why do you have ShotSpotter? It is probably going to be, why don’t you have ShotSpotter?”

In Toronto, a recent spike in shootings has raised alarms and comparisons to 2005’s Summer of the Gun, when 52 people died from bullets in many of the city’s troubled neighbourhoods. Still, talk at city hall has for months focused on the need to rein in the police force’s ballooning $1-billion budget, not on new gadgets for officers.

However, last week’s landmark report on cutting the costs of policing also called for the increased use of high technology and “big data” to better deploy officers.

And that’s something ShotSpotter’s proponents say the system provides in spades. 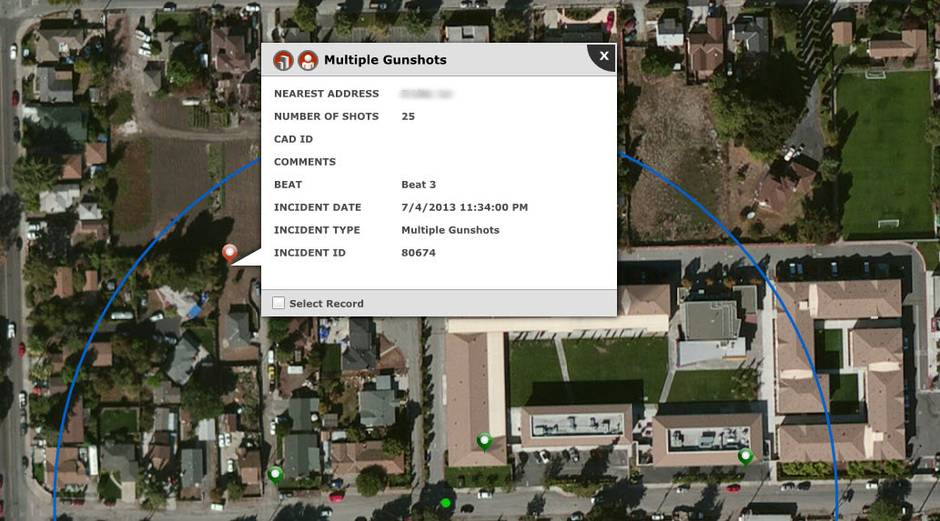 Using microphones sitting on rooftops, ShotSpotter identifies the location of a gunshot and alerts police.

Not only does it give officers an alert whenever a shooting takes place, its boosters say, it allows police to track exactly how many shootings occur, even in neighbourhoods where they are so commonplace that residents – who have become jaded, frightened or distrustful of police – have given up calling 911 when they hear gunshots.

ShotSpotter lobbyist Raj Rama has talked up the system’s benefits at least briefly with Mayor John Tory and with Councillor Josh Colle, who represents Ward 15, Eglinton-Lawrence.

“I am at the point where I would look at anything,” says Mr. Colle, whose ward includes the troubled Lawrence Heights neighbourhood. “Certainly my residents would not oppose it. … I think it might offer a bit of comfort to residents to know that police aren’t chasing fireworks.”

Toronto Police spokesman Mark Pugash says police here are familiar with the technology but wary, given some of the criticism in the United States: “We’re interested in leveraging technology and we’re looking at all sorts of things. But based on what we know now, it’s unlikely we will be going in that direction.”

The technology’s effectiveness has been hotly debated. A recent investigation by the Center for Investigative Reporting on San Francisco’s use of ShotSpotter revealed that in 3,000 alerts over 21/2 years, 20 per cent sent police to the wrong location. In two-thirds, no evidence of a shooting was found.

The investigation also concluded that the system contributed to only two arrests. In one case, a man who shot up a vehicle remained on the scene and was arrested. In another, police found a man unrelated to the shooting who was wanted on an outstanding warrant. 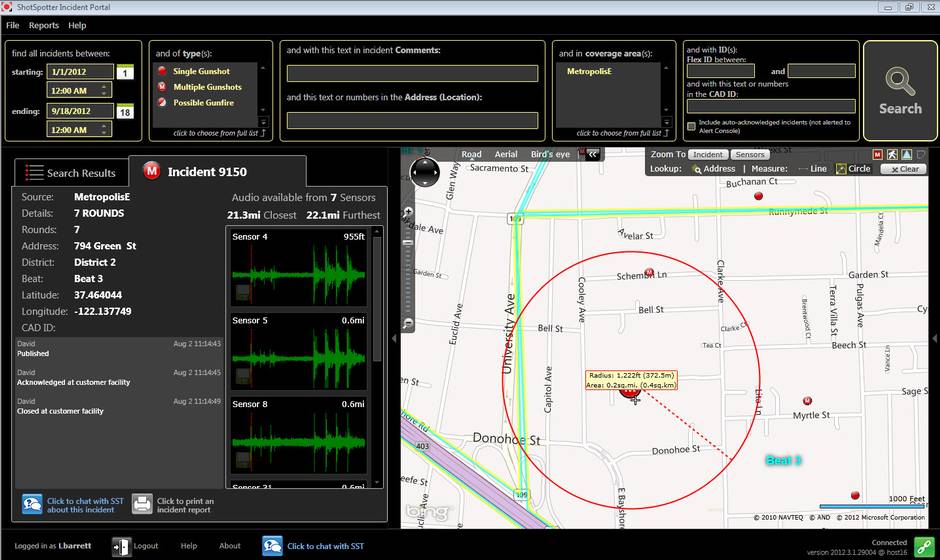 ShotSpotter is used in 90 cities across the United States, but its effectiveness has been debated and some critics have raised privacy concerns.

Critics have also raised privacy concerns, worried that ShotSpotter could pick up and record conversations on the street. In at least two cases, shouting just before or after gunshots has been recorded and used in court as evidence. But the company says the system is designed to ignore sounds that are not gunshots, cannot be used to eavesdrop and picks up speech only when it is loud and near a gunshot going off.

The company’s chief executive officer, Ralph Clark, 58, says those who only count how many arrests his system’s alerts produce are looking at the wrong metric. ShotSpotter gives police a much more accurate picture of when and where shootings are taking place – valuable data that can be used to figure out when and where officers should patrol, he explains.

“This is not a system that is designed to capture trigger-pullers in the act of pulling a trigger, although that does happen sometimes,” Mr. Clark says. “It’s really much more around having much better awareness of all gunfire activity that typically goes underreported.”

He says it also forces police to investigate every shooting, whether they find a body or not. This boosts the profile of police in neighbourhoods that often have a fraught relationship with them, he argues. Instead of driving around after a 911 call in the general area and not finding a gunman or a body, officers get out of their cruisers and look for shell casings and witnesses, he says.

That can help to restore trust between people in violence-plagued neighbourhoods and the police, Mr. Clark says. And when combined with other “community policing” and outreach measures, it can help to produce results: Some cities where ShotSpotter is in place, combined with other police initiatives, have seen 35-per-cent reductions in shootings, he says. “We’re a piece of their toolkit,” he says.

It costs $100,000 or more per square mile a year, with a typical installation in a city such as Toronto likely running about $500,000 annually, Mr. Clark estimates.

He says the system still has false alarms, and what he calls “mislocations,” where it botches the job of pinpointing a gunshot. But after 2011, these problems have decreased, he says, because SST changed its business model. It now owns and installs and maintains the equipment, rather than leaving that to cash-strapped police forces. And it uses its own trained staff to screen every gunshot call at its California control room to ensure that the computer gets it right.

Even some of ShotSpotter’s former critics have come around. Trenton, N.J., Councilman George Muschal, a 40-year veteran of the city’s police force, says the system produced countless false alarms and “wild goose chases” for officers when it was first deployed in 2009. It once failed to correctly locate a shooting, leaving a victim lying in the street on Christmas Day for hours, he says. While serving as mayor in 2014, Mr. Muschal tried to block a move to expand Trenton’s use of ShotSpotter.

But he said the new version of ShotSpotter system has improved and he believes that it is helping Trenton’s police track gun activity. However, he says its benefits should not be overstated: “If they’re saying you are going to catch anybody with it, I say it’s B.S. You’re not going to catch anybody with it. What you are going to do is find out if it was an active shot that went off, and then look for shell casings, and look for a body.”

Arrays of “acoustic sensors,” a little larger than a typical book, are mounted on buildings, rooftops or streetlamps. They are ideally placed about nine metres (30 feet) in the air, with about 15 to 20 required for each square mile.

The sensors are hooked to a computer system and a control room in California. When a sensor detects a loud boom, it sends an alert, with a time-stamp. Using GPS and sophisticated software, the system can triangulate precisely where the sound occurred, based on how long it took to travel to each sensor.

Ralph Clark, the chief executive officer of SST, the California company behind ShotSpotter, says the system uses a number of techniques to determine whether a noise was a gunshot or just a truck backfiring or a firecracker.

Plus, an SST staffer then reviews the sound to ensure that it is a gunshot, before the alert is sent to a police dispatcher – all within as little as 30 seconds.