The 15-year-old boy who was driving a minivan that crushed a police officer has been charged with first-degree murder.

The teen, who remains in hospital with serious injuries, was charged Tuesday night, York Regional Police said in announcing the charge on Wednesday. Media reports said Wednesday night that the boy is now a quadriplegic.

He is scheduled to appear in court on July 7. He cannot be named under the Youth Criminal Justice Act.

Alone on patrol, Constable Garrett Styles, 32, stopped the minivan in East Gwillimbury early Tuesday morning. He parked his cruiser directly behind the 2005 Dodge Caravan, walked up to it and discovered four teenagers inside.

The officer ran the van's licence plate, discovered the vehicle did not belong to any of the occupants and reached inside for the keys, a police source said.

At that point the van suddenly lurched forward, snagging Constable Styles and dragging him for about 300 metres. The driver lost control and the van rolled over on top of the officer.

A full police funeral for York Regional police Constable Styles will be held Tuesday in Newmarket. 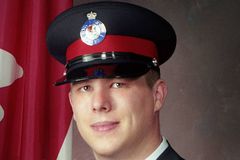