It began with an insult in the hallways of one of Canada's largest high schools.

It ended with the arrest of a 16-year-old male student charged with assaulting a police officer while resisting arrest - the first such incident since Toronto police began stationing officers in schools full-time last year.

The altercation, captured on video and an instant sensation on YouTube, highlights the ambivalence many feel about placing police officers in the halls of their local schools.

Toronto's school board expanded its police program this September after data showed schools with a full-time officer saw a drop in suspensions and criminal charges last year.

But at least one high school was forced to scale back plans to join the program when hundreds of parents protested, saying they feared it would create more problems than it solved.

The altercation happened Friday afternoon. A tall, goatee-bearded teen was hanging around the halls of Northern Secondary School, a well-regarded school of 1,700 pupils, when he crossed paths with Constable Syed Ali Moosvi.

The officer asked the student for his name and identification, which he refused to provide. A crowd gathered and the situation rapidly escalated.

"The cop was pushing the guy against the wall," Grade 9 student Levi Tobe said. "He kept telling him to put his hands behind his back."

Dozens of students gathered to watch the confrontation and profanities flew as cellphone cameras captured the scene. The student, who protested he had done nothing wrong, was eventually handcuffed and led away.

"If the cop wasn't there, this thing on Friday wouldn't have happened," Levi said.

Police presence in schools is often controversial, although Toronto is far from the only Canadian city where police patrol the halls. Vancouver, Edmonton and Winnipeg have also placed police officers in schools, a policy aimed at preventing crime and building positive relationships with at-risk youth.

Winnipeg's police service has been involved in school patrols of a more arms-length nature since 1936; Vancouver has had full-time school liaison officers in all the city's public high schools since the 1980s, and boasts that its officers are able to establish a real rapport with students who might otherwise view them with suspicion.

But as Toronto expanded its program from 30 to 50 schools this year, the school board encountered at least one pocket of determined resistance. At Toronto's Westview Centennial, a school in the Jane-Finch area with high rates of suspension and criminal charges, parents mounted a campaign to block the arrival of a police resource officer. They said their children felt school was a place where they should be safe from police harassment, not subject to further scrutiny.

Josh Matlow, school trustee for the district that includes Northern Secondary, said parents in his ward were close to evenly split over the officer's arrival.

"Some thought it was a great idea," he said. "Other parents had concerns. Some just didn't like the concept of police in schools. They thought that police should be in the rest of the community … Some had a problem with a [firearm]being in the building. Some just had ideological apprehension because they felt that police in the school might contribute to some kids feeling marginalized."

At Northern Secondary Wednesday, witnesses were divided on whom to blame for the altercation.

Levi said Constable Moosvi should have ignored the "bacon" comment, noting that in a classroom a week earlier he had said he wasn't bothered by the insult because his goal is to build relationships with students.

But Simone Osondu, a 17-year-old Grade 12 student, said the officer was provoked to a point he couldn't ignore, and that the student was afraid of losing face if he backed down.

"They got in too deep," she said. "It was either finish this now or you're going to be arrested."

She said security at the school has been significantly stepped up in the last year.

Students are keenly aware they must wear student ID lanyards around their necks, which must be produced when staff ask. Students are regularly barred from class if they fail to display them, Ms. Osondu said.

The student who was arrested was wearing his lanyard at the time, classmates say.

"As long as you have one, people shouldn't harass you," said Grade 9 student Cheyenne Bernier.

Christian Pereira, in Grade 11, said he knows the arrested student from shop class.

"He's popular, never does anything wrong. We're all shocked to see this," he said.

"He said something to the cop - bacon - but it was just a joke."

Constable Moosvi was slightly hurt in the resultant melee.

What prompted his initial interest is not shown in the video clips, but police insist the incident's origins were straightforward: The youth was loitering in the corridor and when asked to identify himself, he refused to do so and started walking away.

"That led the officer to believe he was a trespasser who didn't belong in the school," said Constable Wendy Drummond.

"That caused concern, making the officer think, 'What's this person hiding?' One of the reasons for the officer to be there is to create a safe atmosphere."

And for all the uproar during and after the confrontation, the video clips vindicate Constable Moosvi's actions, Constable Drummond said.

After being arrested, the student was released on an undertaking. He is suspended from school and the board is investigating whether to transfer him elsewhere.

"The preliminary feedback appears to be very positive," she said.

"The police are in a wide range of recreational activities with the students, and the majority of schools appear very satisfied with having an officer on site, as do parents and students."

With a report from Anna Mehler Paperny 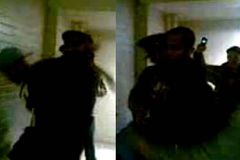 Follow Joe Friesen,  on Twitter @FriesenJoe
Report an error
Due to technical reasons, we have temporarily removed commenting from our articles. We hope to have this fixed soon. Thank you for your patience. If you are looking to give feedback on our new site, please send it along to feedback@globeandmail.com. If you want to write a letter to the editor, please forward to letters@globeandmail.com.
Comments are closed