There's a no-nonsense advisory Oshawa Mayor John Henry reads out at the start of each council meeting: if you misbehave, you'll get booted out. That would be an extreme warning if it weren't for the fistfight that broke out at a meeting a year ago.

Oshawa's council is among the most fractured in Ontario: Many debates pit the majority of eight against a rogue pack of three, and the jeering from the public gallery and deputations from enraged residents at meetings often give council chambers the vibe of a daytime talk show. After residents cast their ballots on Oct. 27, the spectacle could become even greater.

The residents who act as municipal watchdogs aren't just thorns in councillors' sides at meetings; they're challenging them for their jobs. In the last election in 2010, the city switched over from electing councillors by ward to an at-large system and had a turnover of seven in its 11-member council. Outspoken members of the public gallery plan to challenge the current incumbents by putting their own names on the ballot this fall.

The recent change at council came as Oshawa was going through a fundamental transition. Throughout its history, the blue-collar city of about 150,000 in the eastern GTA has been defined almost exclusively by auto manufacturing – it's home to the headquarters of General Motors Canada. But the economic downturn of 2008 had a devastating impact on the city, and it has tried to forge a new economic path beyond auto manufacturing. This puts public scrutiny of city spending at an all-time high.

While many campaigned on platforms to freeze or minimize taxes in 2010, only a few have stuck by it. And so two groups have formed: the majority – Mayor John Henry and Councillors John Aker, Roger Bouma, Bob Chapman, Nancy Diamond, Amy England, Nester Pidwerbecki and Doug Sanders – and the unofficial opposition – Bruce Wood, John Neal and Tito-Dante Marimpietri, who are backed by many outsiders. The so-called "Bloc of Eight" are routinely accused of being spendthrifts by their opponents, and of voting in co-ordination. The controversial purchase of a property on Wentworth Street last year has been a flashpoint, one whose effects are still echoing in council. Meanwhile, in a February report, the Conference Board of Canada said the city's growth was at the slowest it has been since the 2008-2009 recession.

Some of the "Bloc of Eight's" most outspoken gallery critics think the only way to improve the city's economic health is to overhaul council.

Among them is Bill Steele, who is running for council after earning a reputation as one of council's most prolific agitators, taking on Councillor Roger Bouma with allegations about his business practices and councillor Amy England for possibly breaking election finance rules. (Mr. Bouma threatened to sue Mr. Steele for libel, but never did, although he denied the allegations; Ms. England's spending was found to be in compliance with the Municipal Elections Act).

Mr. Steele unwittingly put Oshawa in the national spotlight when he became the star of a viral video filmed last September in council chambers. In it, a security guard asks him to leave on request of the mayor, he is wrestled to the ground by the guard, a fistfight ensues and then two undercover police officers join the fray and arrest Mr. Steele. With a reddened face and a cut on his nose, Mr. Steele is led away in handcuffs. Dan Hammond, another council opponent, was also charged with assault at that meeting and arrested.

The altercation stemmed from a city purchase last year. In the spring, the majority of eight councillors voted to earmark $25-million for a new operations centre in the south end of the city and eventually spent $5.9-million to buy a building at 199 Wentworth St. E (the remaining funds were to be spent on upgrades to the site). In May, the city's auditor-general, Ron Foster, released a damning report saying the city not only overpaid for the property – by up to $1.6-million – but that city staff interfered with his investigation of the deal and tried to intimidate him.

Mr. Foster's report prompted the city to hire George Rust-D'Eye, a municipal lawyer who has previously represented Toronto Mayor Rob Ford, to investigate. In his report, Mr. Rust-D'Eye concluded the city had not, in fact, overpaid for the property. He raised questions about Mr. Foster's credibility and suggested the city do away with the position of auditor-general. Council voted 8 to 3 to do just that. Residents were outraged. The fistfight occurred the night his report came to council.

Last winter, charges against both Mr. Steele and Mr. Hammond were dropped. The security guards who apprehended them were then charged with assault, but those charges were also dropped in May. But Mr. Hammond, who is running for mayor, is in legal trouble again. He was arrested Sept. 9 and charged with criminally harassing a public official. According to local media reports, Mr. Bouma was the target of the harassment. When reached by phone by The Globe, Mr. Bouma, who is not seeking re-election, said he would not be commenting on the incident.

A year after the city council fist fight, Mr. Steele says residents have taken a back seat to business interests. "You have to have a council that works together really well. Not have this type of bullshit that goes on," he says.

Relations are so strained at city hall that outside observers from Toronto have little optimism about its future.

"My perception of what has happened in Oshawa is that it's really just deteriorated now … I'm not sure with the groups that are currently in place if there's any way for them to reconcile their feelings for one another," said Cara Zwibel, the director of the fundamental freedoms program at the Canadian Civil Liberties Association, who has attended a few council meetings.

When asked if the city was at any kind of loss not having an auditor-general, Mr. Henry pointed to how the city had passed a budget with a tax increase below the rate of inflation without one. He also stood by his decision to have the two men booted from the meeting."Whether the charges were dropped or not, [that] doesn't mean the actions didn't warrant the ask for removal," said Mr. Henry, who is seeking re-election.

The memories of the incident are still fresh. When Rosemary McConkey, another fixture at city meetings, addressed council in March, she began her deputation by saying, "First, I would like to ask if there are any Durham Regional Police Service officers here with concealed weapons?" – a question that prompted a chorus of guffaws from the public gallery. Mr. Henry responded that he would not know even if they were since his office does not dictate police action.

"There's a lot of people who say they're very uncomfortable with going there," says Cathy Clarke, another opponent of the "Bloc of Eight." She previously served on council and ran for mayor in the last election. "That's what people are afraid of: 'What if I shout out? What's going to happen to me?'"

At the suggestion of the Canadian Civil Liberties Association, council created a public participation committee; residents applied and five were selected by councillor votes. But because the so-called "Bloc of Eight" exists on council, none of the most outspoken critics made the cut, points out Tim Bird, part of the watchdog group Awareness Oshawa.

"They're people who are already in the choir," he said.

And so they've turned to other means. Many of council's critics have approached meetings as a space to take on the individuals they hope to beat at the polls in October.

Mr. Hammond, despite criminal charges, is seeking the mayor's seat and so is Ms. McConkey. Also gunning for the mayor's job is Lou DeVuono, who is in the middle of a legal battle with the city following a 2011 dispute. Earlier this year, Mr. DeVuono called for the mayor to step down from the police services board due to an alleged conflict of interest: Mr. DuVuono and others believe the mayor had some involvement with the "beatdown" of Mr. Steele and Mr. Hammond last year – something Mr. Henry vehemently denies. Bill Longworth, another critical deputant at meetings is seeking the job of mayor. Robert Lutczyk, a former councillor who lost his re-election bid in 2010, had also tried to get on the ballot to run for council, but did not make the Sept. 12 deadline for registration. Mr. Lutczyk made headlines in 2012 when he allegedly abducted city solicitor David Potts and held him for hours during a police standoff in Whitby. He is currently being held at the Central East Correctional Centre in Lindsay, Ont., awaiting trial.

One of the few members of council hoping for an overhaul this fall is Bruce Wood, a member of the three-man minority. He has allied himself with many of Oshawa's so-called watchdogs and originally brought the assault charges against the two security guards before the Crown took them over.

At a spring council meeting, when Mr. Wood spoke out against one opponent councillor, he said the same councillor threatened him during a break in proceedings. He said that won't muzzle him, nor should it muzzle residents.

"When you have a municipal government as close to the services as what we have, that affect lifestyles more than any other level of government, people are going to get passionate," he said. 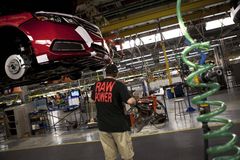