One is a high-profile entrepreneur who used to own the Argos. The other is an ambitious fitness trainer with dreams of turning his gym into an L.A.-style health bar. Their souring business partnership has become the talk of Forest Hill Village.

David Cynamon is suing his former personal trainer Larry Track for $800,000 and alleging that the owner of Track Fitness has failed to comply with the terms of a loan agreement signed more than two years ago.

The business relationship between the two men, which an Ontario Superior Court judge recently described as starting with "a high degree" of trust and optimism, has now spun into an acrimonious court battle, with name-calling and the success of the popular fitness studio possibly hanging in the balance.

Already, Mr. Cynamon has been unsuccessful in an attempt to get a court order to force the club, which continues to operate, into bankruptcy. Mr. Cynamon, 50, perhaps best known for co-owning the Toronto Argonauts with developer Howard Sokolowski between 2003 and 2010 and rescuing the team out of bankruptcy, started working out at Track Fitness four years ago. Impressed with its operations, Mr. Cynamon soon signed up for daily personal training sessions with Mr. Track. By the end of 2012, Mr. Cynamon agreed to lend $800,000 to Mr. Track to help finance an expansion to the size of the fitness studio. Mr. Cynamon also received a 40 per cent stake in its ownership, until his money was repaid.

Mr. Cynamon is the co-founder and executive chairman of water treatment company K2 Pure Solutions Inc. Recently, along with Mr. Sokolowski (the husband of Senator Linda Frum), they donated $5-million for a Jewish community centre in Toronto. The society pages also frequently picture Mr. Cynamon and his wife, Stacey, at charity galas.

Ms. Cynamon, the daughter of the late private label soft drink executive Gerry Pencer, is an officer of a charity named after her parents aimed at improving the quality of life for people with brain tumours. In 2012, the couple, who also oversees its own charitable foundation, were included in Toronto Life's list of the 10 individuals and couples who host the city's "most pre-eminent power parties" at one of the three homes they own in Forest Hill.

Mr. Track, who has been a personal fitness trainer for 15 years and started Track Fitness in 2005, states in the court documents that he routinely works 16 hours a day at the club - which has steadily expanded over the years, going from 1,000 square feet to its current space of 10,000 square feet.

The business arrangement "was not the type of transaction I would normally do," said Mr. Cynamon in an August, 2012 e-mail included in the court documents. "But I really believe in you and your dream and realize that without my capital you would have difficulty expanding your business to the new space and next level of success," he said in the e-mail to Mr. Track.

Within a year, a frustrated Mr. Cynamon wanted to be bought out and suggested Mr. Track had failed to develop a "coherent plan" for the club's financial success. Mr. Cynamon said last fall he was willing to accept $1-million to be bought out, which he described as a "very modest profit" in an e-mail message to Mr. Track.

Instead of a resolution, the two men traded occasional messages, with very different interpretations of the club's financial operations.

Court records show Mr. Cynamon alleged the club generated nearly $1-million in net income since 2012. In response, Mr. Track's lawyers argued that there was a net loss of about $140,000 when taking into account funds that had to be set aside for operating expenses.

The fitness club owner said the agreement was always clear that Mr. Cynamon would be repaid once the club had positive cash flow. The "vision" for Track Fitness that the two men shared, "came with a price tag," said Mr. Track in a sworn affidavit, adding that the club's financial situation has finally turned the corner.

Mr. Cynamon is described as an "experienced, successful entrepreneur," by Mr. Track in his affidavit, yet his demeanour comes in for criticism. "In passing, David consistently speaks to me, and about me, with such a condescending tone, despite the fact that he knows that the business has had no excess cash flow until recently in light of the significant capital expenditures," states Mr. Track.

Some e-mail and text message correspondence are included in the court documents by Mr. Track to try to back up this assertion. In a December, 2013, e-mail, Mr. Cynamon writes, "the $38K would have been interest for a few months, but sure, go ahead and deduct if that makes you feel good." (Mr. Track states in his affidavit this shows how much as been repaid so far).

In another e-mail, sent in January, Mr. Cynamon suggests clients are leaving because of the way they are treated by Mr. Track. "You wonder why all our communication is negative … it's because the news is negative."

"I don't need a Monday morning quarterback," Mr. Track responds in an e-mail. "What have you really tried to do? What extra effort have you really given other than workout with me at 5 a.m. and give me your opinions … if I had the cash now I would have already bought you out," he writes.

After lawyers for both sides failed to reach an agreement to settle the dispute, Mr. Cynamon launched the court action in May. None of the allegations have been proven in court.

Justice David Brown found that Track Fitness had failed to provide certain financial statements and its legal arguments were an attempt to "rewrite" the terms of the loan. But the judge declined to appoint a receiver because of a term in the loan agreement meant that Mr. Track was not in default.

"Whatever may be the present financial circumstances of Track Fitness, Cynamon agreed to link the risk of the repayment of his loan to the ability of Track Fitness to generate a sufficient amount of net income to cover a reasonable reserve for future operating expenses. If the company could not do so, the obligation to repay would not arise," wrote Judge Brown.

The decision means that there will be no forced sale of Track Fitness, which is seeking outside investors, according to the court documents. But the legal dispute between Mr. Cynamon and Mr. Track continues.

The bankruptcy motion ruling "is part of a larger proceeding that is still ongoing," said Francy Kussner, the lawyer for Mr. Cynamon.

Steven Graff, who represents Mr. Track, is hopeful that both sides can reach a settlement and said it is "business as usual" at Track Fitness. "My client is a hardworking entrepreneur who would like to continue successfully running his business," said Mr. Graff. 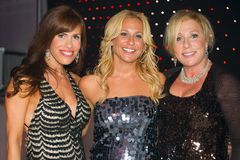 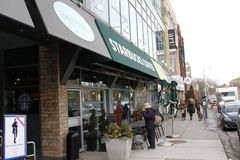 Pensioners get flexible with parkour
July 3, 2014 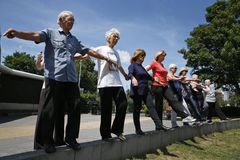 How can a modern mom maximize her workouts?
April 8, 2010 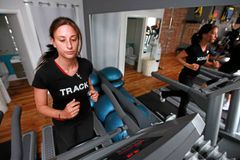