Sears at the Eaton Centre is facing its end of days. The retailer has had a troubled few years in both the United States and Canada, selling off many assets and laying off thousands of its staff to cope with declining revenues. Last fall, it announced it would be closing its flagship store at the Eaton Centre as well as its locations at Sherway Gardens, Yorkdale Shopping Centre and Mississauga's Square One among others across the country. It has been staging liquidation sales at its urban locations for months.

This past Thursday, I spent hours exploring the ruins at the Sears flagship store to document its dying days (the store closes for good on Feb. 23). I stealthily took notes, snapped dozens of mobile photos and spoke to a handful of customers, all without receiving a single, "Ma'am, I'm going to have to ask you to leave."

10:02 a.m. The retailer's massive second, third and fourth floors have been gutted. I begin my tour on the second floor, which is the eeriest, as it has now become an emporium for store fixtures: rows upon rows of dinged-up file cabinets with labels still on the drawers, squeaky office chairs with soiled upholstery, a binder containing a $1 "Attendance Management Guide." There is a church rummage sale-type table strewn with odds and ends, some of which have been deemed unworthy of a price sticker. Atop this heap of particle board scraps, "dummy fragrance bottles" and dog-eared romance novels is a crumpled paper napkin that looks like it was discarded after tending to a nosebleed. Throughout the day, a message comes on the intercom, informing shoppers that today only, Sears is offering 20 per cent off its fixtures on the second floor. "You snooze you lose," says the upbeat male voice.

Making the Eaton Centre location profitable was always a struggle for the brand since it tends to fare better in suburban and rural locations, says Maureen Atkinson, a senior partner at retail consulting firm J.C. Williams Group. But its problems extend beyond that location.

Ms. Atkinson points to a shift in class in Canada: Incomes at the high end have grown while those in the middle have stagnated. While this is a national phenomenon, Toronto is suffering the most from the erosion of the middle class, a theme that came to define last fall's by-election in the federal ward of Toronto Centre.

11:18 A.M. Following a repeated offer over the intercom for a "free gift," about 30 people have assembled at the "free gift counter" (marked by the sort of rotating, multi-coloured light often found in a middle school dance DJ's setup kit). "Are you curious or excited?" a somewhat bored-looking woman in a burnt orange sweater asks, trying to amp up the crowd. "Curious!" one woman says with a grin, revealing she has never been suckered into a gift-offer-turned-product-demonstration-turned-sales-pitch at a department store before. If I'm not mistaken, this is the same product pitch for the same product (Magicloth, a ShamWow-like absorbent towel) my father and I heard at a Sears location in suburban Winnipeg in 1998. It seems the script has been slightly modified to make it more au courant: the woman tells us this is the same cloth used by an Olympic diving team and that "Morgan Freemand" used it in a movie once. By the end of the 15-minute pitch, five die-hards remain. They go home with free mops.

The luxury department store chain Nordstrom will be moving in to Sears's space, and Saks will be setting up shop in the Hudson Bay building at Yonge Street and Queen Street West. The Bay has gone more upscale to stay relevant.

But Sears doesn't have the quality merchandise to position itself among high-end retailers, nor can it match the prices of lower-middle ones such as Wal-Mart, Ms. Atkinson explains. "They play in this in-between world and that's been the challenge for a lot of department stores around the world."

11:56 A.M. Milling about the women's shoe department, a pair of casual sandals in hand, an older Asian man asks a clerk about getting a Sears credit card. "Different from MasterCard?" he asks. In a move that probably goes against everything taught in sales training, the sales associate says yes, it's different, but he can just use his MasterCard, likely in an attempt to protect him from getting stuck with a card whose main perks will soon be inaccessible.

Just a decade ago, 61 per cent of store sales – worth $6.6-billion – were done on Sears credit cards, according to Mark Cohen, who was CEO of the Canadian operation at the time and now teaches marketing at New York's Columbia University. The credit card division, a cash cow for the company, was sold to JPMorgan Chase & Co. in 2005 for $2.2-billion. JPMorgan, rather than Sears, has been providing service to and profiting from Sears Card and Sears MasterCard holders since then.

The chain will still operate stores at Scarborough Town Centre and Fairview Mall and focus more on its presence in suburban and mid-size markets. In October, when the company announced it would sell off leases of its urban stores, Sears Canada CEO Doug Campbell said in a release the plan would give the company "significant financial benefit" and "make Sears more relevant to Canadians."

12:20 P.M. As I gawk at a two-tiered metal cart piled high with decapitated toddler mannequins, an employee sidles up to me. "Sorry, those are heading to – where are those going?" he picks one up and turns it over to read a label. "They're going to Chatham." He motions to a small herd of snow-white adult mannequins down the way, "And those poor guys down there are off to Sault Ste. Marie." He shakes his head in pity and wanders off as The Fly's Got You (Where I Want You) plays over the speakers.

The retailer has faced myriad problems in the past two decades, Mr. Cohen says. Sears got in over its head with the Eaton's acquisition in 1999 – it spent millions trying to relaunch the Eaton's brand but faced numerous challenges and eventually threw in the towel in 2002, converting the relaunched Eaton's outlets into Sears ones by 2002. The company continued to veer off track that decade and into this one because, even as profits decline, it continues paying dividends instead of re-investing in its stores, Mr. Cohen says.

12:51 P.M. Gone are the days of the olfactory assault on the main floor of the store where the Estée Lauder, Elizabeth Arden and Clinique cosmetic counters are clustered. They're all gutted now, save for the "Intensive Spa" booth. The saleswoman, who has lined her eyes in turquoise, tells me, "We can leave whenever we want" – which means her booth is staying here till the bitter end. After dozens of customers stream past her, ignoring her product trial offers, a man in a motorized scooter with a Montreal Canadiens backpack on its handles takes mercy on the saleswoman and submits to a hand revitalization treatment.

While the closeout sale has been a boon for many customers looking for a deal, ringing up final sales weighs heavily on employees, Mr. Cohen says. "Going out of business events are ugly under any and all circumstances. They become increasingly grim as the merchandise disappears and the staff becomes more and more disheartened."

1:08 P.M. I run into Martin Pinto, 48, who works as an assistant professor of family medicine at Hamilton's McMaster University and lives in Etobicoke. He's clutching two bags full of Sears loot: a 49-cent Christmas tree, a $6 pair of shoes and three shirts that cost a total of $12. In the past two weeks, he's hit up the closing sales at Sherway Gardens and Yorkdale as well. "I don't care, let them close down. I'm here like a vulture to pick on the dying thing," he says. 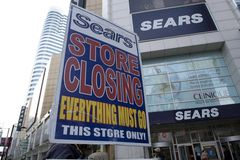 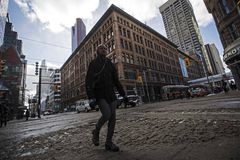 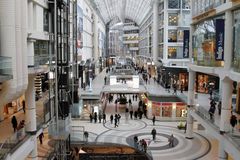 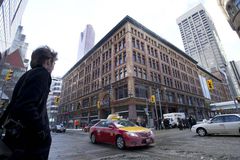 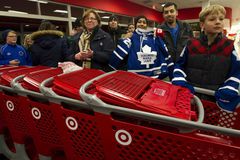