After 10 months of extraordinary twists and turns, noisy debates and intense campaigning, all that's left is the voting – and, for the top three mayoral rivals, getting out the vote.

The on-the-ground effectiveness of campaign organizations for front-runner John Tory, Doug Ford and Olivia Chow will be tested as thousands of volunteers fan out across Toronto Monday to get their candidate's supporters to the polls. On the line is the mayoralty of Canada's largest city after four sometimes bizarre years under Mayor Rob Ford.

Though he has consistently trailed Mr. Tory in election polling, Doug Ford insists that it all comes down to whose supporters actually vote: "Whoever gets their vote out is going to win this election and we plan on getting the vote out," he said during a campaign stop Sunday at a Scarborough mall.

All three campaigns will have vast networks to get their supporters to the voting booths.

Mr. Tory's people say they'll deploy 4,000 volunteers and post 250 lawyers at polling stations. Sophia Arvanitis, Mr. Tory's election-day director, said volunteers will be allocated across wards based on the number of identified supporters in each area.

Tory volunteers will be working the phones, knocking on doors and distributing "vote today" cards at the homes of identified supporters. The campaign has also set up a "ride hotline" to connect volunteer drivers with supporters who need to get to their polling station.

Mr. Ford said his team will be using robocalls, as well as "hundreds and hundreds" of volunteers, to make sure people they have identified as supporters get to the polls. He said special attention will be paid to residents of Toronto Community Housing, repeating his assertion that they could "change" the election.

"You don't need a voting card. Show up with a piece of ID and don't let anyone try and intimidate you," he advised at one point. "I've never heard of anyone getting 250 lawyers out there. Maybe he's expecting something, I'm not. Again, that says it all about Mr. Tory."

The Chow camp will deploy more than 6,000 volunteers and have 97 staging locations across the city. The organizational structure is named for a snowflake but resembles more a pyramid, with responsibility for smaller and smaller areas being assigned as the model works its way down to the neighbourhood level.

Chow spokesman Jamey Heath said that they are hoping for a boost from their get-out-the-vote efforts. The effect would be more pronounced if voter turnout was low, he added, but they expect turnout to be relatively high.

A long series of polls show this to be Mr. Tory's election to lose. Mr. Ford and Ms. Chow have fluctuated for months without seriously challenging the front-runner's grip on the race. But voting intention and actually casting a ballot are often very different, meaning the campaigns are pouring resources into identifying supporters and persuading them to go out and vote. It's the last act of a campaign that has turned into a gruelling marathon.

Candidates were allowed to throw their name into the hat as of Jan. 2, and Rob Ford was there to sign up that day. Mr. Tory, Ms. Chow, and dozens of less well known candidates entered in the following months.

The first earthquake to hit the campaign was Rob Ford going to rehab, after The Globe and Mail unearthed a second video of him smoking what appeared to be crack cocaine. He returned at the start of July, around the same time Mr. Tory supplanted Ms. Chow atop the polls.

An already unpredictable race swerved into uncharted territory in early September, with the mayor announcing that he was being checked for a tumour. Mr. Ford had to make a decision about his electoral future before learning his diagnosis and decided to run instead for council. His brother took up the Ford family mantle, running for mayor in his place.

Although Doug Ford was a familiar figure at City Hall, he was a wild card in the mayoral race. His first debate was a fractious introduction. He was combative and the usual partisan heckling from the crowd was at a fever pitch. Among the audience was a man who urged Ms. Chow to "go back to China." The event suggested the remaining debates would be a coarse affair, but a calmer equilibrium was found.

On Thursday, the last of more than 50 mayoral debates was held. The candidates had their lines down pat. There were still attacks and sharp digs, but there was also a familiarity. And perhaps a joy that this was the final time they would have to do this. The eternal campaign was nearly over and it would be up to voters to make their decision. 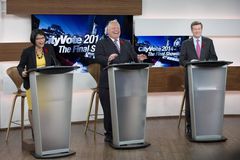 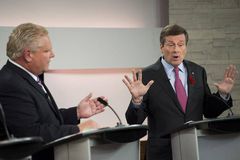 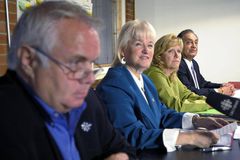 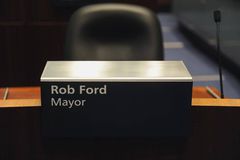 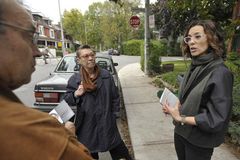 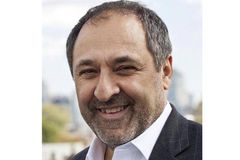 Follow Oliver Moore, Elizabeth Church and Ann Hui on Twitter @moore_oliver @lizchurchto @annhui
Report an error Editorial code of conduct
Due to technical reasons, we have temporarily removed commenting from our articles. We hope to have this fixed soon. Thank you for your patience. If you are looking to give feedback on our new site, please send it along to feedback@globeandmail.com. If you want to write a letter to the editor, please forward to letters@globeandmail.com.
Comments