Along the gritty, drab stretch of Eastern Avenue between Carlaw and Logan Avenues, more than one shabby storefront has a sign of warning to any would-be intruders: “Beware of Dog” at one place, and, at another, “Dog on Duty.” But there was a time in the neighbourhood when an angry pitbull would be the least of a punk’s concern.

For at 498 Eastern Ave. was an inelegant cinderblock establishment known to be the downtown clubhouse for the Toronto chapter of the fearsome Hells Angels. But these days, on the concrete-shielded steel front door, the outlaw bikers’ logo is barely discernible – a fading scar that remains after the gang was booted from the building after a police raid in 2007. The ownership of the land and building – commandeered by the federal government under proceeds-of-crime legislation – has been in dispute since then, but a court decision recently gave Ottawa permission to sell the 30-by-120-foot property.

The plot and its eyesore pile have now been conditionally sold, sealing the fate of a colourful part of Leslieville’s rough-and-tumble past that existed right under the noses of long-time area residents, who barely even noticed the quietly operating hooligans in their midst.

So long then, Angels, we barely knew you. 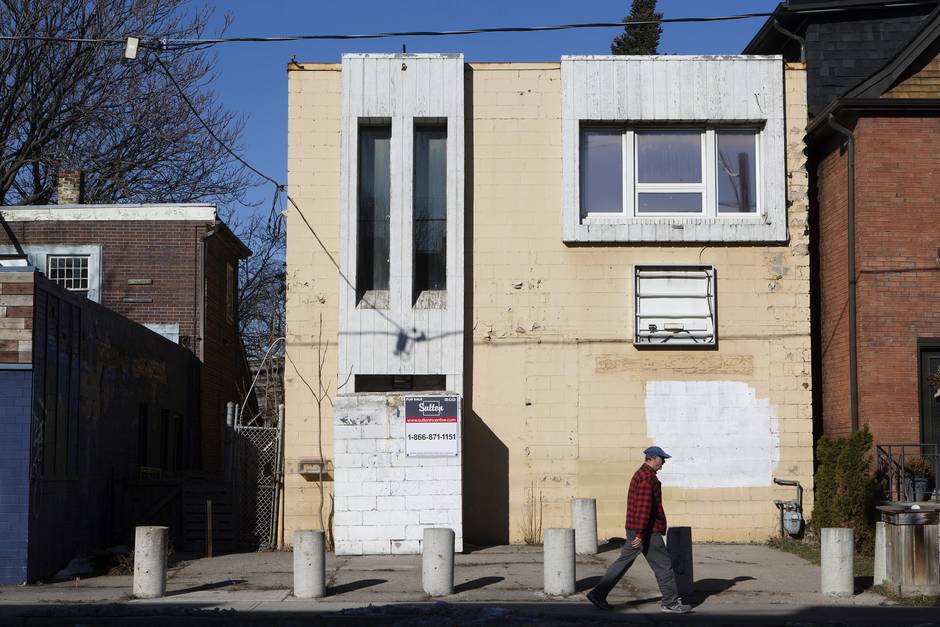 The former Hells Angels Clubhouse, which was seized by Toronto police, is located in the family-friendly neighbourhood Leslieville. (Michelle Siu for The Globe and Mail)

Once the social club of the Para-Dice Riders Motorcycle Club, the building was taken over by the bigger gang when the local Para-Dice bikers folded into the Angels in 2000. The beer-swilling playhouse was reputedly the Angels’ nerve centre in Ontario and was believed to be the largest Angels chapter in Canada.

That all changed on the morning of April 4, 2007, when police breached the fortress by ripping a gaping hole in its pale-yellow front wall, using a hook mounted on the back of a truck. The outline of the long-since refilled opening is still visible.

The raid was part of a nationwide sweep that resulted in 30 arrests and yielded large stashes of guns and drugs, including a substantial quantity of GHB, popularly known as the date-rape drug. The Angels were ordered to quit a clubhouse where, apparently, rules forbade only two things: murders and wives, though the former condition probably wasn’t a deal breaker.

According to real estate agents familiar with the listing, three offers were made on the red-hot Leslieville location, with the conditional winning bid coming in at “well-over” the $649,900 asking price. “It’s a very hot property,” says Desmond Brown, one of the handful of agents allowed to view the building’s interior recently. He describes the facility as something comparable to an old-time Legion hall, with a meeting room and a bar on each of two floors now empty except for just one thing.

“On the staircase landing between the two floors is an aquarium,” says Mr. Brown, who also noticed steel mesh on the inside of the non-descript building’s windows.

An aquarium? Nothing fishy about that, really.

In all likelihood, the clubhouse will be razed, making way for a residential building no doubt more pleasing to the eye. “Nobody wants a bunker that’s just empty and derelict,” Ward 30 Councillor Paula Fletcher says. “It will be quite welcome to have something that looks good and freshens up Eastern Avenue on the north side.” 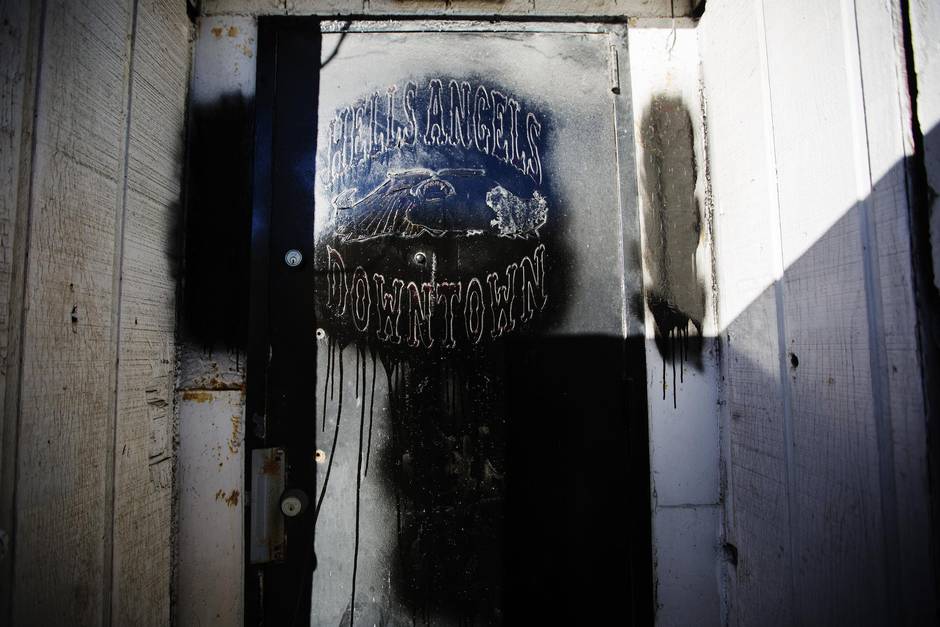 The doorway of the former Hells Angels clubhouse, which has been unoccupied since a police raid and seizure in 2007. (Michelle Siu for The Globe and Mail)

That being said, any new structure would almost certainly be deficient in any sense of edge or history for which the formerly blue-collar neighbourhood was long known. “We’re definitely trendying up,” says Shawna Fletcher, a real estate agent who lives near the old clubhouse. “When I first came to the neighbourhood in 2000, there was one nice restaurant. Everything else was a little smoky hole in the wall, where they served beer and all the men had mustaches that were yellow from smoking.”

Asked about the Angels’ attendance in the neighbourhood when the clubhouse was still active, Ms. Fletcher doesn’t remember the presence of the hellions as being particularly visible or palpable. “I wasn’t aware of them,” she says. “And I never heard of anyone up in arms about them.”

Her blank recollections are shared by local merchants. “I had no problem with them,” says Anna Zupevc, the chatty Slovenian operator of an old-fashioned barbershop nearby on Queen Street East. Did she cut the Hells Angels’ hair? “Not that I know of. They all wear ponytails, no?”

Across the street at Queen and Jones Pawnbrokers, a cluttered emporium for two decades, the Angels’ reputation was just as vague. “They didn’t come in here,” owner Binh Tran says. “People only come in here when they need money.”

Adds James McKinnon, the burly proprietor of the long-standing burger joint Dangerous Dan’s a few blocks away in Riverside: “From my point of view, they were good neighbours.”

Mr. McKinnon’s milkshakes frosted the facial hair of Hells Angels and other area motorcycle enthusiasts (including members of low-riders the Vagabonds and the Bandidos) for years. “They wanted to keep things quiet,” he says. “Their club was like the Cub Scouts, but with lots of booze and drugs.”

Banished from their stomping grounds, the Angels (whose current clubhouse is believed to be a rental in Parkdale) still maintain a presence in Leslieville. A small retail operation on Carlaw Avenue south of Eastern Avenue sells Hells Angels-related merchandise. “We’re like the Gap,” a tight-lipped woman at Route 81 told a reporter this week, before clamming up. 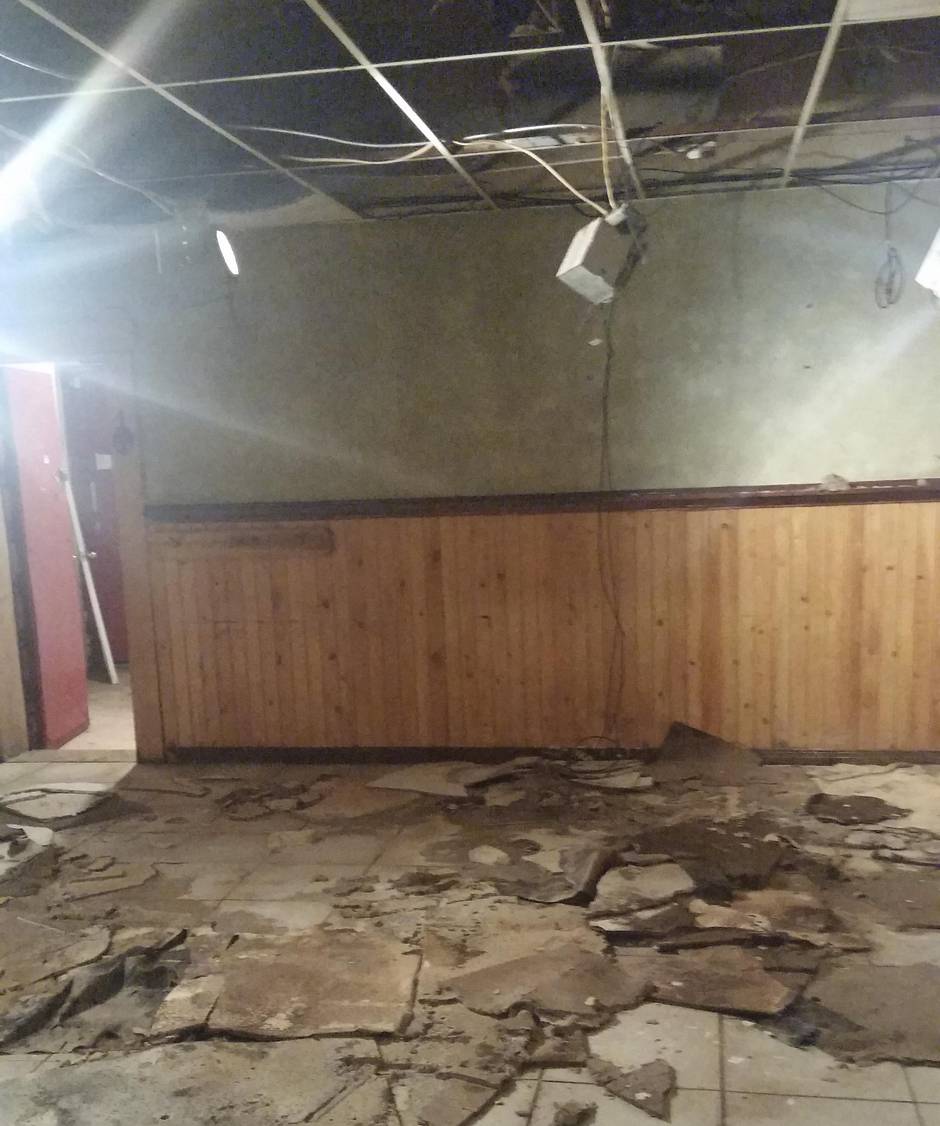 Interior photos of the former Hell's Angels clubhouse in Toronto on Eastern Avenue. The property is now for sale. (Photo courtesy of Desmond Brown)

The clothing shop sells red-and-black wear, including un-Gap-like goods such as trucker hats emblazoned with “Disobey,” a Hells Angels Ontario 15th-anniversary calendar and, for $20, pairs of “woman booty shorts.”

Despite the scandalous products and nefarious reputation connected to them, the store’s lively online website is plastered with photos of family-friendly events, including festive happenings there at Halloween and Christmas. “They have a very good public-relations department, but they are still a criminal organization and the police are very aware of the kind of business they’re in,” says Jonathan Morrice, the crime-prevention and social-media officer attached to the Toronto Police Service’s 55 Division.

But whatever business the Hells Angels are in, their former headquarters at 498 Eastern Ave. is soon to be a thing of the past, the barbed wire to be removed and the concrete barriers to be bashed. When asked to comment on the building’s historical significance, Mary MacDonald, speaking for the city’s heritage preservation services office, said despite the property’s “colourful associations,” she didn’t see anything particularly unique to the bunker-like building and didn’t anticipate it being considered for heritage designation.

And so a piece of history in a gentrifying neighbourhood will pass without commemoration. No plaque, just another sign of the times, and the Hells Angels, who did their thing on the lowdown and behind barricaded doors, probably prefer the lack of fuss anyway.