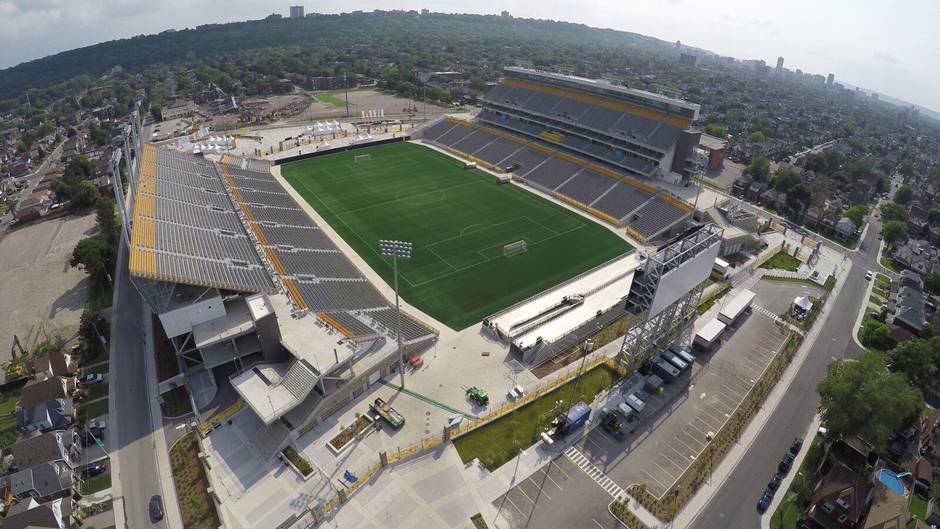 Moe Masoudi/Moetion Picture for The Globe and Mail

After their hopes were dashed again and again, the expectations among members of Hamilton city council were low. Would the elite soccer players from across the Americas coming to town in July have a chance to sprint, leap and tumble on the turf of the new Hamilton Pan Am Stadium as planned? Or would the most popular event of the 2015 Games have to be relocated because of yet another missed deadline, leaving the city with egg on its face?

The stadium, to the relief of the city, was finished at the end of May, but almost a full year after it was supposed to be ready. Construction of the $145-million venue has proved to be the most tumultuous of all the facilities built for Pan Am, marked by lengthy delays and a long list of setbacks that cropped up over the past two years. And the turmoil isn’t over yet. After the Games have wrapped, lawsuits are likely on the way. And while the province selected a procurement model that would protect the taxpayer from cost overruns, it failed to deliver a facility on the date promised.

The reasons for the delays were many. Initially, builders said an unexpectedly harsh winter was to blame. Later, it was revealed that the construction team encountered significant stumbling blocks during the building process: A faulty caulking job in the stands had caused leaks that damaged rooms below, and miscalculations of materials needed in the stands to support the weight of 24,000 spectators meant major, expensive changes mid-build.

As a result, the deadline for completion was revised repeatedly after construction began in May, 2013.

There was the one on June 30, 2014, more than a year before the first soccer match of the Pan Am Games. Builders missed that, but then said the stadium would be done in time for the Labour Day Classic, when the Hamilton Tiger-Cats would be kicking off their first Canadian Football League game in their rebuilt home, now called Tim Hortons Field. It missed another deadline at the end of October, when a soccer tournament – a test event – was to take place. The stadium wasn’t done in January, as promised, or February either. Finally, in May, the venue was deemed “substantially complete” and officially opened.

Hamilton city councillor Lloyd Ferguson, who chairs the Pan Am Stadium subcommittee, believes a strongly worded letter sent at the end of April from the mayor’s office to Infrastructure Ontario and the Premier’s office was what led to the stadium finally being finished a few weeks later.

“There seemed to be no consequences for the contractor to finish on time or to give us the correct date,” he said. “The part that frustrated me the most is we were given seven or eight new dates.”

It was at the official celebratory opening that Mayor Fred Eisenberger made an offhand comment that, after the Games, he had “no doubt” lawsuits would be filed. While he wouldn’t elaborate on who would be filing them against whom, Tiger-Cats CEO Scott Mitchell says the team is considering suing to recoup millions lost as a result of the delays.

After Pan Am is over, the stadium will be leased to the Tiger-Cats in a 20-year deal. While the provincial and federal governments provided funds for its construction, the City of Hamilton (which contributed $54-million to the construction) is the owner.

“The stadium was delivered nearly a year late and that cost us six or seven games and those were a very significant impact to our bottom line; so, we’ll be looking at what remedies are available to us,” Mr. Mitchell said.

The lease agreement between the Tiger-Cats and the City states that the team is entitled to $1-million for every game missed as a result of the stadium being late. While only three games were missed, Mr. Mitchell points out that, last season, games were played in a “partial” stadium. Several sections had not yet been opened for many of the games, which meant the team missed out on potential ticket revenue.

Greg Stack, a vice-president of Kenaidan Contracting (one of the companies under the Ontario Sports Solutions umbrella) referred all questions about the missed deadlines to Infrastructure Ontario.

In a statement, Terence Foran, a spokesman for Infrastructure Ontario, said the provincial Crown corporation “shared everyone’s frustration and disappointment that Ontario Sports Solutions experienced delays in achieving substantial completion of the stadium.” He said Infrastructure Ontario would review what happened in the case of the stadium and “assess the lessons learned.”

When asked about potential lawsuits, Mr. Foran said he could not speculate on comments made by others.

Mr. Ferguson said he believes the nature of the contract between Infrastructure Ontario, which oversaw the project, and the design-build consortium Ontario Sports Solutions was to blame for the delays. Consequences, such as hefty fines for every day the project was late, would have pushed the contractor to do double- and triple-shifting to finish the project expediently, he says.

“We wouldn’t have got this stadium if it wasn’t for hosting the soccer for Pan Am Games … but, by gosh, they sure put a lot of stress on us.”