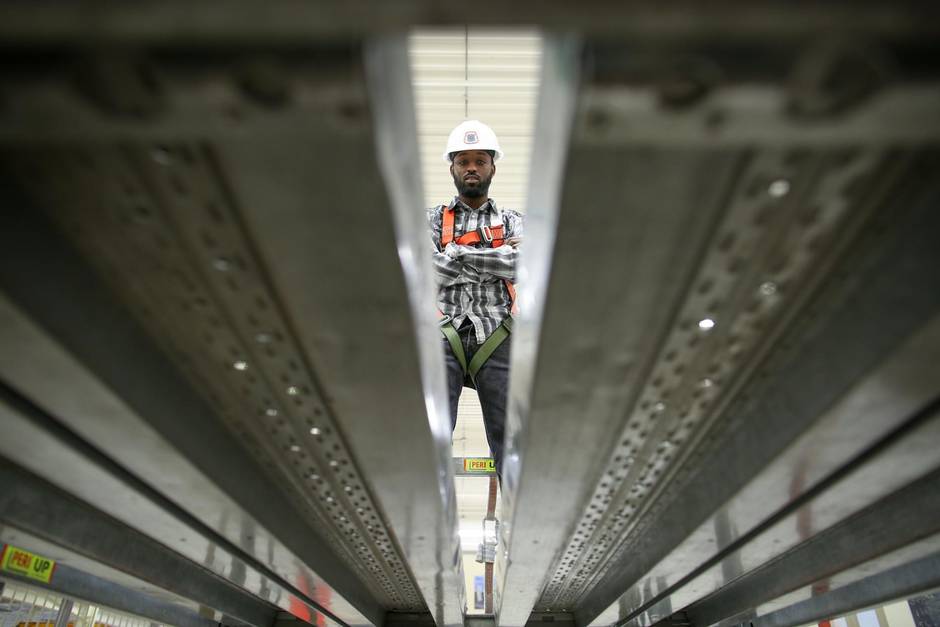 Ahmed Abbi, an apprentice with the Carpenters Union Local 27, is seen at their training centre in Vaughan, Ont., Wednesday, March 4, 2015. (Photos by Tim Fraser for The Globe and Mail)

On its face, that modest job may not seem noteworthy. But for Mr. Abbi – who was born in Somalia, grew up in a Kenyan refugee camp and came here 14 years ago – the five-day gig marked two firsts: As a novice carpenter’s apprentice, he was earning $18.50 an hour – “the most I ever got in Toronto,” he says. Mr. Abbi was also the first Somali-Canadian to work in the Carpenters Union Local 27.

His position, however, was also early evidence of a much more ambitious plan by Metrolinx and a network of labour and community groups to train people from high-needs neighbourhoods to work in construction, and then compel the contractors building mega-projects like the Eglinton Crosstown to hire them.

That strategy, known as a community benefits agreement (CBA), is also generating interest at City Hall. On Monday, the executive committee will consider a motion by Councillor Kristyn Wong-Tam to have city officials look at using CBAs on all large infrastructure and development projects as a means of creating better economic opportunities for low-income residents, and especially young people, like Mr. Abbi. Liberal Premier Kathleen Wynne publicly endorsed CBAs last year.

In theory, the idea of leveraging huge works contracts to produce social benefits seems appealing. But in practice, it’s hardly a straightforward proposition.

The objective is to make sure that the construction work force better reflects the diversity of the city of Toronto.
Steve Shallhorn, Toronto Community Benefits Network

The story of how Mr. Abbi connected with that carpentry training program traces to the aftermath of the gang-related Danzig Street shootings in 2012. At that time, a network of trade-union officials and community workers began to talk about getting unemployed youth into construction jobs on the city’s transit projects. Such opportunities, they reckoned, could counter the lure of crime in priority neighbourhoods, like Kingston Galloway.

“The objective is to make sure that the construction work force better reflects the diversity of the city of Toronto,” says organizer Steve Shallhorn, who is also executive director of the Labour Education Centre.

After two years of negotiations, that group, now known as the Toronto Community Benefits Network (TCBN), persuaded Metrolinx to formally require firms bidding for the $4-billion Eglinton Crosstown project, as well as the Sheppard and Finch LRTs, to hire in the city’s neediest areas. With a decade of work ahead, these transit mega-projects will yield hundreds of jobs.

The winning consortia will have to develop an “apprenticeship plan,” including “a focused program for youth-at-risk, historically disadvantaged groups in local communities including low-income, racialized and immigrant populations, and military veterans,” say RFP documents obtained by The Globe and Mail. The builders must target their recruitment efforts in communities affected by the transit construction and provide annual updates.

The tricky part, as Mr. Shallhorn acknowledges, is identifying the young people who’d benefit, training them and then persuading construction unions to take on minorities, women and newcomers – in short, individuals like Mr. Abbi, who traditionally have had little presence on work sites.

The social stakes are high: While CBAs have delivered thousands of stable construction jobs to minorities in U.S. cities, it remains to be seen whether the TCBN’s efforts will yield similar results here. 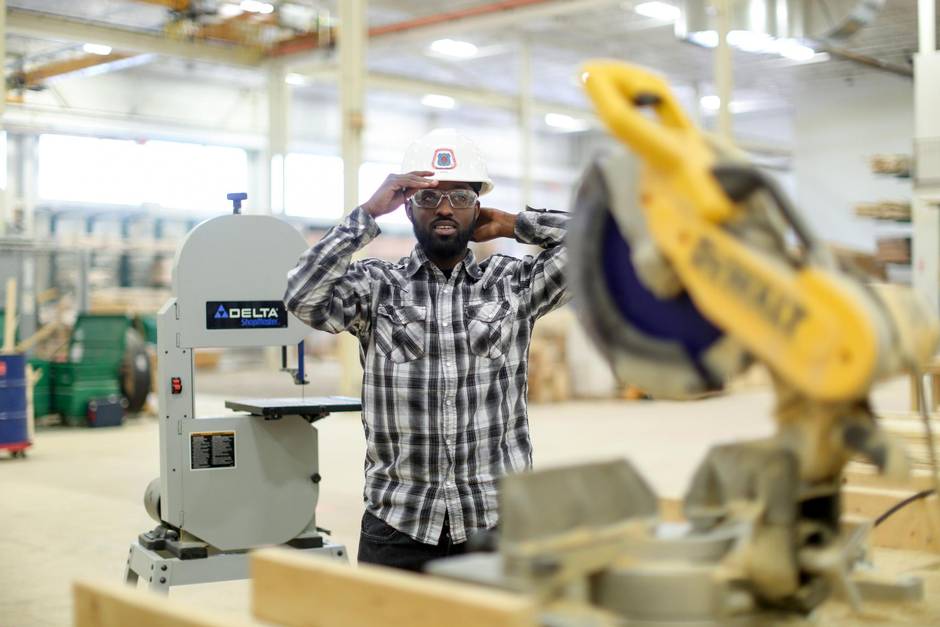 Like thousands of Somali-Canadians, Mr. Abbi has struggled to gain a foothold in Toronto’s labour force. Some turned to drug-dealing and gangs, while most subsist on a diet of low-wage jobs.

Though Mr. Abbi got into an international-relations program at the University of Toronto, he couldn’t stay in school because he had to support his family, both here and in Somalia. He cycled through menial jobs, then went to Fort McMurray. The money was good, but the work didn’t last. He came back last year.

“You’ve got to make ends meet,” muses Mr. Abbi, whose best job before the golf-club contract was a two-month, $14-an-hour stint as a telemarketer.

At the same time, TCBN members were searching for community organizers in four priority neighbourhoods, including Mt. Dennis-Weston. The search took them to Women for Change, a shoestring parenting organization on Jane Street.

TCBN hired Nasteeha Dirie, a volunteer for the group, and asked her to drum up prospective candidates. Ms. Dirie came from Somalia 23 years ago and studied accounting, but has spent her career in community work.

After asking women who drop by her agency if their husbands or sons needed work, she collected lots of names, among them Mr. Abbi’s.

The one thing we learned is that these people are hungry for work.
Nasteeha Dirie, TCBN

Last fall, TCBN invited them to information sessions. Ms. Dirie’s candidates were screened for education and credentials. They met with trade union reps, who explained how journeymen could earn $80,000 to $100,000 a year – many times more than someone working for $18.50 an hour. Drawing on provincial funding, TCBN arranged upgrading courses, training programs and apprenticeships.

Of the hundred who turned up to one session, almost none had registered with provincial agencies, meaning they didn’t even appear in local unemployment stats. They were, says Mr. Shallhorn, exactly the population TCBN wanted to reach: able-bodied individuals trapped in a cycle of marginal, temporary jobs.

Mr. Abbi attended another such session at a restaurant on Dixon Road. There, he met Chris Campbell, a business agent for the Carpenters who was helping TCBN. Impressed with Mr. Abbi, Mr. Campbell urged him to enroll in courses offered through the union’s Vaughan training centre and forge connections with other carpenters and contractors who can provide leads.

Mr. Campbell also gave Mr. Abbi advice. He’d been the only African-Canadian in his training class, and came in for racist taunting. (Mr. Abbi has faced harsh remarks about Somali pirates or Islamic extremism.) But, as he told Mr. Abbi, he also had mentors. Mr. Campbell is paying it forward. “Guys opened doors for me.”

Mr. Abbi has followed Mr. Campbell’s counsel: “You’ve got to network, and smile for everybody. You’ve got to push it better than anyone else because you already stand out.”

But TCBN organizers know that Mr. Abbi, and others like him, have to make ends meet while completing their training so they can have a shot at those Crosstown jobs. Since the golf club gig ended, Mr. Abbi has taken on two other short-term carpentry/construction gigs, including one he got through connections he’d made while on the job.

Ms. Dirie says the city and the province should provide support by offering recruits from low-income areas with Metropasses or short-term assistance during their training. “The one thing we learned is that these people are hungry for work.” 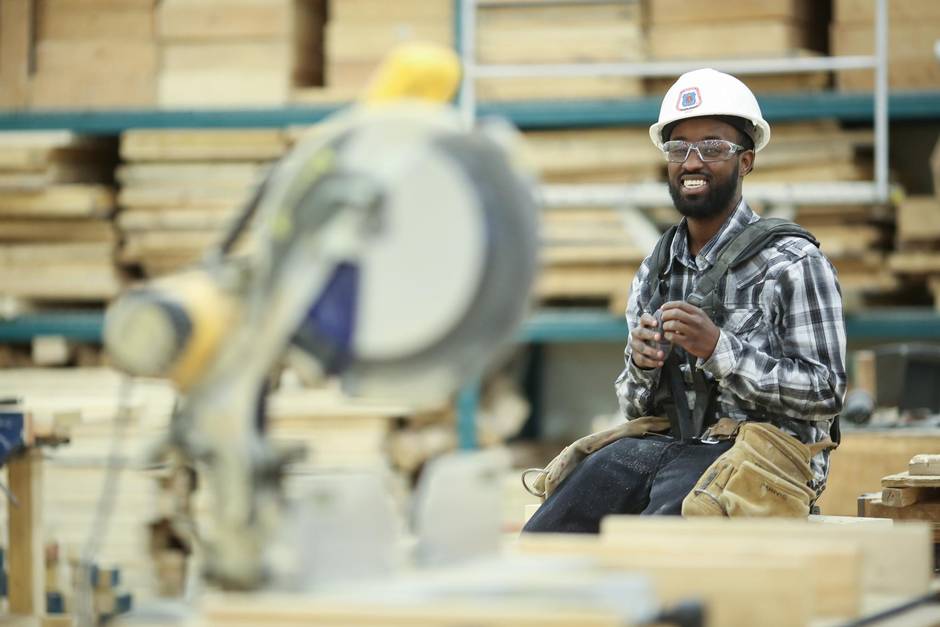 In Toronto, the only major project to date that involved a CBA was the Regent Park redevelopment. Toronto Community Housing Corp. made local hiring a requirement, resulting in 600 jobs for area residents. Ms. Wong-Tam says the tactic has huge potential and cites multibillion-dollar projects in cities like Los Angeles and San Francisco that involved CBAs and generated thousands of jobs for residents of economically deprived communities.

Mr. Abbi, who stays in touch with Mr. Campbell, is “really appreciative” as he continues his apprenticeships and waits for the real Metrolinx construction jobs to start rolling out. “I’m lucky because I found this guy,” he says of Mr. Campbell. “Basically, I’m just hoping for the best. I have my fingers crossed that it works out.”