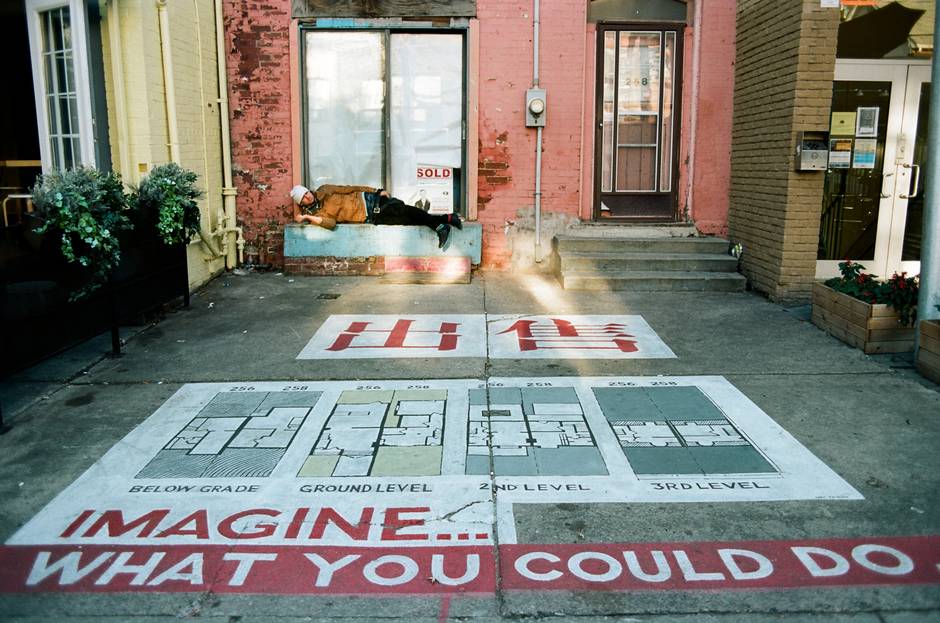 A man lies on the sill of a sold building in Kensington Market. The neighbourhood’s dynamic is being threatened by development projects. (Julien Gignac for The Globe and Mail)

On a sunny recent weekday afternoon, a woman walked with her pet pigeon through Bellevue Square. To her left, a man played chinlone – a traditional Myanmar game – as lo-fi tunes emanated from a radio strapped to a vintage bicycle. Across the park on a shaded patio, people lounged on their lunch breaks, clinking drinks.

Kensington Market is a hub of eccentricity in the heart of downtown Toronto with a deeply rooted sense of multiculturalism and celebrated unconventionality. But the identity it’s famous for may be endangered. At the northern end of Augusta Avenue, trendy independent shops draw clientele to buy French cookware and macaron-making kits, a stark contrast to the endearing grit found elsewhere in the market.

The University of Toronto wants to formally understand the neighbourhood’s dynamic. That’s why the university’s ethnography lab is busy conducting a multiyear research project to document the Market’s rich history and changes caused by urban encroachment.

A man walks down Kensington Avenue after purchasing some produce from Kensington Fruit Market. (Julien Gignac for The Globe and Mail)

The area is so unique that researchers have committed to studying it as they would some faraway, exotic locale – the first time the lab has focused on an urban neighbourhood.

“It’s hard to find a more interesting place to study, both in terms of its real life socio-economic dynamics and processes of gentrification that are ongoing there,” said Dr. Joshua Barker, director of the Kensington Market project and associate professor of anthropology at the university. He mentioned the “pressure” of development projects happening at each and every threshold of the neighbourhood, such as a new community housing complex that’s due to sprout up on the neighbourhood’s south border of Dundas Street, or a chain retail building in the works on Bathurst Street, to the west.

Many locals refer to the market as a small town situated within a big city. From landlords to residents, most agree that change is inevitable, though they are resolute in terms of what makes the market so special: its eclecticism.

As history shows, the market has always been a place of transience. Jewish and Italian immigrants used to call it home in the early 20th century; the next group of people came from Portugal. And the trend continued.

If there’s one person who knows the lay of land of Kensington, it would be Cece Scriver, 43, a market native and long-time resident who feels perfectly at home in her “weird little island.” She co-owns Courage My Love, a vintage clothing shop on Kensington Avenue that’s been in business since 1975. Ms. Scriver was born in the market after her mother theorized it would be the next “cool” place to live and work. The family jointly owns five properties. 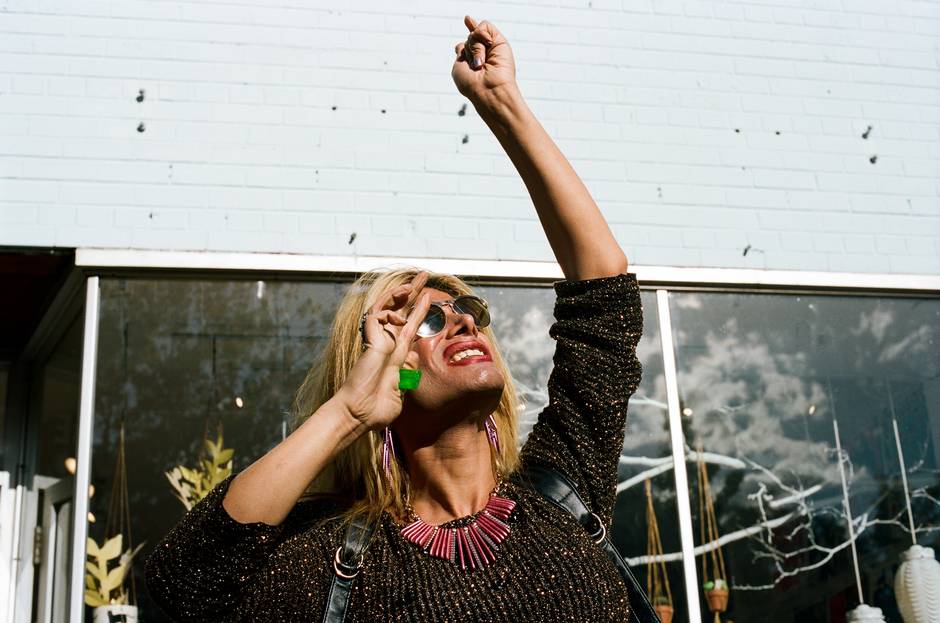 Kensington Market has always been an eclectic neighbourhood. (Julien Gignac for The Globe and Mail)

While Ms. Scriver conceded the market was being altered, she said the change of today is no different from the kind in bygone eras – even Courage My Love made a difference in the neighbourhood, she said. “We were the first vintage clothing store to open here.”

Now, of course, there is a surplus of shops selling old leather cowboy boots, buffalo nickels and slim cut blazers circa 1970.

“I thought there was gentrification in the seventies. If you’re on the inside, it’s not really gentrification: it’s just the evolution of the market. Nothing’s really changing,” she said. “It’s just moving forward. The market is a beautiful place because it’s a place where people can start out and it will always be that way.”

But she did draw a line in the sand. Kensington Market, she said, is a space where big business has no place – and never will.

In 2014, real estate company RioCan’s proposal to allot space for a Wal-Mart was thwarted by an upswelling of neighbourhood opposition. 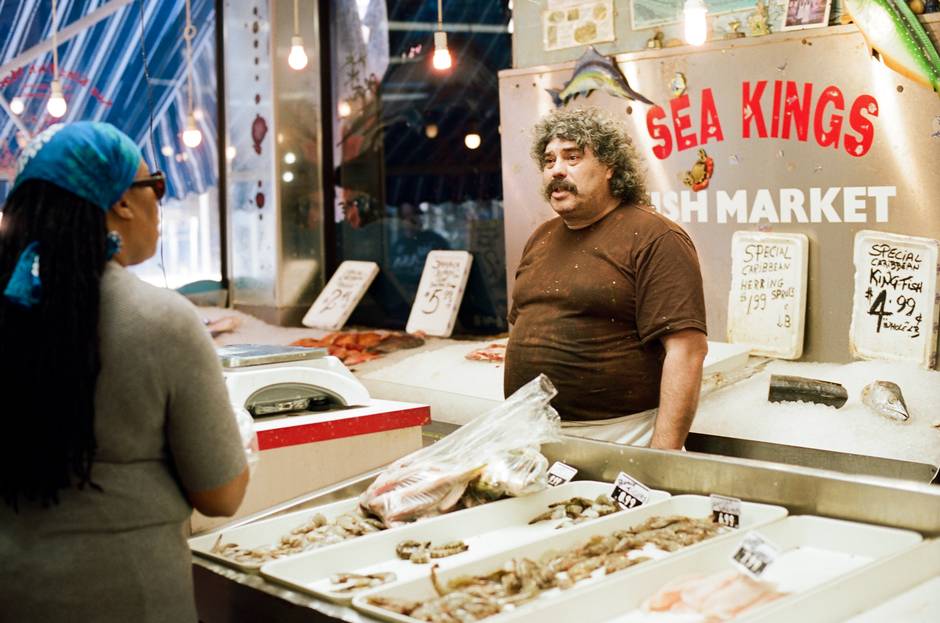 A patron of Sea Kings Fish Shop bargains with a shopkeep. (Julien Gignac for The Globe and Mail)

Ms. Scriver remembered an H&M advertising agent who asked to slap a billboard on the flank of one of the six buildings her family owns in the market.

“I said ‘Get … out of here,’” she said. “It’s cheesy, out of fashion and lame. The market’s not lame. Everybody that’s here has the same mind that we’re against losers who don’t know what the market’s about.

“It’s fun, weird, freaky, crappy and stinky. That’s sort of what keeps the market that way it is. We need the dirty to combat the clean. We need the homeless guys and the crackheads in the park. We need all of it to make it work because it’s all one big yin-yang. There’s something to be said about living in a small town in a big city. This is a small town. When you walk up the street, everyone knows you.”

Like most ethnography studies, researchers are afield gleaning information from the locals like Ms. Scriver: “Talking to and learning about where people have come from, how they got their business started, what their families are doing,” Dr. Barker said.

The project is for undergraduate and doctorate students – and potentially high school students – wanting to whet their ethnography skills in a local setting. 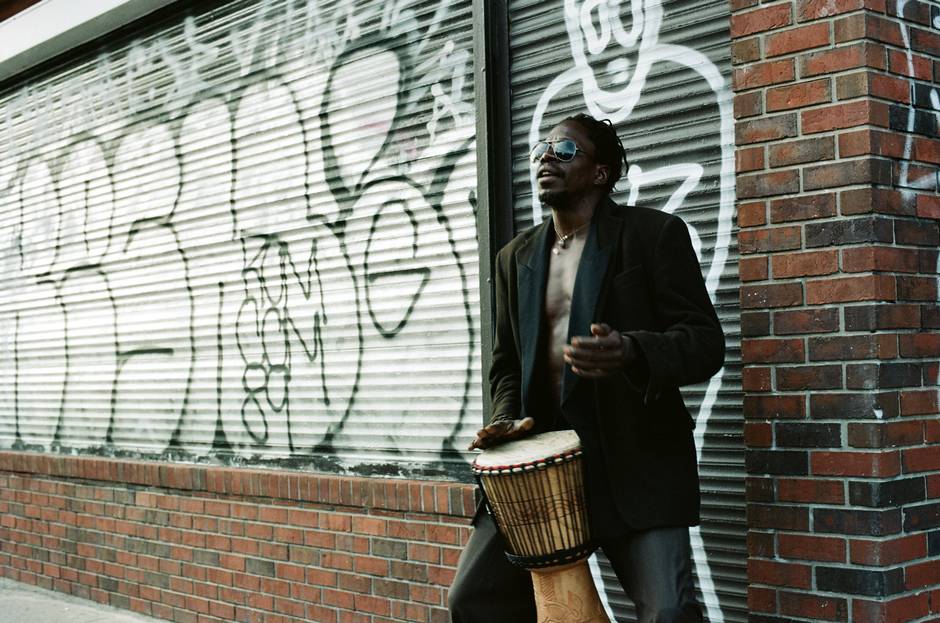 A man beats a drum along Baldwin St. in Kensington Market on Oct. 5. (Julien Gignac for The Globe and Mail)

Not only will they be conducting interviews to study the essence of the neighbourhood, but taking photographs and video, jotting down observations and unearthing ephemera such as the Kensington Market Drum, an old school community paper from the 1990s.

Over the course of several years, researchers will have an eye on the community, gauging ways of life, attitudes and – most importantly – change.

Anthony Aarts is a landlord who has lived and owned multiple residential properties in the market since 1999. As he tinkered with a new doorknob on the stoop of one of his properties, he mused about its character. “Societies changed. People shop different than they did five years ago.”

One of the main drivers of change in Kensington, he said, was when Sanagan’s Meat Locker took over European Quality Meats and Sausages after it shuttered about four years ago. This development introduced a new clientele to the market.

“When they [European Meats] moved out of the neighbourhood, so did all of their traditional Portuguese shoppers. It snowballed. It was this that inspired a lot of the change you see in the market today.” 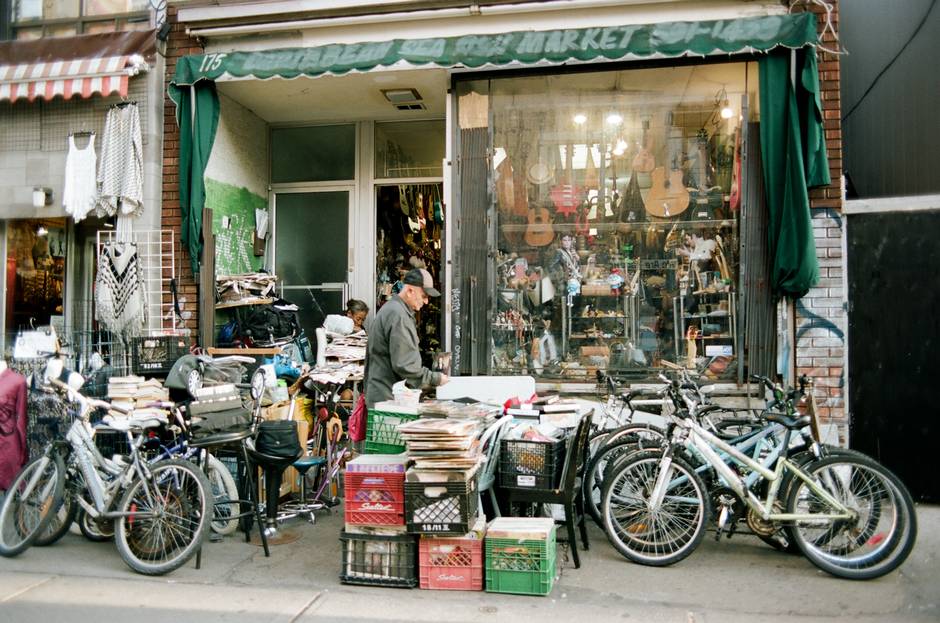 The pressures of gentrification are indeed felt by most shopkeepers in the neighbourhood. (Julien Gignac for The Globe and Mail)

The pressures of gentrification are indeed felt by most shopkeepers in the neighbourhood. Roger DeSouza, 60, has owned vintage clothier businesses in the market for 20 years and has seen the social fabric shift in a place he “fell in love with.”

“Change in the last three, four years has been very speedy quick,” said Mr. DeSouza, who owns Flashback, Flashback 2 and King of Kensington. “I think change is unavoidable. I do what I do. I’m a very simple guy who does what I can to keep it the way it was.”

Located on Augusta Avenue is a small grocery store called Fairland. Signs set up outside revealed that it is slated to close. Owner Martin Zimmerman sat at a till inside, eating peanuts. Due to health complications, he said, he is liquidating and renting the shop he’s owned and operated for 30 years. What will come of the space will depend on the type of business applications he receives. Mr. Zimmerman said he will be very judicious when selecting an owner to rent to – and with reason.

“My name and reputation still mean a lot to me,” he said. “Everybody knows what boundaries can or can’t be crossed. You have to look around to see what’s already here. It all has to be very trendy. It’s all about personality … and people want to keep it that way.” 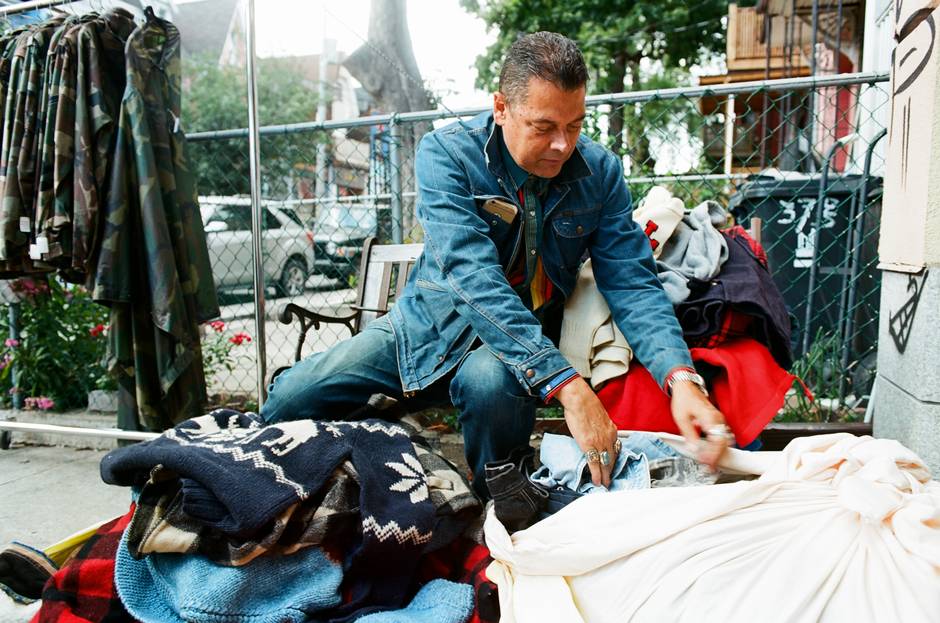 Roger Desouza, owner of three vintage clothing stores in Kensington Market, sorts through a collection of sweaters and jackets. (Julien Gignac for The Globe and Mail)

Sole Survivor is a shoe repair shop located in a small basement space on Kensington Avenue. Owner Lorena Agolli, 32, has noticed marked differences in the neighbourhood, and she’s only been in the area for three years.

“I still get the locals, but now I’m getting the people that are reading in Now magazine about the next … bar that’s hip and trendy and then they find us,” she said.

Ms. Agolli said people with money are moving into old buildings and revamping them, which increases the value of the market and causes other shops to “struggle,” she said. “I try not to fight it. I’m trying to go with the swing of things, but at the same time, if my landlady was to see the money grab in all of this and raise my rent for a small basement, I don’t think I could be here, which would be a shame because Kensington made my business.”

Down the street is El Rey, a mezcal bar that opened in May. Millennials sat on the patio, tucked between tropical plants, eating ceviche and drinking $12 cocktails.

Owner Owen Walker said there was much deliberation about the bar’s flair and how it would “fit in” prior to its unveiling. 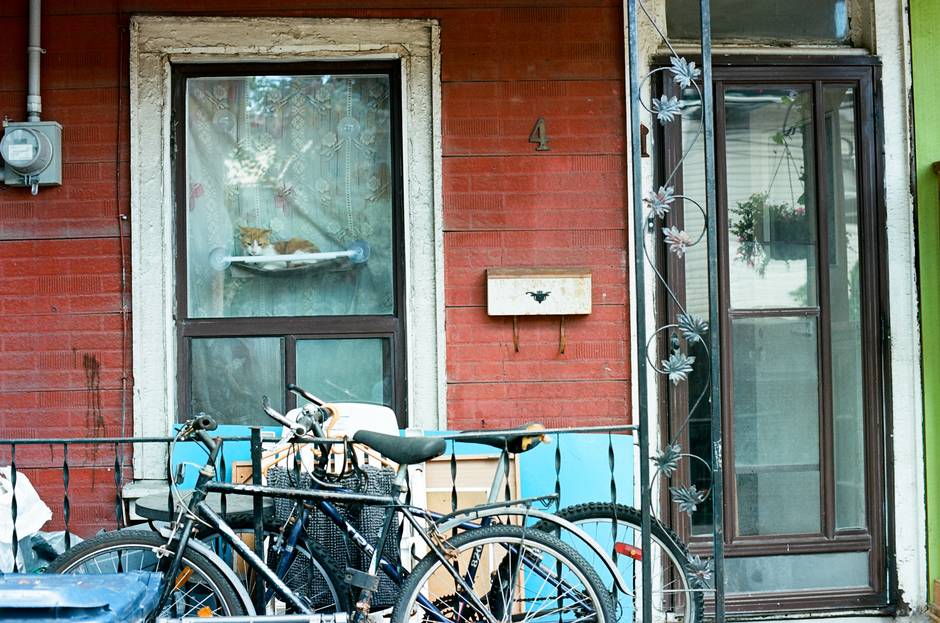 A cat wakes from a nap in a house located on Kensington Place on Sept. 27. (Julien Gignac for The Globe and Mail)

He said such planning and sensitivity was required, lest some of locals had a bone to pick with his venture. So far, the market has been receptive and welcoming, he said.

“It had to make sense,” he said. “The issues associated with gentrification of the market are not unspoken. It’s very clear that this community wants to retain its identity. That identity might be fluid, but there is definitely a fierce understanding with people here that there’s something special and unique, and that uniqueness needs to stay. I respect that.”

He wanted to open in Kensington because he was inspired by the market’s sheer energy and dynamics. “Kensington is essentially the backyard of Toronto. You get all colour, caste and creed.”

Gentrification isn’t isolated to Kensington Market, and the research can be used as baseline to study the phenomenon more broadly, said Emily Hertzman, researcher and co-ordinator of the study and PhD candidate at the university.

“[Gentrification] is a condition of modern, urban life,” she said. “I’m more interested in what we can learn about how the processes are playing out in the Market. We can learn from that. That will help us [as a society] understand the broader processes that affect our lives.”