It sounds like a tenant's utopia: This month, B.C.-based developer Westbank unveiled its proposal for the southwest corner of Bloor and Bathurst, currently the site of Honest Ed's. Instead of the teeny-tiny condominiums that many had feared, president Ian Gillespie put forth an ambitious complex of 1,000 units. At least half will be two-bedrooms or larger, and every single one of them will be rental.

"We want the project to be as complete as possible, a neighbourhood for big families and little families and middle and high-income and students and seniors and everything in between," Gillespie says. Westbank is promising 57 live-work spaces for artists, plus an all-season public market.

The proposal caused immediate buzz, not least because purpose-built rental in Toronto has been all but stagnant for decades. Since the mid-1990s, provincial policies have openly encouraged builders to focus on private condos, and since 2009, only 830 new purpose-built rental units have gone on the market.

But now, a rental renaissance seems to be under way. As the economy shakes and the condo bubble deflates, institutional investors are increasingly embracing the slow but steady profit of property management over the riskier highs and lows of retail sales. In a related twist, a few planned private buildings have recently converted into rentals, including the Kingsclub complex near Liberty Village and The Selby project on Sherbourne Street.

The rental sector is desperate for square footage – the Canadian Mortgage and Housing Corporation puts Toronto's vacancy rate at 1.6 per cent – so every unit is welcome. Yet even as 32,726 new condos have gone on the rental market in the past half-decade, tenants continue to struggle with affordability, unit size and family-friendliness, plus trickier issues such as security of tenure and landlord-tenant relationships. Once the first rush of gladness about new space wears off, many landlords, tenants and market watchers are left frustrated at a piecemeal approach that isn't necessarily filling the gaps that exist.

Rental properties, when they are built to meet all of a prospective tenant's needs, attract a range of incomes and living circumstances that elevate the diversity of a neighbourhood. "I think the enlightened development community that get it, they see integration as an important public benefit," says Sean Gadon. As director of the City of Toronto's Affordable Housing Office, his job often requires much liaising between other public agencies and developers to find innovative means of adding affordable housing to new construction. With the current state of the rental market, Mr. Gadon has seen that "key workers in the economy are squeezed out of access to housing."

Private developers have 12 tower projects designed specifically for rental currently under way, but most of them are clustered along the city's wealthy north-south axis. A few carefully negotiated city-led partnerships between developers and non-profit organizations are bearing fruit, but not nearly as much as is needed.

Gillespie, whose company has almost 4,000 new rental units under way across Canada, knows that his brand-new complex in an upper-middle-class neighbourhood won't be accessible to all. He believes the Honest Ed's project will add to "the housing continuum," saying that as new buildings go up, "older housing becomes more affordable."

Geordie Dent, executive director of the Federation of Metro Tenant Associations doesn't agree the trickle-down effect will materialize. He points out that despite all of the new individual condo rentals that have come online, the FMTA still gets thousands of calls a year from people who can't find affordable places to live.

"Targeting the higher-end renter hasn't helped free up the lower end," says Dent, who represents an umbrella group of 3,000 tenant associations across the city. "Demand is so outstripping supply."

Most one-off condo rentals were built after the Ontario government eliminated rent control on new buildings in the late 1990s, meaning big price jumps from one year to a next are effectively what Dent calls "economic evictions."

Even those who can afford new buildings they are often unsatisfied with spaces designed to maximize investment profit, not livability. In January, Tyler Greenleaf began looking for a new apartment for him, his wife and their two toddlers.

"I wish developers would spend one day living the life of a family," says Greenleaf, 34. "We saw one that was 1,500 square feet but had only one closet." Another unit billed as three bedrooms was barely 750 square feet.

The 1,400-square-foot condo unit on Bay Street that they live in now is terrific, but the surrounding area doesn't have enough green space for little kids without backyard access. Both Greenleaf and his wife work at the University of Toronto, and their income allows them to pay up to $2,500 in rent. It wasn't money that was the problem, but design. "We just want 1,000 to 1,200 square feet of adequate space," he says.

Ironically, the flood of units isn't helping those on the other side of the condo rental continuum, either. Property manager Rachelle Berube says that oversupply in the downtown market is pushing many new condo rents below what owners need to break even.

Berube is the owner of Landlord Rescue and has been a property manager in Toronto for 20 years. She's overseen everything from apartment towers at Jane Street and Wilson Avenue to individual units in boutique Yorkville condos.

In mid-March, she published a blog post challenging the CMHC's 1.6-per-cent vacancy rate, calculating her own portfolio at about 3.2 per cent. "I have a listing at Ice at 12 York St.," she says. The rent is $1,675 a month. "I've had zero phone calls. There are 28 available apartments there listed on MLS. And how many on Kijiji, who knows?"

She saw one post from an apartment hunter on the classified-ads site seeking a one-bedroom in Ice. The problem is, he refused to pay more than $1,350 a month, well below what her client needs to pay the mortgage and maintenance fees.

For tenants on tighter budgets, finding spaces that are both affordable and simply decent can be a challenge. Single mom Hollie Pollard currently lives in a one-bedroom basement apartment in the Junction with her 17-year-old daughter. Finding a space she could afford – for her budget, a one-bedroom maxes out at $1,500 a month – was just part of what made her last apartment search tricky three years ago.

"Someplace that's clean, actually has a rental contract, no code violations and a lease that follows the law – very rarely did I find them," says Pollard, a self-employed social-media community manager. She's rented most of her adult life, in high-rises and private homes across Canada. Landlords who refuse to give receipts, or won't do proper repairs, have always been a problem.

Dent of the FMTA says that uneducated landlords are another problem exacerbated by individual landlords cashing in on the condo rental boom – his organization has lobbied for years for mandatory training for small landlords, but so far the issue hasn't gained any political traction.

Pollard's current landlord is communicative and timely with repairs, but landing the place came down almost to luck. "They showed the apartment to 24 people, and the wife of the landlord liked me the most as a person," Pollard says. When her daughter graduates high school, the two of them might move to the suburbs, where rents are often cheaper.

Keeping lower-income workers closer to the core is one goal of the Affordable Housing Office. "We want housing in all neighbourhoods, not only the inner suburbs," Mr. Gadon, the director, says. He's helped scatter small clusters of rental units throughout new condos in the downtown core by facilitating partnerships between private developers and non-profits. The official term for this is "inclusionary zoning," and while there are political barriers to implementing it widely, a few small test projects are promising.

The spaces are aimed at specific populations: When Bisha, a 44-storey boutique hotel and condo, opens south of King Street West in 2016, it will contain seven rental units reserved for hospitality workers. The units aren't subsidized, or geared to income, the way that properties managed by the Toronto Community Housing Corporation are. They'll be renting at 80 per cent of what the CMHC says is an average rent for the area.

It would take serious government initiative, though, to implement solutions such as this on a mass scale. After years of negotiation, the number of inclusionary rentals the office has gotten approved to date is just 49.

As for Greenleaf and his family, they did find a great spot after three and a half months of searching. In May, the family is moving to one of eight units in an old, character-laden house in the Annex – the type of space many property managers say is most in demand. Rent will be $2,300 a month, including utilities. "I wouldn't call it our dream apartment," Greenleaf says. "But it is just what we need for this phase of life."

With files from Tamsin McMahon and Guy Dixon

This townhouse complex has been an awful long time in the making. In 2012, the original plan to build a new 575-unit, three-tower community was scaled back to renovating the existing townhouses, which have yet to be finished.

The historic Postal Station K will stay intact at the base of the 27-storey tower – restored and updated to include a geothermal heating and cooling system.

Number of rentals: 154, with 106 of them reserved for seniors and people with disabilities. The tenanted portion of the complex will open this year, with rent set at 80 per cent of the city's average.

Builder and property manager Medallion received $16.2-million in government incentives for the rental building, which opens this year. The entire mixed-use complex will include two more residential towers, and retail.

Toronto’s housing-price boom is a sign the city is thriving
March 4, 2015 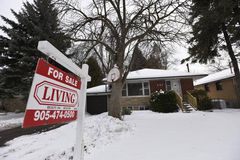 Stollery’s is going. But Toronto should do more to save its heritage
January 23, 2015 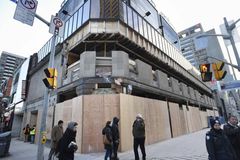