When Bernard Trottier agreed to go head-to-head with Michael Ignatieff as the Tory candidate in his west-end Toronto riding, some party faithful had a name for him - sacrificial lamb.

Tuesday, as the newly elected Conservative member for Etobicoke-Lakeshore nursed a cup of black coffee, he struggled to contain a smile, describing how he proved them wrong and struck a fatal blow to Mr. Ignatieff's run as Liberal Leader.

"I told my team from the beginning this was not an impossible task," said the 46-year-old first-time candidate, who took a leave from his job as a business consultant with IBM to run for office. To those "smug insiders" who figured he didn't have a chance he had another message. "I looked them in the eye and said we are doing this to win. You have to be able to visualize success from the outset."

Of course, the rookie candidate had some help from a wave of Conservative support that swept across the Toronto area and brought an end to the Liberals' hold on the city. Etobicoke-Lakeshore was not singled out by Tory strategists as a key GTA battleground, but it is the home turf of some party heavy-hitters, including Stephen Harper's former chief of staff, Guy Giorno, and former Conservative candidate John Capobianco, both of whom helped Mr. Trottier on the campaign trail.

And another Etobicoke political powerhouse - Toronto Mayor Rob Ford - added his clout to the push to topple Mr. Ignatieff, blanketing the riding with automated phone messages urging voters to give Mr. Trottier their support.

Mr. Trottier, a civil engineer with an MBA from the University of Western Ontario, switches easily between English and French and says he learned his way around Parliament Hill during a year as a student at the University of Ottawa. While he had yet to talk to the Prime Minister by lunchtime Tuesday - Laureen Harper called to congratulate him election night - he said his victory and that of other Tories in Toronto will give the country's largest city a badly needed voice.

"It is important for us to have people from Toronto at the caucus table for a change," he told supporters on election night. Representation from Toronto in cabinet also is needed, he said, but declined to speculate on his chances.

Mr. Trottier grew up in St. Paul, Alta., northeast of Edmonton - a small French settlement that in 1967 became the home of the world's first UFO landing pad - but has lived in Toronto for close to two decades. He moved to the riding 10 years ago, and lives there with his wife, Susan Schutta, daughter Zoe, 9, and son Alexandre, 11. Both children go to the local French-language Catholic school.

As the new voice in Parliament for Etobicoke-Lakeshore, a riding the includes the Tudor mansions of the Kingsway and the gritty streets near the Lakeshore, Mr. Trottier plans to work with the city to improve infrastructure and transportation, as well as address the "blight" of prostitution and organized crime that plagues some areas in his riding.

In the race that 18 months ago some in his party - and even his wife - doubted he could win, Mr. Trottier claimed a comfortable victory. He figures some of the credit goes to the Liberal Leader himself, who lives outside the area and was busy fighting for votes across the country, rather than pounding the pavement in his own riding. With the decline of Liberal fortunes in the final weeks of the campaign, Mr. Trottier said, many voters expressed concern about a possible by-election if Mr. Ignatieff was forced to give up the party leadership and chose to leave politics.

"Either way they voted, they figured they would have a different MP by 2012," he said.

Ignatieff resigns after Liberal defeat
May 3, 2011 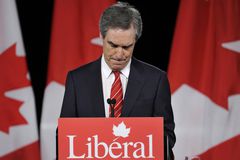 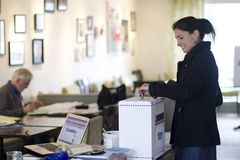