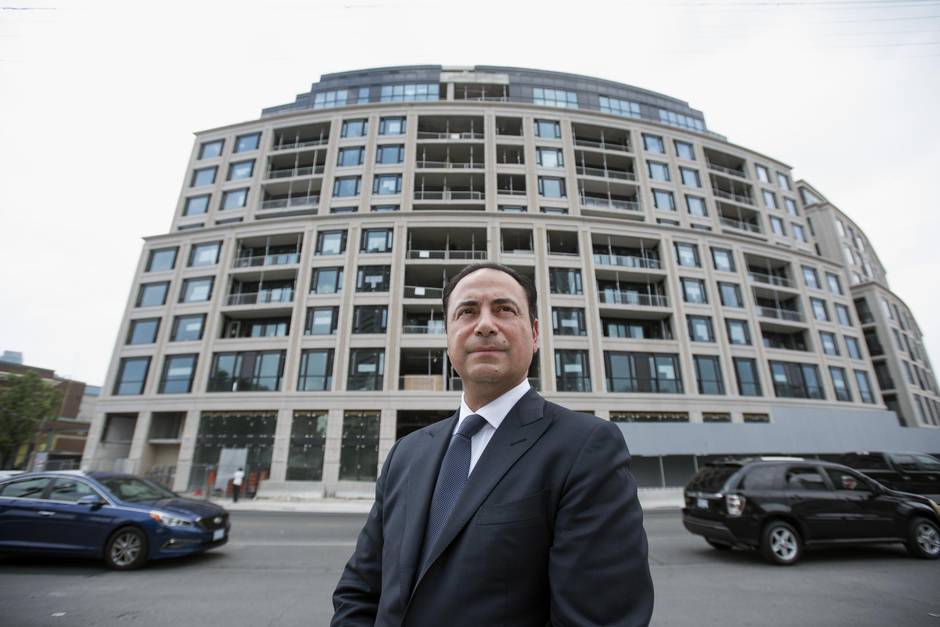 Developer Sam Mizrahi is photographed near two of his condominiums on Thursday. A former business partner is suing Mr. Mizhari to get their share of the profits of developments at 133 Hazelton Lanes and 181 Davenport Rd. (Fred Lum/The Globe and Mail)

Five years ago, Sam Mizrahi, one of Toronto’s most ambitious real estate developers, found himself in a basement in the city’s Bridle Path neighbourhood. It was there, he says, he began to fear for his safety.

In a span of just a few hours, one of the main financial backers of two of his luxury condominium projects, Mahmoud Khavari, had become one of Iran’s most wanted men, having left his position as the chairman of the country’s largest bank and fled to Canada amid a corruption scandal.

With Iran demanding Mr. Khavari’s immediate return, Mr. Mizrahi feared being caught in the crossfire of a potentially violent international dispute as they debated the future of their business partnership inside the former banker’s Toronto home.

The agreement worked out in that basement in the hours that followed the frantic flight to Canada has become the subject of a multimillion-dollar lawsuit before the Ontario Superior Court, and led to a feud between Mr. Mizrahi and the Khavari family of near-Shakespearian proportion, involving alleged death threats, international intrigue and some of the city’s hottest real estate.

The Khavaris, who dispute the threats of violence, are seeking at least $35-million in damages from their former business partner, arguing that they were denied a stake in two Yorkville properties in which they invested money, along with three others that include the massive, 80-storey One Bloor tower, the crown jewel of Mr. Mizrahi’s condominium empire.

Mr. Mizrahi has fought back, launching his own $51-million countersuit, levelling a slew of accusations against the family, including intimidation and breach of contract. He denies the Khavaris were involved in any other properties and argues they were only entitled to half of the profits from the two projects.

As the dispute wends its way through court, Iranian authorities continue to pursue Mr. Khavari, who they allege helped embezzle $2.6-billion (U.S.) from the country. The regime appears willing to go to extraordinary lengths to bring him back, according to court documents and government sources.

Formally, Canada has refused Iran’s request for help. A spokesperson for the Department of Justice said Canada does not have a bilateral extradition treaty with Iran. Mr. Khavari, who became a Canadian citizen in 2005, also faces the threat of death if returned. One of his alleged conspirators, Mahafarid Khosravi, was hanged in connection with the scheme in 2014.

Mr. Mizrahi, in his sworn statement, says the Khavari family and CSIS officials informed him in 2011 that the Iranian government was sending a “special force” to Toronto with the aim of spiriting the former banker back to Tehran.

Iranian officials have also reportedly raised his name in discussions related to Saren Azer, an Iranian-Canadian doctor who is accused of abducting his four children and fleeing to Iran. In May, two former federal officials working on the file told the Globe that Mr. Khavari had been mentioned in back channels with Iranian officials, suggesting there’s a deal to be made. 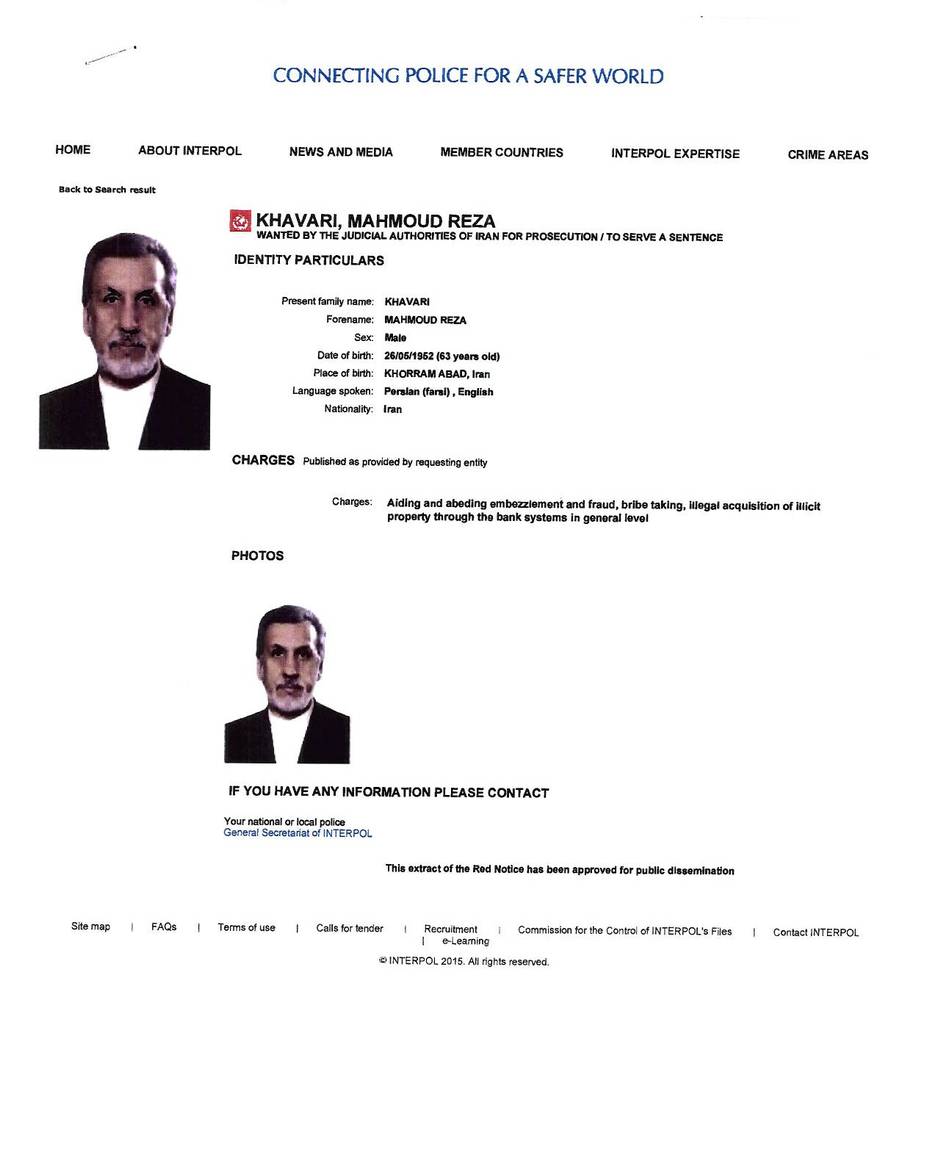 Interpol issued a warrant for Mahmoud Reza Khavari, who is alleged by Iranian authorities to have helped embezzle $2.6-billion (U.S.) from the country. The warrant has since been withdrawn.

All the while, Mr. Khavari has remained in Toronto, living in North York, as his family expands its real estate holdings across the city.

At Mr. Mizrahi’s office in Toronto, which stands just a stone’s throw away from the two properties he built with the Khavaris, the businessman painted himself as the victim of an elaborate extortion scheme, orchestrated by a family he says claimed to possess untold wealth and limitless reach.

“If you get threatened that someone is going to kill you and your family and slander your name and make it so you can’t do business ever again when you’ve done nothing wrong in that respect, I was scared,” says Mr. Mizrahi, echoing his legal claims. “I was very scared at the time."

Mr. Mizrahi, who moved to Canada from Iran in his youth, before the Iranian revolution, first made a name for himself as the charismatic owner of a chain of high-end dry-cleaning shops called Dove Cleaners. While he has been in the real-estate business for the past 20 years, it was not until 2007 that he began to focus exclusively on luxury real estate. Most of the condos he built are now clustered around Yorkville.

As a developer whose brand caters almost exclusively to the needs of the city’s ultra-wealthy, Mr. Mizrahi looks the part. Wearing a gold Rolex and a tailored suit, he brims with confidence as he walks on Hazelton Avenue; his clients, many of whom live close to his office, greet him enthusiastically as he passes by.

He first met the Khavaris around 2008 when his company was hired by the family to design custom homes. He began mentoring Mr. Khavari’s two sons, Khashayar (Khash for short) and Ardavan, who were both in their twenties and had an interest in real-estate development. It was a mutually beneficial relationship, according to court documents: Mr. Mizrahi had the expertise and the Khavari family had money to invest.

Both sides agree the initial arrangement saw the sides enter into a 50-50 partnership to develop two high-end Yorkville condo projects on Davenport and Hazelton.

“Khash, with the assistance of his family and his father in particular, advanced approximately $14.2 million,” reads a court filed affidavit from Mr. Mizrahi.

The Khavari family had also committed to funding the project in full, saving Mr. Mizrahi from having to seek bank loans to pay for construction. But the partnership quickly changed in 2011, when The Globe and Mail and other media reported that the Khavari patriarch had moved to Canada from Iran as a fugitive.

“Following these media reports Khash advised me that Toronto-Dominion bank froze all of the accounts and assets owned by the Khavari family, and that he and his family no longer had funds to invest in the development,” the Mizrahi affidavit says.

With a spotlight on Mr. Khavari and the project’s funding in trouble, the two sides were forced to work out a new deal. In the basement of the Bridle Path home, surrounded by lawyers and security guards, Mr. Mizrahi says he proposed to sell the two properties and end his relationship with the former banker. But Mr. Khavari rebuffed his offer and convinced him to leverage his influence as an experienced businessman to see the venture through, according to Mr. Mizrahi’s sworn statement.

“I was under a significant amount of stress at the time,” his affidavit reads. “I was frightened about my own safety and the consequences to me personally if I refused the [agreement] in its current form.”

In the new deal, Khash signed a trust agreement that essentially gave Mr. Mizrahi full control of the projects so long as he split the eventual profits with the Khavari family.

Mr. Mizrahi says his decision that day would later come to haunt him.

With the Khavari family name off the project, Mr. Mizrahi was able to secure $88-million in funding to push the condos forward, but he would have to pay high rates of interest.

In the years that followed, he says he had very little contact with the family. The Khavari brothers, however, say they remained involved in Mr. Mizrahi’s business and contributed on numerous other projects. 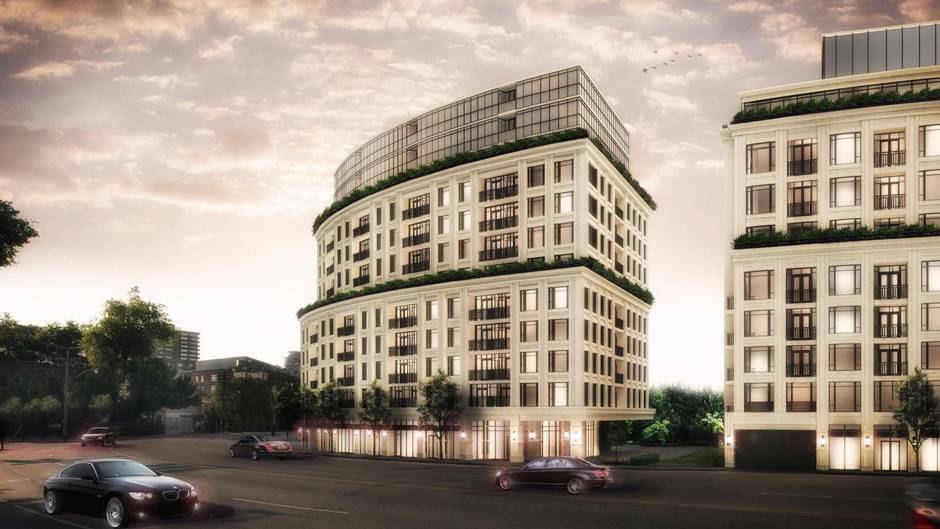 181 Davenport, one of Mr. Mizrahi’s properties.

As the Hazelton and Davenport properties neared completion, tensions began to escalate. In April of last year, Mr. Mizrahi said Mr. Khavari fabricated a story in which Ardavan was experiencing financial difficulties in Dubai. The then-28-year-old would face a “grave physical danger” unless Mr. Mizrahi provided the family with $14-million from the sale of units from the Hazelton project, according to the court documents. At the time, Mr. Mizrahi said none of the money from the developments would be distributed until the two properties were finished.

Mr. Mizrahi said in his filings that Mr. Khavari then threatened to “destroy [his] reputation” if he refused to help, allegedly giving him one hour to provide payment or “suffer the consequences.”

Fearful about the gravity of the threats, Mr. Mizrahi claims he eventually agreed to write a $7-million cheque to the family.

In their legal filings, the Khavari family denies the death threats. In a statement responding to questions sent to the family lawyer, Khash said the allegations against his father were a “[distraction] from the real issues in the lawsuit” and reiterated the claim that he was entitled to a 50 per cent stake in One Bloor because of his involvement that “spanned from contribution of funds to design, architectural and engineering coordination.”

He alleges in court documents that Mr. Mizrahi has repeatedly endangered his family’s safety by mentioning his father’s alleged criminal past.

“Given Mahmoud’s previous career in the Iranian banking system, there are religious and political extremists that wish to harm Mahmoud and his family,” Khash said in court filings. “Sam knows this. Sam has included these irrelevant allegations for the collateral and improper purpose of placing Mahmoud and his family in physical jeopardy.”

They have also accused him of misusing the money earmarked for the Hazelton and Davenport properties. They point to an audit of Mr. Mizrahi’s businesses prepared by PricewaterhouseCoopers which states that Mr. Mizrahi spent $3.5-million of Mr. Khavari’s money to buy a private jet and pay for his daughter’s education. Mr. Mizrahi and his lawyers have vigorously denied that allegation, arguing that the PricewaterhouseCoopers auditor had been misled and had reviewed the wrong documents, pointing to statements made during cross examination in which the auditor appears to backpedal on her report.

Earlier this year, a motion by Khash demanding the return of his shares was quashed by a judge. In his ruling, Justice Herman Wilton-Siegel noted that if that happened before the projects were completed, Mr. Mizrahi may have to default on the loans he was forced to take when the original plan collapsed. The result, he wrote, “would be unconscionable.”

In his ruling, Justice Wilton-Siegel noted that when poor weather and construction issues delayed the project, Mr. Mizrahi asked for loan extension and explained the state of the projects’ finances. A detailed summary of the anticipated profits and expenses paints a grim situation after the debts are paid: there is expected to be “little to no equity left.”

The case returns to court later this month. No matter the outcome, Mr. Mizrahi is ready to move on. On the corner of Yonge and Bloor, the construction of the One Bloor tower, reportedly with a budget near $1-billion, is ongoing, with leasing for the building’s commercial space set to start in 2018. And the two properties on Hazelton and Davenport are mostly finished. All their 103 units have already been sold, according to their websites.

The Khavari family is moving forward too, expanding its presence in Toronto. Over the past four years, according to public records searched by The Globe and Mail, the family has purchased at least $12.1-million worth of properties under various names and legal entities. At the same time, they are responsible for roughly $11-million from 10 different mortgages, some of which have interest rates as high as 10 and 21 per cent.

With reports from Rick Cash and Colin Freeze