On a recent hot day, Robert Mays, a landscape architect with Toronto's transportation services division, stood next to a newly replanted street tree, rubbing one of its thick, waxy leaves between thumb and forefinger.

"These elms are tough trees," he mused. "Normally, they grow in a limestone cliff environment."

Their genetic lineage appears to have predisposed this species to survive in a considerably more hostile setting: a set of claustrophobic 1980s-vintage planters on Yonge Street, near St. Clair Avenue.

Most were cracked, defaced and filled with crud. Josh Matlow, the local councillor, described them "crumbling, concrete ashtrays." There are about 3,000 elsewhere in the city, mostly downtown.

The city earlier this month replaced 34 of these aging planters with new hardwood-and-brushed-steel models that offer somewhat more space for their deciduous tenants while improving the streetscape of a notably forlorn intersection.

It's merely the latest in a string of highly local attempts by the city to save its inventory of main-street trees – efforts that are typically hampered by maintenance budgets as skinny as their spindly trunks.

In this case, the $200,000 project, which included removing 13 dead trees, was financed with a one-time tranche of Section 37 zoning-variance funds from a high-rise development near St. Clair West and Avenue Road. Each is emblazoned with the name of the surrounding neighbourhood, Deer Park.

Mr. Matlow's beautification scheme vividly reveals the gnarly riddles and contradictions posed by the city's 15,000 main-street trees, which, as independent arborist Todd Irvine observes, collectively represent only a tiny fraction of Toronto's tree cover, yet attract a disproportionate amount of attention because of their visibility.

Mr. Mays readily admitted that the sleek new planters don't meet the city's own design standards, which, these days, call for street trees to be planted in highly engineered and irrigated "soil trenches" braced against the compacting force of sidewalks built to support the weight of a fire truck.

Such trenches – which contain more than 10 times as much soil as a planter – can only be installed when the road is reconstructed. They remain a relative rarity because they are so expensive – $15,000 to $20,000 a tree, compared with the $7,000 the city spent on the new boxes at Yonge and St. Clair.

Some experts say street trees should be at grade, while others say their chances of survival are greater when they're above the plane of the sidewalk and salty winter spray.

Cyclists use them to lock up their bikes while pedestrians still drop butts, trash and dog poop bags around their bases. For all that, Mr. Mays said the transportation department officially regards raised planter boxes as an obstacle to pedestrian movements on the sidewalk, even though some of the new models will double as benches. "At grade," he said, "is probably the way to go."

Another issue is that the city routinely underspends on maintenance, opting instead to take the less expensive option of replacing trees that have succumbed to their injuries or neglect.

The budget is less than $3-million a year and more than 800 are replaced annually. Mr. Irvine said that even the most sophisticated trench systems likely don't allow enough water to reach the root systems.

In a few cases, street tree deaths have had other causes. Five years ago, for example, the Bloor-Yorkville BIA planted more than 130 London plane trees as part of a $24-million facelift on the so-called Mink Mile. They all died quickly, most likely because that species isn't suited to this climate. (The BIA has replaced them.)

More generally, solutions have varied greatly from area to area, and reflect the highly localized nature of these projects. There are engineered trenches on University Avenue, parts of College Street and along Dundas Street in Regent Park.

A few years ago, a handful of west-end BIAs installed circular grates made from Corten steel as a means of protecting trunks and roots from bikes and locks.

On other stretches, such as Queen Street West, the city or the local BIA have placed low fences and flowers around the bases, again with the goal of keeping traffic away from the roots. (Mr. Irvine said trees in Lower Manhattan have survived for many years thanks to such low fences. Mr. Mays added, that in Toronto, trees tend to fare better on north-south arterial streets over east-west ones.)

Elsewhere, such as St. Clair Avenue West, spindly street trees are mostly left to fend for themselves, but for a seasonal application of mulch and the occasional watering.

This year, though, city crews wrapped some of the skinnier ones with a plastic mesh and small signs requesting cyclists to park their bikes elsewhere.

"I think our streetscape should be treated like our houses," Mr. Matlow said. Some merchants are trying to establish a new BIA at Yonge and St. Clair, he said. Once formed, it will be expected to fork out funds to take care of these new pieces of street furniture and the trees that live in them.

Whatever ultimately happens, the leathery leafed elms on Yonge north and south of St. Clair will continue to be expected to tough it out in their admittedly imperfect digs. As Mr. Mays said: "We very much consider this a retrofit project."

Whether the latest generation of tree boxes – and their occupants – last 30 years remains to be seen. 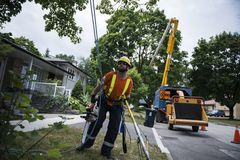