Japan's train and subway systems are marvels of modern human innovation and engineering. Tokyo's rail lines alone see more than 12 billion passenger trips per year, and annual on-time performance is measured in the seconds. It is safe, clean and efficient, and rightly regarded as among the very best public transit systems in the world. But for all its glitz and modernity, Japan's rail system has its dark side: over the years it has proven something of a magnet for suicide attempts. Japan's rail operators have come up with a raft of solutions to combat the problem, and with the same issue in Toronto's TTC and GO lines, there are important lessons to be drawn from the Japanese experience in regard to preventing rail-based suicides.

With a long history viewing suicide as an honourable way to die – tied to cultural aspects of "face," duty and atonement – taking one's own life has considerably less stigma attached to it in Japan relative to other countries. While the number of suicides in the country in 2016 was the lowest in 22 years, among G20 nations Japan has the second-highest suicide rate, behind only Russia. It has the sixth highest rate among all nations – nearly triple that of Canada's.

Roughly 6 per cent of suicides each year in Japan are the result of jumping in front of a train. While Tokyo police and rail crews have post-jump remediation efforts down to a grim science, the ripple effect of delays caused by a rail-based suicide – especially when they occur in central areas of Tokyo – results in commuter chaos.

Beginning in the late 1990s, when Japan's suicide rate was at its peak, through the present, Japanese rail operators began a number of initiatives to curb incidences of suicide-by-train.

Gliding into stations along Tokyo's flagship Yamanote Line, the bustling line connecting the capital's largest and busiest stations – one is greeted by a chest-high metal barrier whose doors open automatically upon a train's arrival. Known formally as Platform Screen Doors (PSDs), these barriers along a platform's edge are designed to prevent incursions – intentional or otherwise – onto the tracks. According to one 2015 study, installation of such PSDs in Tokyo rail and subway stations resulted in 76-per-cent fewer suicide attempts. Floor-to-ceiling barriers, as used in some Tokyo subway stations, as well as the metro systems in Hong Kong and Moscow, meanwhile, all but eliminate the possibility of track incursion.

While physical barriers make sense in both TTC stations and along often dangerously overcrowded GO Train platforms, their implementation is stymied by a lack of funding and political will. Outfitting 24 of the 29 stations of Tokyo's Yamanote Line with platform barriers, for instance, cost roughly $11-million per station – a number in line with estimates for installing barriers in Toronto's subway stations.

A second issue with PSDs is the ability of trains to stop accurately and consistently. There is essentially no margin of error when stopping a train using PSDs – if a train is not precisely located, the barrier does not open. While Japanese train drivers are expected to have a deft stopping touch, and are aided by automatic stop controls in stations with platform barriers, their Ontario contemporaries lag somewhat behind in that regard. The TTC's slowly-emerging automatic train control system will help as far as accurate stopping goes, but would not address GO trains' troubling proclivity to over/undershoot its correct platform location.

Standing along the platforms of Tokyo's labyrinthine Shinjuku Station – the world's busiest, with more than one billion passengers a year – one might spy innocuous LED panels emitting a pleasant blue light reminiscent of a bug zapper. As part of the considerable hidden psychological manipulation that goes on in Japanese rail station design, these light panels are strategically located along known suicide hot spots – usually the ends of platforms – as a means of discouraging jumpers. The theory goes that the calming effect of the blue lights will coax a distraught individual away from their suicidal impulse.

Large mirrors are often installed along with these blue lights. The thinking in Japan is that many suicide attempts are essentially spontaneous, and that those contemplating suicide are experiencing dissociative feelings. Accordingly, by catching a glimpse of oneself in the mirror, one experiencing these feelings is "regrounded" with a greater sense of self.

Installing lights and mirrors in Toronto's subway and train stations is a low-cost, low-effort endeavour with potentially tremendous benefit. Perhaps the only push-back might come from mental-health advocates in the province. Japan's attitudes towards psychology and mental health tend to be viewed as a bit gauche by Western academics, and the subtle psychological manipulation of rail passengers through light and sight might engender controversy.

In recent years, however, Japan's rail operators have switched to more ear-pleasing "train melodies." Ranging from jaunty, Disney-esque tunes to more wistful pieces, these jingles are carefully composed to an optimal length of just seven seconds. As part of rail operators' broader push to make stations more people-friendly, these soothing melodies were not specifically designed to prevent platform-based suicides, but rather as a means of calming awaiting passengers and lessening the stress of one's daily commute.

Both the TTC and Metrolinx could see benefits from implementing their own departure melodies.

Lack of stigma or not in the country, both train operators and media in Japan play down incidences of suicide by rail. In the event of delays, electronic signs on trains and above platforms flash the term Jinshin jiko – literally "human body accident." Only in rare instances do station suicides garner news coverage.

Train operators and media have long been aware of the so-called "imitative effect" of sensational media coverage of rail suicides. Indeed, one landmark 1987 study attributed a 75-per-cent decrease in suicides along Vienna, Austria's subway lines to a concerted media effort to minimize reporting of such incidents. One 2011 German study found a strong similar link.

Metrolinx and the TTC have long favoured euphemisms to refer to train suicides, but both began to break with tradition in 2016 by being more open about incidences of suicide on its lines. While praised by some mental-health advocates and practised with the best of intentions, this may have the unintended consequence of spurring on copycat jumpers.

It is a delicate balancing act between good-faith efforts at reducing the stigma around mental health in Canada while at the same time not unintentionally spurring on further suicides. 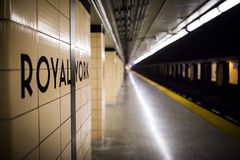 How the TTC’s subway auto-pilot will streamline your commute
June 2, 2017 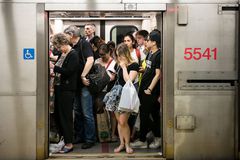 Death on the tracks: How bad is Toronto transit’s suicide problem?
December 16, 2016 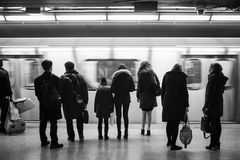