A sustainable kitchen; finding power in zoo-poo and celebrating our city's laneways and green rooftops: Here are four Torontonians who have gotten behind a project to make their city a more livable place, Madeline Smith writes.

In her time as assistant director and executive chef of Ryerson University's food services, Joshna Maharaj changed the food culture of a school where 3,500 meals are served every day.

For two years, she was a "perpetual cheerleader" for the importance of making food a central institutional focus, as well as a more sustainable – and appetizing – experience.

Ms. Maharaj reworked every level of the school's food system, from buying ingredients strictly from Ontario farms and businesses to asking kitchen staff to cook from scratch as much as possible. (She left Ryerson but has continued her work as an activist chef.)

"I'm test-driving the idea that the sustainable approach to managing your kitchen is just something institutions should do, full stop," she says. "This is just a proper way to do this – a good way to run a kitchen, and perhaps a more responsible way to manage public money."

Ms. Maharaj is no stranger to the herculean task of managing institutional-sized food services. She previously overhauled the menu at Scarborough Hospital and the food-purchasing network for Sick Kids. She believes good food policy, at any level, is the starting point for a sustainable approach to everything else, from community health to environmental awareness.

"The beautiful thing that my institutional work has taught me is that when you have communities that are potentially suffering because of a lack of good food connection, you can bring them back to life," she says. "I see it. Those connections can bring people closer to each other."

Ms. Maharaj has seen the Ryerson community make a success of Rye's Homegrown, an initiative whose crown jewel is a rooftop garden on the engineering building. Last November, staff and student volunteers harvested 3,600 kilograms of produce from campus gardens.

Jonathan Silver is a kind of environmental philosopher.

One of his recent projects, the Living Architecture Tour, is a map for Toronto visitors and residents to take themselves on a tour of some of the city's green roofs and walls – spots where vegetation is incorporated into a building's architecture.

"People spend their entire day at an office, and there might not even be living plants there. Then they get on the TTC, and they go home, and there's still nothing," Mr. Silver says. "They miss all of those really great benefits of green spaces in the sense that they're life-saving."

The map, illustrated by urban geographer and Globe contributor Daniel Rotsztain, stemmed from an idea Mr. Silver had while he was interning at Green Roofs for Healthy Cities, where he started to think about how he could increase awareness about the benefits of vegetative infrastructure. Green roofs, for instance, can help absorb storm-water runoff and make heating or cooling a building more efficient.

Twenty-six spots are highlighted where publicly accessible green spaces can be found, from the Gladstone Hotel to the City Hall podium, the largest green roof in the city. Mr. Rotsztain also drew public transit lines and recommended bike routes into the map, encouraging eco-friendly transportation options.

Mr. Silver's work focuses on finding accessible ways for people to interact with environmental issues. Some of his previous work includes setting up a booth in a park offering free coffee, and engaging takers in a conversation about how sun-grown coffee is linked to the destruction of the rainforest.

While green roofs and walls can be easily missed the city, Mr. Silver believes they represent a prime opportunity for Toronto to make a positive impact on the environment.

"We have to have it in order to move forward as a sustainable city. Cities cannot exist without more living infrastructure," he says.

Daniel Bida has spent the past five years advocating for what he calls a "poo-to-power story."

Mr. Bida, the executive director of the ZooShare Biogas Co-operative, is pushing forward plans to build a biogas plant across the street from the Toronto Zoo, where the zoo's manure and non-edible organic waste from a yet-undisclosed grocery chain will be processed. As the waste breaks down in the plant, the resulting gas is captured and burned in an electrical generator, and Mr. Bida says the resulting output will be enough to power 250 homes.

"As long as we as a society continue to produce organic waste, we can always make biogas and turn it into electricity or use it for another purpose," he says.

The Toronto Zoo first floated the idea for a biogas plant in 2003, but it wasn't until 2010 that concrete plans started to materialize. The ZooShare Biogas Co-operative spent 18 months selling community bonds for the initiative, ultimately raising more than $2-million. They received renewable energy approval from the province and have construction plans this year.

There are other biogas plants in Ontario, but Mr. Bida says none is centrally located in Toronto. ZooShare says this will be North America's first zoo-based biogas plant, and organizers hope its presence will encourage Torontonians to think about the impact of the every-day ways they take out their garbage.

"If I tell you our emissions impact is taking the equivalent of 2,000 cars off the road, and collectively we need to remove more than a million, it doesn't really sound like very much," he says.

"I like to subscribe to the theory that small is beautiful, and I think if we each do our part, each take these small steps one at a time, we can all collectively get there."

For the founders of the Laneway Project, narrow alleyways are the perfect venue to squeeze community engagement into an already dense environment.

Ariana Cancelli, an urban planner, started up the initiative with Michelle Senayah, an architect, in 2014. They aim to change the way Toronto residents perceive and interact with more than 2,000 publicly owned laneways in the city.

Getting communities on board wasn't difficult – when project organizers issued a call for applications, they got 25, and had to narrow it down to just two. Reggae Lane, in Little Jamaica, and a residential laneway in West Queen West are currently planning a redesign with the project's help. Since then, Ryerson University has also gotten involved, and a project for O'Keefe Lane on campus is in development.

"The biggest step is to be able to provide people a place to find respite from the city," Ms. Cancelli says. "Parks are great for that but, sometimes, you need something even closer to your home."

Some of the most challenging work, Ms. Cancelli says, is changing the utilitarian perceptions about Toronto alleyways.

"'Laneways are for garbage and driving and cars,'" she says. "It's really a change in mindset – there's a long way to go before we can start using our laneways in a completely different way."

One of their pilot projects, the laneway puncture will see "strategic incisions" in paved laneways filled with plants. The idea is that interrupting the pavement along central drainage channels, and filling it instead with soil and other permeable materials, will ease the burden on the city's storm-water drainage system.

Ms. Cancelli hopes that community-supported "green corridors" will spring up around Toronto, connecting residents over much-needed room to breathe, and maybe even giving some of the city's aging infrastructure a break.

"We need to have more of these spaces. We're intensifying and densifying as a city," she says.

President puts University of Toronto’s expertise to work in the community
August 19, 2016 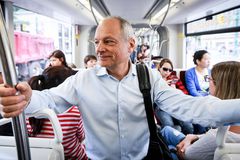 Toronto’s bone-dry fountains send the message that nobody gives a damn
August 12, 2016 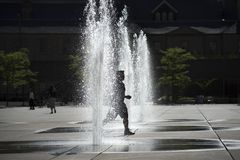