It's been a cold winter, all right. To get a sense of just how cold, take a trip down to the waterfront. Toronto Harbour is frozen from the mainland to the islands.

Look south from the ferry docks and you see an Arctic vista of ice and snow. Visit the islands, look back at the city and you see the jutting towers of the skyline overlooking an icy pallet of whites and greys. It's as if downtown Toronto had been plunked down beside a lonely northern lake.

It is not that this has never happened before. The protected, shallow waters of the harbour will freeze over in a cold winter. It's a strange and haunting sight all the same.

Take the ferry trip over to Ward's Island, the only winter route across the harbour, and you can see the ice up close. On the day I visited last week, the sole winter ferry, the Ongiara, shuddered as its two Caterpillar C-12 marine engines pushed the 70-foot craft through a narrow, ice-strewn channel kept open for its back-and-forth trips.

More than once this winter, the ferry has become stuck in the ice, forcing the city fire boat, the William Lyon Mackenzie, to steam over from its station on the western waterfront and break it out. Even when it doesn't get stuck, the Ongiara usually moves at only around three knots (5.6 kilometres an hour), not much better than a walk. The trip often takes about 20 minutes, three times what it does in summer.

Skipper Bill Barnes says the ice is the worst he has seen in 20 years. "This is really bad," he says, coaxing the 340-horsepower engines with a metal throttle like the one you might find on a Muskoka launch. "It's hard on the boat."

Docking is an issue, too. When the wind pushes ice floes into the U-shaped dock at Ward's, crews sometimes have to flush them out with fire hoses or call on the Mackenzie to blast them with the wake from its churning propellers.

The Ongiara can make the passage only because the Mackenzie comes out every morning at 5 to open up the channel. With a crew of seven aboard, the 81-foot fire boat uses the power of its own twin 700-horsepower Caterpillars to crash through the ice. "We are basically a freight train on water," says senior marine captain Adrian Lewicki.

Look over the blunt bow of the fire boat, as I did on a visit last week, and you can see the ice sheet crack like a windowpane as the vessel approaches, then break up into slabs the size of windows or doors and slide out of the way or disappear under the hull of half-inch steel. Despite its bulk, the 50-year-old vessel bucks like a filly as it goes, forcing passengers to grab for the nearest rail.

The Mackenzie keeps four other channels open through the harbour so it can respond to potential emergencies. The crew sometimes spends eight to nine hours on the water and they see all sorts of things: owls swooping from the sky; coyotes and foxes trotting over the harbour surface as if they did it all the time. Once last month, they found two swans frozen in the ice. The crew chipped them out and they waddled off.

People take to the harbour, too, though authorities strongly discourage it. On the day I joined the Mackenzie, a woman in a parka skated over the open ice near Snake Island and a sleek ice boat whipped by, taking advantage of the brisk west wind.

On a typical winter, the Mackenzie might do four to six weeks of icebreaking. This winter it has already done seven and Capt. Lewicki says he thinks it will break its record of 78 consecutive days set in 2003-04.

Some winters the harbour is clear of ice altogether; others it is filled with a slurry of ice chunks. This year Capt. Lewicki says his crews are seeing "big sheets of ice the size of Saskatchewan moving around." When they measured the ice recently, it was 22 inches thick at one point, or about 56 centimetres.

The prevailing west wind tends to drive the ice to the east end of the harbour, and with the Eastern Gap frozen over, it doesn't flush out into the lake, as it might some years. With nowhere to go, the ice stays. The Mackenzie tried to batter a channel through the Gap this week, but got no more than a boat length before grinding to a halt in hard blue ice.

Toronto tends to turn its back on the lake even in the best of weather. That's doubly true in the winter, when the waterfront is mostly deserted and few except hardy island dwellers make the ferry trip. That's a shame. For a few more weeks, weather permitting, Toronto stands on a stage of ice. That is something to see. 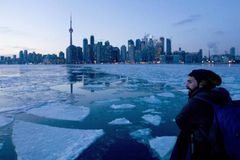 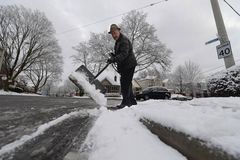 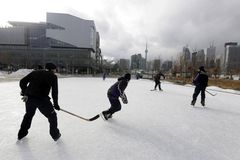 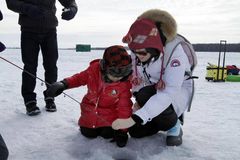