Neighbourhood mothers swept the front stoop of Kwame Duodu's home Monday, tidying and adding to the memorial for the 15-year-old and his 16-year-old friend O'She Doyles-Whyte, who died Friday after shots rang out in broad daylight at a town house complex in the Jane and Finch area.

Police are currently searching for three suspects who witnesses say fled the scene on bicycles that police believe they have located near the scene at 287 Grandravine Drive.

Sara Goldvine with TCH confirmed the camera vandalism happened recently at the Yorkwoods complex on Grandravine Drive and that they are working to fix the surveillance equipment and apprehend the vandals.

Ms. Goldvine could not confirm details on the timing or budget for those repairs.

In the meantime, the neighbourhood is reeling from Friday's double homicide that brings the total number in the area to four in the past six months. All of those slain were minors who died after being shot and according to social media messages, they all knew each other.

Mr. Doyles-Whyte, whose Twitter account was under the name, R.I.P. Tubby & Skinny, sent out a condolence message to his friend "Skinny" Friday before he died. "R.I.P my g Skinny truss me can't believe ur gone," reads Mr. Doyles-Whyte`s final tweet. Tahj Loor-Walters, otherwise known as "Skinny," is the 16-year-old who died in hospital two weeks after he was shot in July this year. "Tubby" refers to St. Aubyn Rodney, the 15-year-old killed in the area in February.

A friend of Mr. Duodu's family says he's upset about the violence in the neighbourhood.

Mr. Asamoah has lived in the area for 15 years and watched Mr. Duodu grow up. "He was always smiling," he said.

He also knew Mr. Doyles-Whyte and said both boys had worked over the summer.

"At the ages of 15 and 16, to pick themselves up and find a job, that's saying something," he said. "They were staying out of trouble."

According to residents, Mr. Duodu had a summer job as a camp councillor.

"The last memory I have of him [Mr. Duodu] is walking with those camp kids," said Mr. Asamoah, who said he had seen both teens with the camp children.

"He was a happy boy on the right track," he said of Mr. Duodu.

A local social worker who wished to remain anonymous said she knew Mr. Duodu was excited to work over the summer.

Police are asking that anyone with information come forward or call Crime Stoppers. 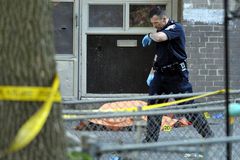 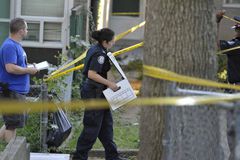