Toronto police Constables Leslie Nyznik, Sameer Kara and Joshua Cabero were suspended with pay earlier this month, after a parking enforcement employee said she was assaulted in mid-January. After a subsequent investigation, all three officers were charged Thursday with sexual assault and gang sexual assault.

Police Chief Bill Blair said the alleged assault is being taken "very seriously" by the force.

While the chief declined to discuss details of the alleged assault, a Toronto Police statement said the charges follow a Jan. 17 incident, and the accused were all off-duty at the time.

All three appeared at a north Toronto courthouse Thursday morning, where they were released on $15,000 bail. Video footage from media reports shows the three men, dressed in black, declining to speak with reporters as they left the courthouse.

The lawyer for the three men, Gary Clewley, who has represented the police union in the past, did not respond to requests for comment. And two of the men who served as sureties for the accused declined to comment when reached by telephone.

Police spokesman Mark Pugash said none of the three officers has ever appeared before the Toronto police tribunal for charges under the Police Services Act.

But one of them, 38-year-old Mr. Nyznik, is a named defendant in a continuing $1-million civil lawsuit against Toronto Police by a Toronto man alleging police brutality and false imprisonment.

In court filings, Rudolph Raymond Costain claims Mr. Nyznik assisted his partner, Christian Dobbs, in "repeatedly and unlawfully" assaulting him as he lay on the ground unconscious while being arrested in April, 2010.

Mr. Costain's statement, which has not been proven in court, claims the officers later tried to cover up the incident "by preparing untruthful and inaccurate notes."

Dashboard camera footage of the incident earned the officers a rebuke from Chief Blair in 2013, according to media reports at the time.

Mr. Nyznik has been with the TPS for five years, and, along with the two other accused, works out of 51 Division, which serves the eastern side of downtown Toronto.

Mr. Cabero, 28, has been a TPS officer for four years. Mr. Kara, 31, meanwhile, has been with the force for six years.

All three accused remain suspended with pay, Mr. Pugash said. Ontario's Police Services Act stipulates that all police officers who are criminally charged be suspended with pay until the charges have been dealt with by the courts.

The officers are scheduled to appear again in court next month. Meanwhile, their bail conditions prohibit them from contacting the alleged victim or one another. They're also banned from drinking alcohol, carrying firearms, and attending several downtown restaurants and bars.

With report from Elizabeth Church 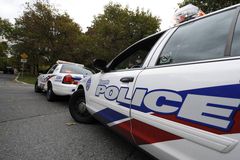