The news this week that Dangerous Dan's will close at the end of May hit Riversiders like a ton of ground beef. But while the venerable burger joint's demise is a blow to the meat-loving masses, the restaurant's passing is just another sign of the changing times at the junction of Queen and Broadview. For 18 years, from his window seat at the front of his bustling diner, Dangerous Dan's owner James McKinnon has watched the corner gentrify, literally in front of his eyes. We got his grill-hot take on the morphing intersection.

Dangerous Dan's (named after owner McKinnon's grandfather) opened in 1999. Early in 2015, McKinnon put his business and lease up for sale. Corporate fast-food chain Pizza Nova bought the whole building, and now, after failing to come to a new lease agreement, McKinnon and his outrageous burger inventions (including such meat monstrosities as the Big Kevorkian and the Colossal Colon Clogger Combo) are leaving. Nearby, a new Korean fried chicken restaurant has opened. Kaboom Chicken attracts a crowd more hip than the blue-collar clientele of Dangerous Dan's, but Mr. McKinnon never saw the eatery as competition. "The chains have half the market," he says. "Little guys like me and Kaboom Chicken are just nibbling on the edges." Speaking of chains, Pizza Nova released a statement this week saying it hadn't decided on future plans for the corner location.

The corner has long been anchored by Starbank Convenient Mart, catering to the 24-hour crowd. Just to the west, for 28 years, the humble, unlicensed Tex-Mex restaurant Coyote Willie offered taquitos, enchiladas and, according to one critic, "the best burritos." Last week, the heroically unchanging establishment took down its sombreros and shut down for good. "They were smarter than I was," says McKinnon, referring to the Coyote Willie owner-operators. "They bought the building when they had the chance." Owners Jacques Bujold and Wilson Chee-Hing purchased the building at 689 Queen Street East in 2000 for $285,000; today it's assessed at just under $1-million. Mr. McKinnon remembers catering to the workers at the old Lever Brothers soap plant to the south, where lofts and condos have replaced factories in the area. "A lot of businesses we used to deliver to are gone," Mr. McKinnon says. "People live here now, but they don't work here."

The controversial eviction of the Real Jerk in 2012 was the first sign of the intersection's transformation. The popular Caribbean-themed restaurant now serves its oxtail in a pair of east-end locations. Replacing the Real Jerk was An Sibin Pub, a lively Guinness-giving tavern that suddenly closed in the fall, citing "unreasonable and many rent increases." Mr. McKinnon was surprised. "If you were to have asked me which business around here I thought would go under, An Sibin would have been the last one I would have picked. It was a really busy place." Nearby, where a small branch of Bank of Montreal unobtrusively existed for decades, there's now Canna Clinic Toronto, a marijuana dispensary. Dangerous Dan's menus included suggestions for medical marijuana patients. "I'm not promoting the use of cannabis in any way, but the dispensary's clientele were very good customers of mine."

The centrepiece of the gentrifying neighbourhood is the Broadview Hotel, an elegant Victorian hulk that has towered over the intersection for more than a century. For many years, the ground floor of the flophouse was home to Jilly's, a well-worn strip club. In 2014, the peelers packed up their poles. The building was bought by Streetcar Developments to create a 58-room boutique hotel. Rebranded as the New Broadview Hotel, the hoped-to-be hot spot is slated to open this year. Through the windows of his diner, Mr. McKinnon initially watched the extensive renovation of the hotel with enthusiasm. "I thought the hotel would be great, but, ultimately, it's what put me out of business," says the burger-flipping maestro, citing rent increases. "I'm going to miss it."

No hard feelings for owners who lost store to Queen West gentrification
April 10, 2017
As Toronto's Fashion District changes, small businesses are feeling the heat
May 17, 2018 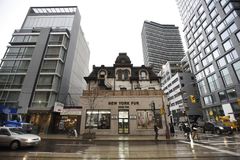 Neighbours at Queen and Bathurst ready to accept Toronto injection sites
May 16, 2018 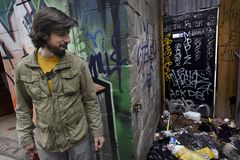