A mother of three, Guang Hua Liu lived in a middle-class neighbourhood in Scarborough. A licensed holistic practitioner,  she became the owner of a spa in May.

A friend dropped off the 41-year-old businesswoman at the Forget-Me-Not Health Care spa on Friday, Aug. 10 around 6:30 p.m.

The following Wednesday, hikers made the grisly discovery of a foot with yellow-painted toenails in Mississauga's Hewick Meadows Park, about 45 kilometres west of where she lived in east-end Toronto. Police later recovered a head and two hands from the Credit River. Then, on the weekend, more human remains were discovered in Scarborough's West Highland Creek, which is within walking distance of Ms. Liu's home.

Peel police said Tuesday that Ms. Liu was the victim of a gruesome killing and dismemberment.

The stunning announcement comes after a summer of violence that began with the brutal slaying and dismemberment of Chinese international student Lin Jun that left Canadians reeling. Luka Rocco Magnotta has been charged in that death. Toronto has also experienced a spate of shootings in public places, including the Eaton Centre, that had residents in fear.

In the case of Ms. Liu, police say her body parts had been left in the water for five to seven days.

There is no waterway connecting the two sites, suggesting Ms. Liu's killer might have strewn her body parts across the city. But for now, both Peel and Toronto police have called off the search for more remains.

Instead, they are focusing on piecing together the circumstances behind Ms. Liu's disappearance and death, which officers are treating as a homicide even though they have not determined cause of death.

Helen Savo-Sardaro, who works in the building where the Forget-Me-Not spa is located, went to the spa twice to get her eyebrows done since May, when Ms. Liu took over the spa from the previous owner.

"It just crossed my mind and … I had seen her with yellow toe-nail polish the day I went to get my eyebrows done," she said, adding she instantly feared the victim might be Ms. Liu. She told her building manager about those fears. Later when police confirmed the identity, Ms. Savo-Sardaro was stunned.

"I'm still in shock. I can't imagine this happening to somebody in our community here," she said.

A few doors down from the spa, Jong Soon Suh teared up when she heard the news about Ms. Liu's death.

"It's a nightmare," said Ms. Suh, who has owned a dry-cleaning business in the complex for nearly 18 years.

Ms. Suh said a man came into her store with a missing poster of Ms. Liu last week. He was visibly upset and said that Ms. Liu was his girlfriend.

A Canadian citizen, Ms. Liu lived in a townhouse in Scarborough near Huntingwood Drive and Kennedy Road, within walking distance of the creek where her two calves, arm and thigh were found.

She lived with her adult son, while her two younger children lived with their father.

A neighbour, who did not want to be named, said she sometimes went by the name Heather.

She added Ms. Liu's son spoke better English than his mother, but it seemed like it was not his first language either.

"We've never had a problem here. This is shocking," the woman said of her neighbourhood.

Neighbours could not recall any unusual activity around the townhouse where Ms. Liu lived.

On Tuesday, potted plants hung off the awning of the garage of Ms. Liu's house and the lawn was neatly mowed. A crumpled phone book sat next to the front door and white blinds on the main-floor windows were pulled shut.

Peel Inspector George Koekkoek said it is too early to talk about a possible suspect, but police don't believe there are other victims.

"We have no reason to believe that this is anything other than an isolated case and that's the focus of our investigation thus far," Insp. Koekkoek said.

With reports from Amanda Kwan, Oliver Moore and The Canadian Press 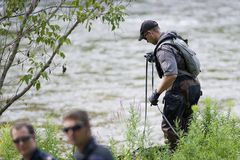