As all children and many adults know, there's something deeply enticing about playing on the road.

But a growing number of international cities have leveraged the allure of that normally prohibited behaviour to create hugely popular festivals that allow tens of thousands of residents to literally take to the streets with their bikes, blades, boards, wheelchairs and strollers.

During a trip last winter to Guadalajara, Mexico, which played host to the 2011 PanAm Games, downtown councillor Kristyn Wong-Tam found herself swept up in one such event – the Via RecreActiva – that involves closing more than 60 kilometres of roads to vehicular traffic on Sunday mornings, when traffic in the city of 4.3 million is light.

"I've never experienced anything so transformative in my urban life," said Ms. Wong-Tam, who borrowed a bike and rode it from Guadalajara's historic core to its far-flung suburbs, passing a wide array of street-side events and impromptu soccer games.

Inspired by Guadalajara's event, Ms. Wong-Tam told The Globe she plans to introduce a motion at council later this month asking the city to begin looking at launching something similar here in the summer of 2013.

With cyclists furious about the Jarvis bike lanes and many drivers still smarting from the summer construction season, it might not seem like a fortuitous moment to be debating street closings.

Proponents disagree: "We never talk about closing the streets," said 8 to 80 Cities executive director Gil Penalosa, a public-space advocate who has advised cities around the world on how to plan their own versions. "We talk about opening the streets to people and closing them to cars."

Mr. Penalosa, in fact, helped organize the first of these "ciclovias" – Spanish for bike ways – in Bogota in the 1980s. Over the past few years, the idea has spread rapidly as cities like New York, Portland, Ore., and even Winnipeg hand parts of their street networks over to pedestrians and cyclists on weekends, some occasionally and others up to once a month. Ottawa has, for years, closed the parkways along the Rideau Canal on Sundays for cyclists. Vancouver launched its own ciclovia in 2011.

Bogota's ciclovia takes place every Sunday from 7 a.m. to 2 p.m, has drawn up to two million participants, and significantly reduces smog for the duration.

While Mr. Penalosa noted that such events are fundamentally about accessible recreation and physical activity, Ms. Wong-Tam argued a Toronto version could be a way to kindle enthusiasm for the 2015 Toronto PanAm Games.

"I love the idea of a mass participant event," said Bruce Kidd, a former Olympian who has been outspoken about the lack of interest around the 2015 Games. He added that events like the "Ride for the Cure," on the Don Valley Parkway, show how "liberating" it is to travel on spaces normally reserved for cars.

Those who've been involved in ciclovias elsewhere say events, when planned properly by municipal roads officials, don't gum up streets like marathons because vehicles can still cross the route. "It does not shut down the city," Mr. Penalosa insisted.

Others point out that local businesses have leapt at the opportunity to take advantage of the crowds along the route. "Proprietors are telling us this is our busiest day of the year," said Jonathan Parfrey, a board member of L.A.'s CicLAvia, which held its fifth annual festival Sunday. "We've found there is some economic development taking place."

The notion of shutting down streets for special events – from Nuit Blanche to marathons, jazz festivals and the Santa Claus parade – is hardly new to Toronto. And in Kensington Market, summer car-free Sundays have gone some distance toward reviving the fortunes of local merchants.

But closing or partially closing longer networks of arterials to cars on a more regular basis would require the city and the TTC to develop alternate routes and ensure the public and local merchants know what's planned.

Ms. Wong-Tam will be asking council, officials and residents to develop a route that connects both the core and outer areas without creating traffic snarls. "If this is not good for business," she said, "it will not be repeated."

In traffic-addled L.A., politicians were initially skeptical, said Damien Newton, editor of L.A. Streetsblog. But they were pressed into action after the mayor, Antonio Villaraigosa, broke his elbow in a cycling accident.

The first CicLAvia "changed the conversation" about liveable streets, he added. "There really was a latent demand for streets where people could take a walk and bike safely." 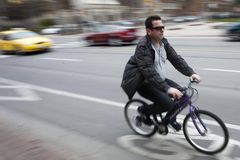