Toronto council narrowly backed John Tory in his push to keep the eastern Gardiner as an elevated highway, a crucial win for the mayor that nonetheless showed a weakness in his young administration and laid bare stark divisions in the city.

After weeks of intense lobbying and divisive politicking, council voted 24-21 Thursday to rebuild the aging highway largely the way it is now. Work is expected to begin around the end of the decade.

"Today, city council has made an important decision for the future of the city," the mayor told reporters moments after the vote. "It was also a difficult vote. There were and are deeply held views on this issue. … I respect that and I respect all the people who hold those views, no matter what side."

Two options were being debated: rebuilding the Gardiner east of Jarvis with slight revisions or replacing it with a street-level boulevard. The first choice will cost $921-million over the life of the infrastructure but have less impact on drivers. The latter option would cost $461-million over the long term, slow some drivers and free up more land for development.

Mr. Tory came out strongly weeks ago in favour of keeping the highway. His success Thursday came at a cost. In spite of his large mayoral victory last year, Mr. Tory was shown to have a limited hold on council on an issue he had championed vigorously. And the result threatens to drive yet another split between the city's core, where no councillors supported the mayor, and the suburbs.

"We have a different culture in the suburbs. I know, I live in Willowdale," Councillor John Filion, who supported removing the highway, said during the debate. "I would never dream of imposing Willowdale culture or Agincourt culture on the people who live downtown, and that's what we're about to do today."

Mr. Tory, asked about his campaign promise of uniting the city, told reporters it was implausible to think he could mend old divisions in such a short time.

"We have more work to do," he said. "But, you know, I didn't think we'd be able to come down here as mayor … and in six months would be able to sort of eliminate historic, difficult, long-standing issues that have been difficult before."

The mayor also rejected suggestions that his victory was too narrow for what has been characterized as an 80-year decision, listing other close votes at council. "At the end of the day, this is a democracy," he said.

Former mayor Rob Ford used the opportunity to take a symbolic stand in favour of keeping the highway exactly the way it is. He was voted down overwhelmingly but, if he runs in 2018, will be able to campaign as a champion of the roadway.

"The maintain option, from what I hear from people, is what they want. The tear-down, definitely I don't want. And the hybrid, they don't understand," said Mr. Ford, who is recovering from cancer surgery and came only to part of the debate, sporting a bright red sweatsuit. He seized the opportunity to take a swipe at his successor.

"He's all over the place. To be quite frank, you can't respect a mayor who's flip-flopping constantly," Mr. Ford said. "On carding, on the TTC, even if you oppose him, you can't respect that. He's going to start losing votes quickly. Anyone can see that."

Council's decision came on the second day of fractious and occasionally emotional debate over what to do with the Gardiner east of Jarvis. The final vote was on a complicated motion that supported the rebuild proposal officially on the table, but also called for more study on the feasibility of moving it, selling it, tolling it or possibly tunnelling it.

The planning on the fly clearly frustrated some councillors. Seeking to highlight the fanciful nature of some of the proposals, Janet Davis jokingly proposed building a causeway across the harbour and out through the western channel. And she warned that support for keeping a rebuilt Gardiner will probably lead to lawsuits against the city.

"We will be in litigation with developers whose lands have now been obstructed by that option," Ms. Davis said. "We will be revisiting this question again in the fall. I think the discussion is not over, frankly."

Beneath the Gardiner, a soul-destroying wasteland lurks
May 15, 2018 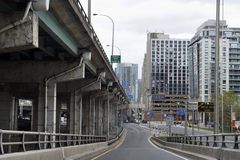 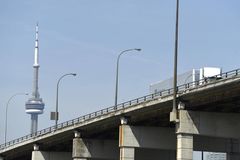 Gardiner debate a big test of Mayor Tory's hold on council
May 15, 2018 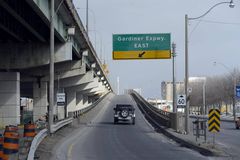