Toronto city council has endorsed a plan to boost the number of beds in its already jammed shelter system, but declined calls to open the Canadian military's armouries in the city to the homeless.

Activists and some city councillors have been calling for the emergency use of the cavernous Fort York and Moss Park armouries – last opened to the homeless in 2004 – for weeks.

But Mayor John Tory and city shelter staff have said repeatedly that while opening armouries remained an option, they were not an ideal place and that efforts instead should be made to open more conventional city shelter spaces.

Joe Mihevc, a left-leaning city councillor who aligned with the centre-right Mr. Tory on the issue, moved the motion at council to approve the plan. It passed 39-3 on Wednesday, while a motion to request the opening of armouries, moved by City Councillor Kristyn Wong-Tam, failed 17-25.

Mr. Mihevc said the plan was in line with a call by Mr. Tory this week for the city to spend $10-million and open an additional 400 shelter beds as soon as possible. In all, Mr. Mihevc said the city will spend more than $100-million in phases to create another 1,000 shelter spaces or other emergency options for the homeless.

"This is a major investment in the shelter system of Toronto that hasn't happened in at least a decade," Mr. Mihevc told reporters.

"I am delighted that the motions went forward. I am disappointed that it didn't go far enough for some folks."

But many on council's left wanted more proper shelter beds and warned that much of the new space would be created in isolated, run-down motels.

Asked about the armouries, Mr. Mihevc said they were not designed to be shelters and that agreements to use them would have to be worked out with Ottawa before they could be opened.

He also pointed to numbers from city staff about the last time the city and the federal government agreed to open them to the homeless, when the arrangement cost the city much more per bed than its conventional shelter space.

But Mr. Mihevc said they remained an option if the city sees a further surge in homelessness. The mayor has been on the defensive on the issue after strident calls from some councillors to both open the armouries and declare a state of emergency – things he said city staff have told him were not appropriate. On CBC Radio this week, he said he was angry at what he called a small group of activists who insist that the armouries are the only solution.

Speaking to council on Wednesday, he said that if the city officials and external experts he consulted on the homelessness problem had told him to open the armouries, he would have done it.

"I assure you, I would not have waited to go back to my office, I would have pulled my phone out of my pocket and called the Minister of Defence and said, 'We need the armouries,'" the mayor said.

City officials did say they had just in the past few days contacted Ottawa about possible future use of the armouries, but had not heard back.

During the debate, Toronto Liberal MP Adam Vaughan announced on Twitter that Ottawa would be willing to offer the armouries. In an interview, he said that in anticipation of Wednesday's debate, he had inquired about the armouries himself. They could be used, he said, if the city made a request and the details could be worked out.

"What we're saying is, we're ready. We're standing by to offer what assistance we can," Mr. Vaughan said. "We've used the shelters before for homeless folks. And we're prepared to do it again."

Council's vote against the idea prompted an outcry from a handful of activists from the Ontario Coalition Against Poverty in the council chamber.

"Shame on you! Shame on all of you! People are dying on the streets and you can't even ask for the armouries!" shouted long-time local activist Gaétan Héroux, as he was escorted out by security. "Where's your phone, Tory? Give me your phone! I'll phone! " 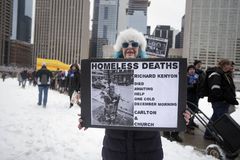 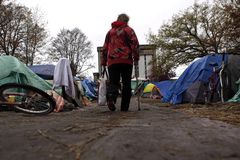