The Globe and Mail caught up with Deputy Mayor Norm Kelly Monday to discuss how Toronto is coping with the ice storm. Mr. Kelly, who has been granted some of the powers previously held by Toronto Mayor Rob Ford, does not have the authority to declare a state of emergency – that is a statutory power held by Mr. Ford by law. Mr. Kelly said that he has not been involved in the mayor's conversations about whether or not a state of emergency needs to be called.

Mr. Kelly said on Sunday he spent most of the time with the emergency officials, but today is driving through the various communities he represents as a councillor to get a first-hand look at what's going on.

I'm in a lovely neighbourhood called Bridlewood and that's at roughly Pharmacy and Sheppard.

AS TO WHETHER THERE SHOULD BE A STATE OF EMERGENCY DECLARED, WHAT'S YOUR TAKE?

I know that yesterday evening, they were talking about it and apparently the mayor was advised to declare a state. I wasn't part of those conversations.

WHO ADVISED THE MAYOR?

I'm not sure because I wasn't privy to those conversations but the mayor has the statutory power to declare an emergency. The issue pivots on whether declaring a state of emergency brings you more aid than if you didn't.

COULD YOU CLARIFY WHAT IS THE ANSWER TO THAT?

I've been trying to figure that out myself as well. I know that as a result of my conversation with the [Ontario Premier Kathleen Wynne] yesterday that the senior people on her side initiated the conversation with senior people on our side and they've been discussing the matter ever since. So it may be that without declaring an emergency, we still get the assistance of the province. What counts is getting as much help as quickly as possible, one way or the other.

BUT WE DON'T KNOW THE ANSWER TO THAT?

I've heard two different stories, some people have said yes it will. There may be financial implications involved or there may be some legal, technical issues at stake as well. I'm not too sure, but I've asked staff to give me as detailed an analysis of the issue as possible because whenever you advocate for something, you want to be as informed as possible.

ARE YOU SATISFIED WITH THE WAY ROB FORD HAS HANDLED SITUATION THUS FAR?

Yeah, I'd say yes. He's come forward, he's taken a public position, as I have, and I think that we complement each other. We're both doing our very best for the residents of the city. On the issue of whether there should be an emergency declared or not, as I've said, I'm pragmatic about that.

WHAT WOULD IT TAKE?

What I try to do is get as much information on that as possible. If I thought, as a result of looking at that information that we could get more aid faster, given the numbers of people who are still out there without power, then I would push forward. But if it would turn out that it wouldn't make much of a difference, then why do it if you don't have to?

YOU ARE OUT VISITING CONSTITUENTS. WHAT ARE YOU HEARING?

A great many of them had their power restored late last night so they were grateful for that. Many of them reached out to friends and family and had them come over to their houses last night to share the warmth. A lot of the people who are on the streets today are helping each other, they're moving branches, they're salting driveways, they're chipping the ice off of sidewalks. So there's a real sense of community, of helping your neighbour, of connecting with your friends and family, so in my eyes, a very positive response, and I'm really happy to see that resilience out there.

DID YOU HEAR ANY STORIES OF PEOPLE IN DANGER WHO NEEDED IMMEDIATE ASSISTANCE?

DO YOU HAVE POWER TO CALL STATE OF EMERGENCY?

No, I don't, that statutory power rests with the mayor and once declared, the authority then pivots to the deputy mayor's office.

WHAT'S YOUR FEELING ON IT?

I think we're trying to do the best job we can. These things don't come along that often so you do your best when they do happen.

WILL YOU BE HOLDING A PRESS CONFERENCE YOURSELF? MAYOR FORD HAS ONE SCHEDULED FOR THIS AFTERNOON AT 4 P.M.

IS THERE ANYTHING YOU WANT TO HEAR FROM HIM THIS AFTERNOON?

No, I guess. I'm in constant touch with the emergency office myself so I want to make sure I'm up to date with everything.

HAS THIS AFFECTED YOUR OWN FAMILY AT ALL? 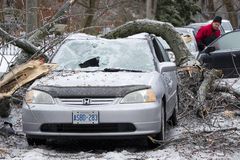 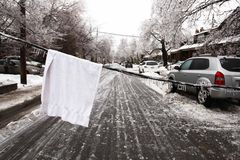 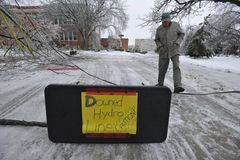