On a motion from deputy mayor Ana Bailao, Mayor John Tory's key lieutenant on affordable housing, the city's planning and growth committee voted unanimously on Wednesday to prevent homeowners from renting out secondary suites on services such as Airbnb, an effort to keep these units in Toronto's tight market for long-term rentals.

"We have an entirely unhealthy vacancy rate in this city," Ms. Bailao told the committee. "If you are a renter trying to find a place to live in this city, you are really having a bad experience. It's frustrating; it's desperate."

The centrepiece provision of Toronto's proposed regulatory regime, unveiled by city staff in June and headed before city council next month, would ban people from listing an apartment or a house for a short-term rental – fewer than 28 days – unless it is their principal residence.

But unlike the short-term rental rules passed in Vancouver this week, the regulations originally proposed by staff in Toronto would have allowed homeowners to list secondary suites – which must have their own entrance, kitchen and bathroom – on the service and others like it as long as the suite was legal and inside their primary residence.

Airbnb has run a lobbying and public-relations campaign as Toronto drafted its rules over the past several months that urged city council to allow listings of secondary suites.

Airbnb Canada's public policy manager, Alex Dagg, said the typical Airbnb host with a secondary suite rents it out for only three months a year, and would not otherwise put it on the long-term rental market. For the rest of the year, older children or grandparents tend to live in them, Ms. Dagg said, noting that just a small number, around 700 such suites, were listed on Airbnb in Toronto.

"We get that there's a housing crisis in Toronto, but don't punish people in their primary homes," Ms. Dagg told reporters. "They didn't cause the housing crisis in this city. They are struggling to make ends meet like everyone else."

Thorben Wieditz, a spokesman for FairBnb, a campaign backed by the hotel industry and its main union that is pushing for stricter rules on short-term rentals, called Wednesday's vote a victory for renters: "It's hard to believe," Mr. Wieditz said. "There's still a possibility that council will vote against it … but we are very encouraged."

Limiting Airbnb to primary residences is meant to put an end to the growing number of commercial short-term rental operators, some with multiple units, who are blamed for creating disruptive "ghost hotels" in some condo towers and neighbourhoods and sucking too many units out of the long-term rental market.

Based on Airbnb numbers, city staff estimate that 3,200 of 10,800 Toronto properties listed on the service in 2016 were not principal residences. (Including other similar online services, city bureaucrats estimate that as many as 20,000 units are listed for short-term rentals.)

The city's analysis says if even half of the soon-to-be illegal Airbnb listings are returned to the long-term rental market, it could make a difference to the city's low vacancy rate.

The rules would force Airbnb-type hosts to register with the city, pay a $50 annual fee and keep records. Entire homes could not be rented out for more than 180 nights a year, but when the homeowner is present, there would be no limit for up to three rooms.

Online platforms such as Airbnb would have to pay a $5,000 fee for a license and a $1-a-night tax for each booking. They would also have to ensure every listing on their platforms has a valid registration number and develop procedures to "mitigate neighbourhood nuisances" such as noise.

When the committee came to vote on the whole package of rules, councillor Gord Perks, who represents the rapidly gentrifying area of Parkdale, was the only one to oppose it, arguing that the conversion of units to Airbnb was driving poor tenants out of their homes. He slammed the use of the term "home sharing," arguing the so-called sharing economy consists of companies that routinely skirt the law.

"These guys are not innovators," Mr. Perks said. "They are just pirates." 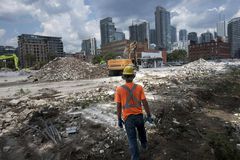