Toronto's deputy mayor says he is "exploring" whether to call in the army, with the city facing a lengthy and costly cleanup after an ice storm that knocked out power to 300,000 homes and other buildings.

Norm Kelly said extra hands could be needed to get rid of fallen trees, branches and other debris as the scale of the task ahead becomes clear – on Thursday, the city said cleanup will cost $75-million and take up to eight weeks.

The notion of calling in the army was raised among city staff early in the ice storm response, Mr. Kelly said. "And it was met with guffaws because people remember Mel Lastman moving around town in an armoured carrier," he told The Globe and Mail, referring to the former mayor's 1999 decision to call in the army to battle a snowstorm.

But as cleanup cost figures were made public Thursday, Mr. Kelly – who was handed extra powers when council stripped Mayor Rob Ford of some of his roles – asked his staff to explore how they'd make a request for soldiers.

"It's just [a question of] manpower. It's just, if we can get a lot of guys here and we can get into neighbourhoods and just say, 'Hey, can we give you a hand and get that stuff out?' … I'm not sure technically how the army and its reserves could fit into that, so it's something I'm exploring," he said.

The ice storm struck the weekend before Christmas, knocking out power in homes across Ontario, Quebec, New Brunswick and Nova Scotia. The City of Toronto was worst-hit – at one point, 300,000 homes and buildings were without power, affecting an estimated 750,000 people. Crews expect to reconnect the final homes this week.

Any request for troops would technically have to go through the province – though that would likely be a formality – and then relayed to Ottawa. Craig MacBride, a spokesman for Ontario's Minister of Community Safety and Correctional Services, declined to speculate on a request the city hasn't yet made.

If the province asked for soldiers, Public Safety Canada said in a statement Thursday it "would work together to determine if federal assistance is required." Geneviève Breton, communications director for Defence Minister Rob Nicholson, declined to speculate on whether soldiers would be sent, saying only the province would first have to make the request.

The ice storm response has raised questions about who is in charge at Toronto City Hall. Ontario Premier Kathleen Wynne dealt solely with Mr. Kelly, to whom council has handed many of the day-to-day roles previously filled by Mr. Ford. But Mr. Ford retained the power to declare a state of emergency – and didn't, saying it was unnecessary, though Mr. Kelly disagreed. As such, it's unclear who would call in the army.

Asked who is in charge, Mr. Kelly said: "Well, in charge – if you mean, by that, who's monitoring the situation, who's asking the questions, and giving advice? I would argue it was the office of the deputy mayor. But, you know, there's another aspect to it, and that's the public face. And the mayor did a very good job of focusing people's attention through his press conferences."

The cleanup will cost $75-million, take up to eight weeks, and require 600 city staff working seven-day weeks, said Councillor Denzil Minnan-Wong, chair of the public works and infrastructure committee. It's the "incredible" scale that has Mr. Kelly considering asking for the army's help.

"The people were impatient after three or four days. It's going to be very awkward to say to people, well, you're going to have to wait eight weeks," he said.

He asked an employee on Thursday to sort out how a request for soldiers could be made. "We haven't had any feedback yet," he said Thursday afternoon.

City cleanup crews will include three-person teams clearing debris from roadsides, while two-person forestry teams will work to clear hanging tree limbs. At a news conference on Thursday, Mr. Ford said the cleanup is the next phase of storm response. "This is a major effort," he said. The city will deal with trees on public land and clear branches up to six inches in diameter left on the curbs at private homes. For branches larger than that, residents must hire a private contractor.

City officials were unable to estimate the total damage to Toronto's tree canopy, but Mr. Kelly did say the damage could threaten the city's environmental goals. "This is a real setback to the environmental initiatives of the City of Toronto because one of our primary goals is to grow the canopy," Mr. Kelly said.

With a report from Kaitlyn McGrath in Toronto

How did you cope with the ice storm and power outages? Share your story here. 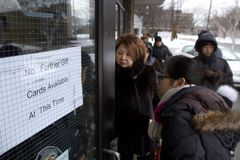 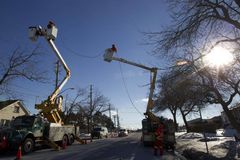 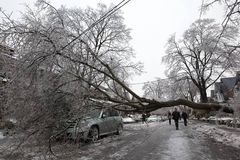 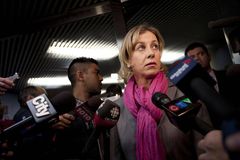 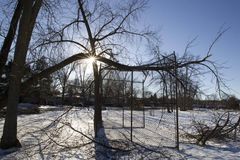 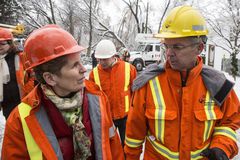