Employees of the Favor food delivery service didn't see it coming. "So, I just woke up to this," one former staffer posted on Twitter on Dec. 5.

The tweet was prompted by a message from Favor – operationally based in the U.S. – informing employees and patrons that their first Canadian location would be ceasing operations immediately.

In an instant, an estimated 200 Toronto delivery runners were unemployed.

For the swollen cohort of on-demand food delivery companies in Toronto, it's been a tumultuous year. It began with an abundance of similar businesses cropping up on the market, each building business plans around technologically savvy platforms. But the Toronto market for their services couldn't sustain the influx of delivery companies, resulting in a wave of closures and fee-alterations.

Parking, traffic and restaurant wait-times were listed as reasons for Favor's closure. It also came after the company imposed a new model for fees during peak hours or bad weather – depending on the severity of the circumstance, a delivery fee could jump from a base of $6 to as high as $18.

These are tough days in the industry. Two days prior to Favor's closing, around 30 employees of the competing UberEats delivery business protested outside the company's Toronto headquarters, arguing that a change in delivery fees made it nearly impossible for full-time drivers to support themselves financially.

According to Uber Canada spokesperson Susie Health, the new delivery fee schedule boost was introduced based on where deliveries are taken, and delivery fees have been broken down into a pickup fee, a drop off fee and a distance fee.

"Maximizing delivery partner earnings is a priority and we will continue to work to ensure a competitive income for all our partners," she wrote.

UberEats, which began in Toronto in May, 2015, also closed its instant-service operations on Oct. 3 – it promised to deliver preselected lunch options in Toronto within 10 minutes.

"We started with speed and a limited selection of menu items," Health said. "Today, UberEats has significantly expanded."

Another Toronto service, the east end-based Feast, differentiated itself by making its own meal options. Feast ceased its on-demand delivery on Oct. 21 – but is continuing to pursue options to use its technology platform in other ways.

"We're looking into some next-generation vending machines from Europe," said Feast CEO Steve Harmer, adding that the technology for on-demand delivery wouldn't go to waste. "You can still be able to look at inventory from your desk, place your order, and the [vending] machine will hold your meal for you."

Feast built a model, he said, with certain assumptions around growth and scale – which simply weren't met. Throughout its 10 months in Toronto, Feast ran an average delivery time of 11 minutes, which he said translated to a "relatively cost-effective" model. However, the most common meal for on-demand delivery downtown was lunch, which meant average meal sizes were small, so customers weren't paying much per order.

"Our average order size ended up being about $14 and our average cost to deliver that item was $6.60," he said. Services like UberEats would be paying even more, he said.

The only solution is increasing what Harmer called "meal density" – orders per hour per kilometre – which just wasn't possible for Feast. "The demand wasn't as intense as we needed it to be," he conceded. "We just couldn't get over the cost to deliver."

The rise of the instant-delivery lunch
June 5, 2017
Home meal-delivery service? I'd take restaurant takeout instead any day
May 16, 2018 Toronto bike courier Kevin Sutton on delivering food to your door for Foodora
May 16, 2018 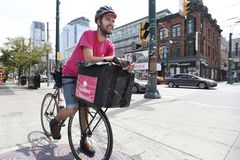