Police are investigating the fatal daylight shooting of a man on a busy downtown Toronto street on Monday.

"A lot of people witnessed this," said Constable Jenifferjit Sidhu. "The next thing the people in the area noticed is that there was a man lying unconscious and not breathing and somebody fleeing the area."

Jody White, who lives in a condo across the street, said he was lying on his couch when he heard a volley of about eight or nine loud bangs followed by a pause before the shooting began again.

"I jumped up and I looked out the window and directly below on the street I saw a guy standing over another guy just shooting. A guy was face down on the sidewalk and the guy was just emptying his gun into his back," said Mr. White, a vice-president of a tech start-up who was home sick on Monday.

Mr. White, who lives on the 13th floor, ran outside and checked the victim for a pulse, but couldn't find one. He said other witnesses were standing nearby and appeared to be in shock.

"Just by looking at the guy, I was like there's no way this guy's going to make it. He's just full of holes and there was blood everywhere."

The shooter fled in a vehicle driven by someone else, Mr. White said.

Sergeant Craig Somers told a news conference at the scene that two semi-automatic handguns were recovered and it's not known if the dead person was the intended victim.

George Brown College, whose St. James campus is near the site of the shooting, temporarily implemented a hold-and-secure order asking people to remain inside. 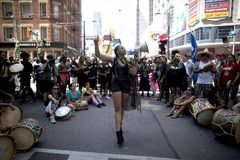 Teen who sparked Toronto's Danzig St. shooting sentenced to life in prison
December 7, 2016
Toronto police chief says he has new strategy to combat gun violence
January 20, 2017
Follow Jill Mahoney on Twitter @jillsmahoney
Report an error Editorial code of conduct
Due to technical reasons, we have temporarily removed commenting from our articles. We hope to have this fixed soon. Thank you for your patience. If you are looking to give feedback on our new site, please send it along to feedback@globeandmail.com. If you want to write a letter to the editor, please forward to letters@globeandmail.com.
Comments are closed