In a major policy reversal, Toronto Mayor John Tory will make a controversial pitch to impose tolls on the Gardiner Expressway and Don Valley Parkway as a way for the cash-strapped city to pay for roads and public transit.

Senior city-hall sources told The Globe and Mail the mayor will outline his plans for the tolls and other measures, which include a hotel-room tax but not a selloff of Toronto Hydro, in a lunch-hour speech at the Toronto Region Board of Trade on Thursday. A report from city finance staff presenting options for new ways to raise revenue and shore up the city's shaky finances is to be unveiled in the morning.

Marcus Gee: Tory's road toll is bold, risky – and should be applauded by Toronto

The city has been studying and debating road tolls – common around the world – for years. But until now, Mr. Tory has been opposed or at least lukewarm. During his 2003 mayoral campaign against David Miller, he organized a roadside anti-toll protest when Mr. Miller mused about the idea. Earlier this year, as the city commissioned a study on tolling the two expressways, his office said in a statement it was not his "preferred" policy.

His speech on Thursday will outline a proposal to charge drivers who use the Don Valley Parkway or Gardiner Expressway about $2, potentially raising $150-million to $200-million a year, a lot of it from drivers who live outside Toronto and do not pay property taxes in the city.

The money would go to public transit and roads, including the upkeep of the two expressways, a source said. Council must approve the plan, and the city would have to ask permission from Queen's Park to impose tolls. The Liberal government of Kathleen Wynne is likely to be receptive to the idea, as the Premier is keen to invest in public transit and has said municipalities must be treated as "mature" governments that can make their own decisions. Her government is running a pilot project on a short stretch of tolled express lanes on the Queen Elizabeth Way.

The push for tolls is likely to overshadow the other elements of the mayor's plan, which include a per-room hotel tax that previous city estimates said could bring in more than $50-million a year. The city must also get permission from Queen's Park for this. Mr. Tory will also say the province should repeal a property-tax rebate program for vacant storefronts, which Toronto and other municipalities have been demanding for years and would boost city revenues.

And he will put to rest speculation that he will call for a portion of Toronto Hydro to be sold. Instead, sources say, Mr. Tory will announce that provincial rule changes now allow the city to invest some of its own $5-billion in reserve funds in the utility, providing Toronto Hydro with new capital to help upgrade the electricity grid without the need for privatization. That move could also bring the city's dividends from Toronto Hydro, which the utility slashed from $56-million down to $25-million, back to higher levels.

This decision prevents a major political battle for Mr. Tory, as even a partial selloff of Toronto Hydro would encounter a rough ride at council, particularly given the unpopularity of the provincial government's partial selloff of Hydro One and mounting controversy over rising electricity bills.

The mayor may have enough of a fight on his hands over tolls. But some suggest opposition to the idea is softening.

While long controversial around city hall, some polls suggest the idea is less unpopular with the voters than with Toronto's politicians. And in a week when transit riders were told they have to bear the sixth annual fare increase in a row, Mr. Tory may want to show that the city's financial burden is being shared more broadly.

The city faces a $528-million gap in its projected 2017 budget. Mr. Tory has promised not to raise residential property taxes above the rate of inflation, leaving the city searching for other sources of revenue, and for cuts to city services.

The province's City of Toronto Act provided new taxing powers in 2006, including potential taxes on booze and tobacco. But the city has deemed most would be too expensive to collect or politically toxic. It cannot bring in general sales or income taxes without changes in provincial legislation.

In 2007, when Mr. Miller was mayor, the city adopted its own land-transfer tax on top of a similar provincial tax, which has raised hundreds of millions thanks to Toronto's runaway real estate market.

But city manager Peter Wallace has warned that Toronto has grown too dependent on those revenues, and is vulnerable to a shock if the market crashes. (Mr. Miller also brought in a $60 fee for driver's licence renewals, but council repealed it under anti-tax mayor Rob Ford.) Many experts in municipal finance have long said Toronto should reduce its reliance on property taxes, noting that many other large cities around the world have a wider array of levies and fees, including income and sales taxes.

With reports from Oliver Moore and Adrian Morrow

With reports from Oliver Moore and Adrian Morrow 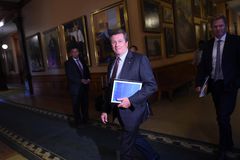 Toronto mayor calls for end to Expo 2025 bid, prioritizing transit and public housing
October 26, 2016
Follow Jeff Gray on Twitter @jeffreybgray
Report an error Editorial code of conduct
Due to technical reasons, we have temporarily removed commenting from our articles. We hope to have this fixed soon. Thank you for your patience. If you are looking to give feedback on our new site, please send it along to feedback@globeandmail.com. If you want to write a letter to the editor, please forward to letters@globeandmail.com.
Comments