Toronto Mayor Rob Ford facilitated a meeting between city water officials and a cosmetics company that was under investigation for alleged problems with its sewage discharge – a company with which the Ford family has had a relationship through its label business, Deco Labels and Tags.

In mid-August, Mayor Ford's office asked Toronto Water's top bureaucrat, Lou Di Gironimo, to attend a meeting at the cosmetics factory, Apollo Health and Beauty Care – a meeting that was also attended by both the mayor and his brother, Councillor Doug Ford. "They participated from the standpoint of being kind of like a broker for a new company – a large new employer in the city," Mr. Di Gironimo said.

At the Aug. 15 meeting, there was no mention that the Ford brothers' family business has had a commercial relationship with Apollo, Mr. Di Gironimo said. For about a year, the beauty products company has turned to the Fords' business, Deco, for a portion of its label needs, industry insiders have said in interviews.

In an e-mail, a spokesman for the mayor said that Mayor Ford was contacted by Apollo to set up the meeting, which he helped facilitate as part of his commitment to "customer service excellence" for constituents. "The mayor's family business played no part in this meeting. The mayor will not speak to the issue of his family business," the mayor's spokesman, George Christopoulos, said in the e-mail.

Mr. Di Gironimo said that the mayor and councillor encouraged Apollo to work with the city. He also said that it was rare for him, as the head of Toronto Water, to get actively involved in an investigation at such an early stage, but because the alleged effluent spilled out into the environment and because his attendance was requested by the mayor, he felt compelled to attend the meeting.

Councillor Ford declined to answer any questions about his relationship with Apollo, which is not in his ward, saying, "I don't discuss clients." He said that he objected to The Globe and Mail making a number of inquiries about Deco's affairs and promised to criticize the newspaper on his weekly radio show. "When you call suppliers? When you call our competitors? When you call our customers? Is this journalism?"

There is no suggestion that the brothers are in violation of the Municipal Conflict of Interest Act, because it only applies to votes and speeches at council and not the regular day-to-day duties of councillors outside of chambers.

Since taking office, though, Mayor Ford has been accused repeatedly of blurring the lines between his personal affairs and his official activities as mayor – and on several occasions he has called on city staff, including some of Toronto's most powerful bureaucrats, to involve themselves in matters that affect him personally.

Most famously, he has been embroiled in a conflict-of-interest allegation that has gone all the way to an Ontario Superior Court judge, Mr. Justice Charles Hackland, who is expected to make a ruling about the mayor's conduct on Monday. In that instance, a private citizen has alleged that the mayor violated the Municipal Conflict of Interest Act when he spoke and voted at a council debate regarding donations made to the mayor's football charity.

In September, it was revealed that some of Mayor Ford's office staffers – including former university-level football players – regularly accompany him to practices and games played by the high-school football team he coaches. In July, Mayor Ford had meetings with staff, including one with two of the city's highest-ranking executives, that sent them scrambling to clean up the area around his family's label business in advance of its 50th-anniversary party, requests that included removing a backhoe from privately owned land, digging culverts and repaving the road.

Most recently, after Toronto police officers called for two TTC buses following a testy football game between Mr. Ford's team and another high school, the chief executive of the TTC made a public request that the mayor stop calling his cellphone when he has personal problems with bus service.

As for the investigation into Apollo's discharge, the city learned about the spill after someone reported that foam was surfacing from a manhole in a valley in Earl Bales Park, which is separated from Apollo by about five kilometres of sewer pipes, Mr. Di Gironimo said. He said that city workers traced the foam through the sewer system back to the factory, which only has been in operation for several months.

He stressed that, unlike a criminal investigation, a probe by Toronto Water isn't necessarily adversarial; inspectors work with companies, especially ones like Apollo that are new to Toronto, to educate them about the city's sewer bylaws and help them become compliant.

"There are certain cases where we have not seen that level of co-operation, and we do have the right to charge a company, and then we take them to court," Mr. Di Gironimo said. In 2011, the city started 51 investigations and prosecuted 48 alleged bylaw offenders, according to the department's annual report.

The August meeting at Apollo is not the only time that the Ford brothers, acting in their official capacity as mayor and councillor, have interacted with the company, which manufactures private-label soaps and shampoos for major retailers.

In June, two months before Apollo's alleged sewage problems, Mayor Ford and Councillor Ford appeared alongside Apollo's owners, twin bothers Richard and Charles Wachsberg, at the company's grand opening. (The company used to operate in Vaughan, but began its move to Toronto in the years before Mayor Ford and Councillor Ford came to office.) The mayor presented the Wachsbergs with a framed certificate and, along with Councillor Ford, mugged for a photo that the mayor's staff later released on Twitter.

Two phone calls and a letter sent to Apollo chairman Richard Wachsberg were not returned. Although Mr. Di Gironimo agreed to two interviews about the probe and the meeting at Apollo, the city has denied the release of any records about the August meeting under a freedom-of-information request, saying the information contained in the records could interfere with the department's investigation.

As a private company, the clients and business of Deco Labels and Tags are considered proprietary information. There are no laws that require Mayor Ford or Councillor Ford to disclose their clients.

Last year, Mr. Justice Douglas Cunningham recommended that the Municipal Conflict of Interest Act be expanded to include other activities by councillors.

In his final report following the inquiry into Mississauga Mayor Hazel McCallion, which focused on a conflict-of-interest case involving her and her son, Judge Cunningham wrote that the law should be strengthened "so that it clearly applies to all meetings attended by members of council in their official capacities."

Picturing a Toronto without Ford
May 9, 2018 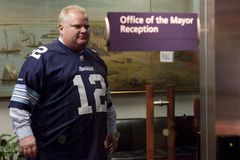 Judge rules on Ford’s conflict-of-interest case on Monday
May 9, 2018

Council’s closed-door session in dispute as Ford case falls to judge
May 9, 2018