Nigerian-born Thompson Egbo-Egbo is often described as "the face of Dixon Hall Music School," which in the last 35 years has provided low-cost music lessons to 5,000 youngsters from Regent Park, Moss Park and the St. Lawrence Market neighbourhood. Pianist, composer, arranger, performer, educator, role model, Mr. Egbo-Egbo is not altogether comfortable with being the face of anything – but at 29, he remains unhesitatingly supportive of the school he first attended at age 5. He's honorary chair of the annual Dixon Hall fundraiser occurring Nov. 25 at Daniels Spectrum, where he'll give a speech and premiere an original composition for piano and cello titled Yesterday Was Today.

What's your speech going to be about?

I think there's going to be a lot of thank yous because I owe so much to so many people. But it's going to be centred around what I think is the importance of investing in social infrastructure, how programs like this [music school] do make a difference and are important to the cultural growth of the city.

You came to Toronto with your mother and younger sister when you were 4 and went to Dixon a year later. Did your mom take you there?

My mom says when I got to school here after being in Nigeria, I was quite the troublemaker. Still am. I'd get my kindergarten work done and then afterwards I'd just goof off. The school [now Nelson Mandela Park Public School] would call "come get your kid; he's always causing trouble." Some lady came up to my mother when she was sitting in the hall and suggested, "Well, maybe Thompson needs something to distract him. There's a music school around the corner. Why don't you try that out?" So my mom brought me and while she was talking to the instructor they put me in a studio to wait. There was a piano there. I started to play. I really took to it.

[After high school, Mr. Egbo-Egbo studied jazz performance at Humber College, then enrolled in Boston's famous Berklee School of Music where he majored in electronic production and sound design. Through his own eponymous charitable foundation, he went on to create "a composition program that didn't require instruments" for underprivileged youth in the Jane-Finch neighbourhood.]

What I did was this thing where we incorporated poetry and rhythm and song so the kids would be able to tell their stories to music without having instruments. People get stuck on the idea of having resources but it's more important to be resourceful. Just because you don't have resources – like instruments – doesn't mean nothing can be done. More recently, I've been running these two iPad music ensembles at Daniels Spectrum. Kids use a program called iMaschine, and with it they're able to replicate beats so what we do is get them to take their favourite songs and recreate them.

You were the music director of the Canadian production of Da Kink in My Hair that had more than 20 performances in London in 2006. You finished your last Berklee semester in August, 2012. Do you think you'll stay in Toronto?

I have no plans to stay and no plans to go. The biggest area I'd love to see increase while I'm here is the outreach, the foundation stuff. I don't necessarily want to do something different. I want to fill real needs that are there as opposed to setting something up because I can and pat myself on the back.

Youth outreach glows at fire academy
February 28, 2000
Helping at-risk kids get back in the saddle
November 22, 2013 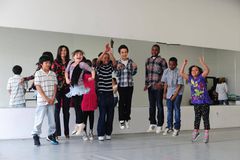 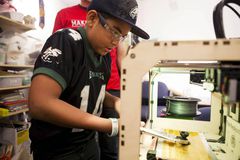