The development and promotion of the Toronto 2015 Pan Am Games mascot has cost taxpayers $383,045 – and counting.

A Freedom of Information request filed by The Globe and Mail returned a spreadsheet of expenditures that spanned more than two-and-a-half years, covering everything from $26,862 for promotional stickers to $5,000 to license a song used as Pachi the Porcupine’s theme music. The largest expenditure was $134,550 to cover the wages of the part-time performers who wear the Pachi costume (there are 17 of them) and others who make up Pachi’s entourage during public events. 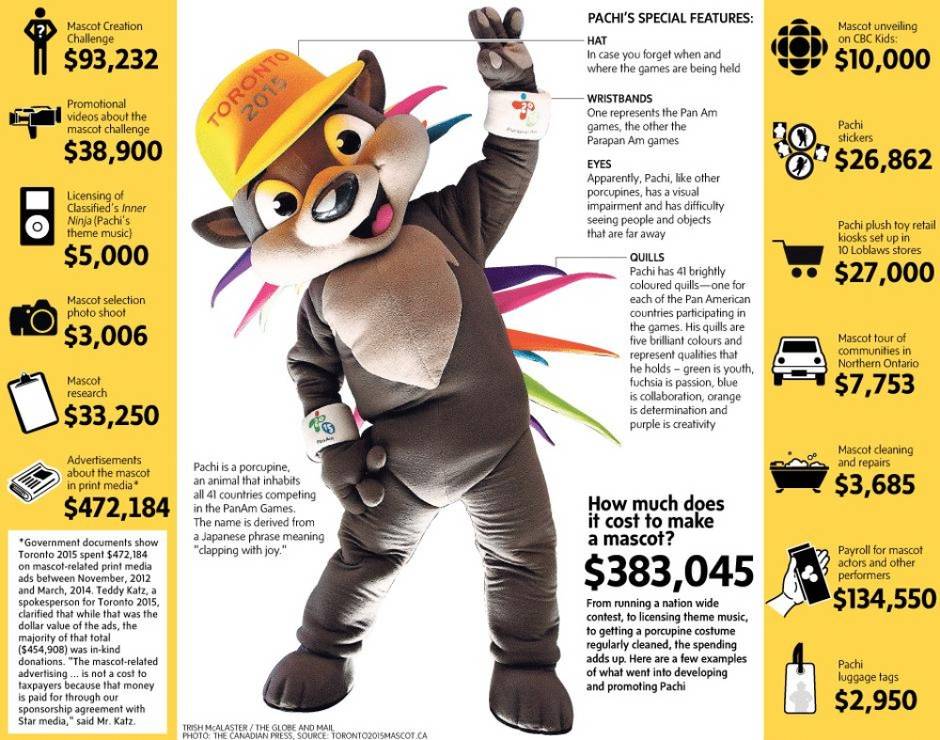 Instead of outsourcing the task of creating a mascot for the Pan Am Games to an ad agency, the Toronto 2015 organizing committee turned to a younger set of creatives: the 16-and-under crowd. Youth entered their ideas into a nationwide mascot contest in 2013, and six finalists were chosen out of 4,100 submissions. The winning entry was the brainchild of four Grade 8 students from Markham, Ont. Still, the organizing committee spent $33,250 on “mascot research” in early 2013. In part, this involved “qualitative surveys and informal focus groups with a wide variety of our stakeholders” to select the finalists, explained Teddy Katz, a spokesperson for the games, in an e-mail.

Next to the host city itself, mascots are the only other thing that differentiates recurring amateur sporting events such as the Pan Am Games, the Commonwealth Games or the Olympic Games from previous ones. When the one-eyed London 2012 Olympic Games mascots, Wenlock and Mandeville, were unveiled, organizers had to explain their origin story to a very confused public (the alien-like creatures were apparently made from droplets of the steel used to construct the Olympic stadium). They were designed by London firm Iris for “a few thousand pounds,” The Guardian reported.

Beyond serving as a marketing tool to raise awareness of the Games before they start, mascots also offer up merchandising opportunities. Even during the 2009 recession, when the retail sector was suffering losses across the board, the Vancouver Organizing Committee for the 2010 Winter Olympics generated millions in sales of Olympics merchandise a year before the Games even began. One-quarter came from mascot-related products, including plush versions of Quatchi, Sumi and Miga – the animal mascots designed by Canadian-American firm Meomi Design. Plush figures of the mascot for the 2014 Commonwealth Games in Glasgow, an anthropomorphic thistle named Clyde designed by a 12-year-old, proved to be the most popular merchandise of the games.

Development and promotion of Pachi has been one of several spending priorities for the Pan Am Games, Mr. Katz said. With the Games still more than half a year away, Pachi has made more than 1,000 appearances at events in Ontario, including more than 200 schools and children’s camps.