Since Friday evening, Mike Lee hasn't been able to shake off the distinct crack of a plunging tree branch and, minutes later, a woman's anguished cries.

Mr. Lee, 36, was lounging at Trinity Bellwoods Park at about 7:15 p.m. when the sound of a crack tore through the park. He ran to the nearby crowd that had gathered around a splintered tree branch and a 30-year-old man lying next to it on the grass.

Mr. Lee pushed past the crowd and kneeled beside the man. He checked the man's pulse and noted shallow breaths. The man stared at the sky, his pupils dilated, and moaned several times in pain, Mr. Lee said.

For two minutes, Mr. Lee and two other bystanders performed chest compressions and mouth-to-mouth resuscitation on the man. First responders then took over, and by 7:30 p.m. pronounced the man dead. When told the news, Mr. Lee said the wife screamed and rushed to her husband's body, covered in a tarp, before responders walked her back to the ambulance.

"I'll never forget that sound," Mr. Lee said. "She came out a few minutes later absolutely in shock, completely calm. She walked over and picked up something and then went back into the ambulance. It was surreal."

Toronto parks officials are still investigating after the branch killed the 30-year-old French man, who was sitting beside his pregnant wife when it fell. Mayor John Tory told reporters on Monday that the city would "leave no stone unturned to ensure the public is safe."

He extended his condolences to the family of the victim of what he called a "tragic accident." Mr. Tory would not speculate on the cause or on any liability the city could face.

"My thoughts are with the family right at this point in time. And the investigation and the report will lead to whatever conclusions, both legal and otherwise," he said.

Over the weekend, the city's parks department determined the tree was in good health, besides some dead branches pruned by city workers. The tree, a Siberian elm, is one of 19 species susceptible to a bizarre phenomenon called "summer branch drop," which sees large branches drop from otherwise healthy trees, even in the absence of high winds.

Andrew Baughn, an arborist ceritified with the International Society of Arboriculture, called on the city to improve its inspections after he and his son were nearly hit by a falling tree near a playground at Trinity Bellwoods last June.

But in a legal battle, a court would require specific evidence that would indicate the tree in question was faulty, said Denise Réaume, a professor of law at the University of Toronto.

"General opinions…don't count for anything," she said. "What was going on with this tree, whether there was anything to suspect that something was wrong, when the tree was last inspected – those are the kinds of questions that a court will be asking."

The victim and his wife were French citizens both in Canada on work permits, police said. The French consulate in Toronto said Monday that it's been in contact with the victim's family and is assisting them with the authorities.

Meanwhile, Mr. Lee, the co-founder of a tech startup, has launched a campaign to raise $20,000 for the victim's wife and family. Mr. Lee has not spoken to the wife or the victim's family, but said he's asked Toronto police for their assistance.

"I just can't get it out of my head," Mr. Lee said. "You could have been mid-sentence saying, 'I love you.' Then a tree branch falls from the sky and takes you away. I just cannot fathom how that must feel for her."

‘Summer branch drop’ may have caused death of man in Toronto park
June 19, 2016 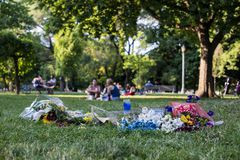 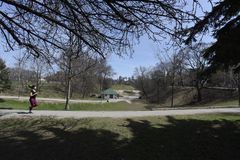