The Toronto police officer who is being investigated in the killing of a knife-wielding teenager on an empty streetcar called for a taser before opening fire, according to a source.

Constable James Forcillo requested assistance from an officer with a taser before allegedly shooting Sammy Yatim, 18. In Toronto, only sergeants and members of the Emergency Task Force are permitted to carry tasers.

The stun gun appears to have arrived a few minutes too late.

The shooting – which was captured in several videos that have since gone viral – has elicited widespread public concern about police actions. Mr. Yatim's death is being probed by the Special Investigations Unit and Toronto Police Chief Bill Blair. Ontario ombudsman André Marin is also reviewing the matter.

Constable Forcillo has been suspended with pay. His lawyer, Peter Brauti, warned that the full picture of what happened has not yet emerged.

"People have to take a bit of a deep breath before they pass judgment on this officer and wait until all the evidence comes out," he said.

On the streetcar, Mr. Yatim had brandished a knife before first ordering everyone to stay on the vehicle and then, moments later, yelling at them to get off. The incident happened early Saturday morning on Dundas Street West near Trinity Bellwoods Park, on the western side of the downtown core.

After police arrived, video recordings suggest the confrontation escalated quickly. Officers ordered Mr. Yatim, who swore at them, to drop his knife before warning him not to move. After the teen appeared to have taken a step forward, the first volley of gunshots rang out.

"He's obviously devastated. The incident's tragic. He and his family are having a very tough time of it," Mr. McCormack said. "Ever since his name has been published, there have been people posting things on Facebook, all kinds of stuff, threats against him."

A posting on a website for a Toronto gym co-founded by a James Forcillo, who was in Grade 12 in 1999, says he was a football player who planned to study law enforcement at college.

Victoria Forcillo, an aunt who lives in Montreal, said she hasn't seen James since his mother's funeral in 2001. 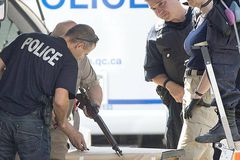