Police have arrested a 25-year-old man in connection with a shooting in Toronto's Chinatown neighbourhood last month that left two people dead and three others wounded.

Chief Mark Saunders says Kyle Sparks-MacKinnon, from Toronto, has been charged with two counts of second-degree murder and three counts of attempted murder in the shooting on Jan. 31.

Saunders says the arrest was directly related to help from the public after police released security images of potential suspects.

Police have said David Eminess, 26, and Quinn Taylor, 29, both from Toronto, were out with another friend when they went to look for food around 3 a.m. that morning.

They say an altercation ensued and shots rang out, hitting Eminess, Taylor, along with their friend and two innocent bystanders.

Saunders says the three that were injured have since been released from hospital as they continue their recovery. 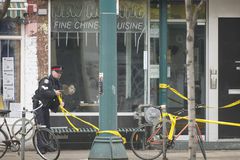