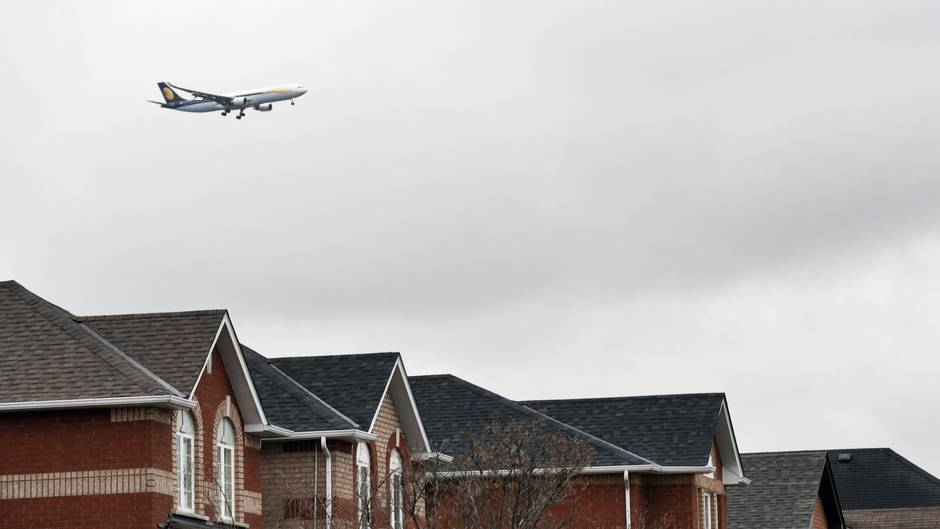 In 2012, Nav Canada shifted a key approach into Pearson airport and condensed flight traffic over a smaller area, changes which have been fought by local activist groups. (Photos by Fred Lum for The Globe and Mail)

Margaret Evans cherished the quiet in Davisville Village, a midtown Toronto neighbourhood where many homes date to nearly a century ago. But her peace has fallen victim to the “screech” of jets overhead – hundreds of times a day – after changes were made to the way planes fly into Pearson International Airport.

The shift moved a key approach to Pearson and condensed flight traffic over a smaller area. The result, according to Ms. Evans, a founding co-chair of the Toronto Aviation Noise Group (TANG), was that she had 86,000 planes over her area in the first year after the changes were put in place in 2012.

Now, after four years with the new system, the activists are concerned about even more noise as the airport’s booming growth continues. They are worried that the organization overseeing the flight paths – which rules out changing routes because of noise complaints – will not act without government intervention. And reinvigorated by the newly elected federal Liberals, they are taking their fight to Ottawa.

“Those of us affected by the changes that Nav Canada put in place in 2012 are ridiculously disproportionately affected by this,” Ms. Evans argued. “We all expect to have planes, we are not NIMBYs, … but [that many] is ridiculous in what were previously quiet residential neighbourhoods with low ambient noise.”

The hot-button term NIMBY often seems at the heart of this issue, with activist groups that have sprung up around the Greater Toronto Area eager to show that they want merely to share the noise while Nav Canada suggests that opponents want to push it onto someone else.

There are also sharply different takes on the scale of the issue. Ms. Evans described the noise as akin to “a missile” while a spokeswoman for Nav Canada said its tests found it to be “moderate,” usually no louder than the human voice.

These are some of the fundamental disagreements that emerge when digging into this issue, a chasm that seems to bode ill for the prospect of the two sides finding common ground. The activists have managed to find the ear of politicians at all three levels, though, and they hope that the federal government will force a solution that closes the gap.

One MP willing to hear their case is Rob Oliphant, elected in Don Valley West as part of the Liberal surge last fall. He is keen to learn more about the issue, noting that while he does not hear a lot of complaints about it from his constituents, those who are bothered seem to be bothered a lot.

“I get it,” he said. “I have sat on my deck and we have timed, sometimes every 30 seconds, sometimes every 60 seconds, you really literally are having a conversation and have to stop, wait, stop, go. Some evenings, … you don’t hear it. So I want to know, are there options?” 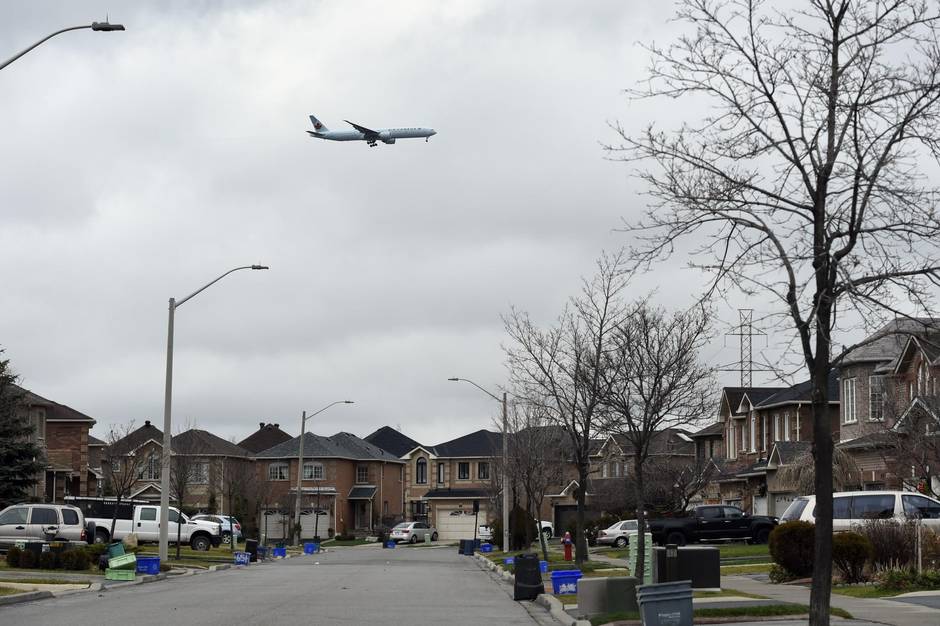 People with Toronto Aviation Noise Group (TANG) say there are two ways to reduce air noise in their neighbourhood: change the way planes approach and spread them around.

Nav Canada presents the 2012 changes as reflecting the way modern navigation works. The result is planes taking a different route toward the most used runways and a reduction in the space over the city in which they are between 3,000 and 6,000 feet – effectively concentrating these aircraft in a smaller area.

People with TANG counter that there are two practical ways to reduce the impact on their neighbourhoods: change the way planes approach and spread them around.

For support, they cite a report from veteran Air Canada pilot David Inch, an effort he undertook on his own time in which he argues that bringing planes in faster and steeper would mean noticeably less the noise for those on the ground.

“We would reduce the point at which noise either wakes people up in the middle of the night or which bothers them when they’re sitting in the backyard,” he said in an interview from his Oakville home, where he hears first-hand the effect of the current approach.

Mr. Inch also maintained that Pearson is out of step with many airports by not having a controller-managed descent, allowing more flexibility if the situation permits. It is a change that he said could be made simply and safely through a NOTAM, a notice to airmen issued to flight crews, once it has been tested.

“The only thing that gives me credibility in all this is just my experience in flying into so many airports around the world … where I’ve seen it done way better,” he said.

Michelle Bishop, the head spokeswoman at Nav Canada, countered that the suggested solutions are simplistic ideas that would not work.

She said that airlines do not want controller-managed descents, which she said would result in lower aircraft anyway, and that she is not aware of an approach to an airport “anywhere in the world” that was designed to spread aircraft volumes around an area.

“Is it more condensed [under the 2012 approach rules] than it was previously? Yes, but that’s how modern aircraft fly,” she said.

“In order to manage [Pearson’s] volume of traffic safely, we need to have standardization of the flight paths. Varying the flight paths … certainly opens up significant possibility of error, of someone having a miscommunication and flying the wrong flight path and having a loss of separation between aircraft.”

Mr. Inch argued that the impasse over how best to do handle the traffic might be solved by having a third party examine the situation, but Ms. Bishop shot back that he simply does not want to believe the agency. 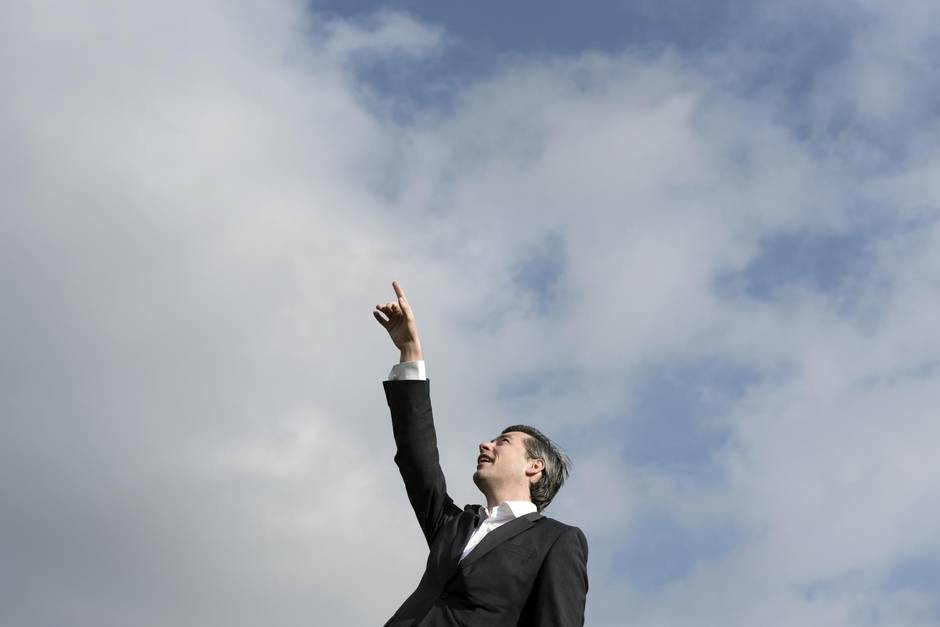 Who is the boss?

Looming behind the debate over noise is the bigger question of who makes the decisions.

A previous federal Liberal government spun off Nav Canada in the 1990s and it operates now as a private body tasked with overseeing the country’s civil air navigation system. It is a structure that has the benefit of preventing politicians from micromanaging hot-button issues such as over which neighbourhoods planes should fly. But it opens the agency up to criticism that it is not properly answerable to the public.

“Even if these planes weren’t flying – you know, 80,000 planes a year over my home – I still am a little offended by the system,” said David Suchon, current co-chair of TANG.

“The fact that we have a company, in Nav Canada, … and it’s accountable to its board, which is the airlines and the other members from the airline industry, [making] decisions about how they’re going to use our airspace, that doesn’t sit right with me.”

In defence of Nav Canada, Ms. Bishop, the spokeswoman, explained that the 15-member board – on which sits the chief executive officer, as well as seven members selected by industry and employees and three by government – includes four people selected by the board itself. Anecdotally, she said, these four typically bring skills that are lacking in the sitting members. And there is an advisory committee to the board to allow for broader input.

In a long interview, she also noted that Nav Canada did public consultations before the 2012 flight-path changes, although it was not then required to do so. She stressed that the agency considers residents near the airport “an important stakeholder.” And she pointed a reporter to the part of its website where it lists its objective of “identifying and, where feasible, introducing measurable benefits which contribute to the reduction of the environmental footprint of the aviation industry.”

In an e-mail, Hillary Marshall, a spokeswoman for the Greater Toronto Airport Authority, which operates Pearson, also detailed the ways it tries to handle the impact of planes. But Ms. Marshall warned that “there are limitations to how you can actually manage aircraft noise in a busy, heavily populated city.”

None of this satisfies the critics, who say Nav Canada’s role in managing the safe and efficient use of the skies gives short shrift to those on the ground. Mr. Suchon argued that the noise-complaint process can be laborious and thus discourage people, particularly those who believe nothing will change as a result.

It is a fear that turns out to be true.

“Do complaints drive a flight path to be relocated? No,” Ms. Bishop confirmed in the interview, asking rhetorically if the route could move every time someone complained, and how many complaints might be necessary to force action.

A system in which noise complaints are logged but do not bring real change is the sort of stalemate that has activists calling for government intervention.

TANG had some success reaching former transport minister Lisa Raitt and is hoping to sit down with her successor, Marc Garneau. The minister was not available for interview to discuss the issue with The Globe and Mail, but a spokesperson said in an e-mail that Mr. Garneau was “familiarizing himself with this file.”

“It is a very hard nut to crack, and I think it’s going to have to be cracked by the government,” said Ms. Evans, the former TANG co-chair. “In the end, it is a governance issue. Who’s in charge of the skies? Who gets to decide about these things?” 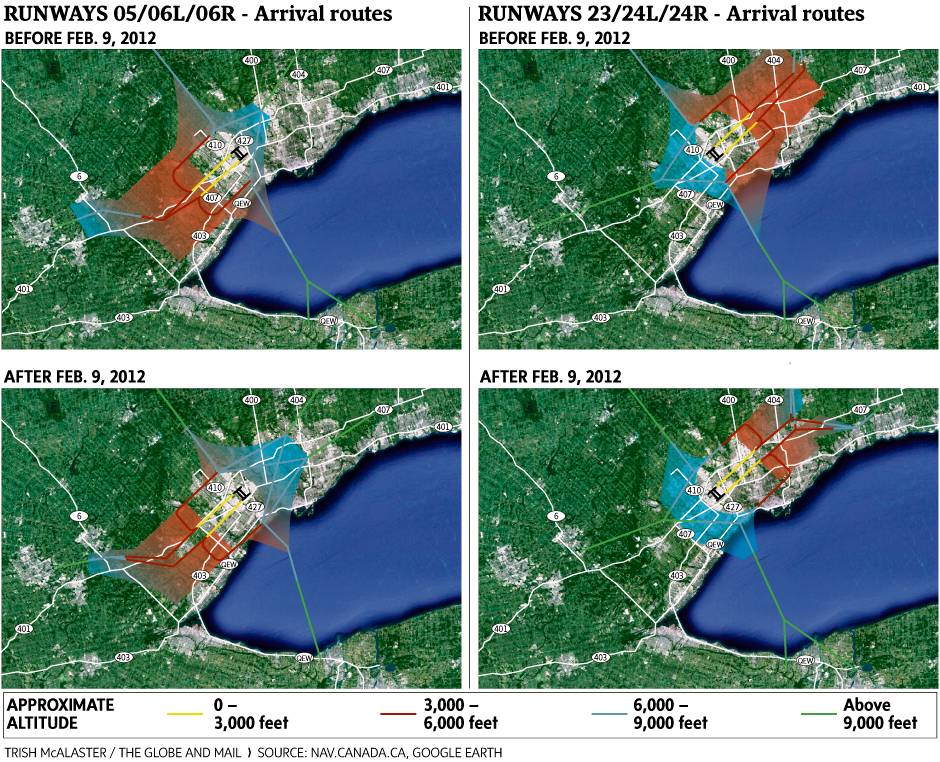