The Toronto District School Board is reviewing the way it maintains its school buildings – including the oversight of routine plumbing, carpentry and repair work – in an effort to curb costs in the face a $3-billion maintenance backlog and a budget crunch that has led to staff cuts.

For years, the board has spent hundreds of thousands of dollars paying skilled tradespeople to do menial work. Those costs include, in the 2011-2012 school year: $161,805.37 to unclog toilets; $84,716.18 to check and adjust thermostats; $33,977.63 to hang photos; and $56,531.76 to replace light bulbs, according to data obtained by The Globe and Mail through a Freedom of Information request. (See a school-by-school breakdown and search for your school here.)

"I'll be very open and say there's room for improvement in all areas across the district on roles and responsibilities, [including] our key managers, our key leads in terms of oversight," director of education Donna Quan said.

She said the reporting structure of the facilities department is changing, and the number of supervising managers is increasing to improve oversight and accountability.

Over the past year, the TDSB has decreased the facilities department's ratio of trades workers to managers – to 40:1 from 60:1 – and begun flagging work orders with inappropriate costs.

Faced with a looming deficit, trustees for Canada's largest school board voted in February to cut nearly 250 high-school teaching jobs, including special education teachers and guidance counsellors. They also cut dozens of educational assistants, office staff and vice-principals, but the board still faces a $23-million shortfall. It will be grappling with its operational budget through June.

To get maintenance jobs done at schools, custodians contact managers at the TDSB's facilities department. These managers, known as family team leaders, consider job descriptions outlined in union contracts, the equipment required and the scale of the task when deciding whether the expertise – and added cost – of a trades worker is needed, according to the TDSB.

Agreements between the unions representing custodians, trades workers and the board list routine duties that should be performed by custodians and those that require the expertise of trades workers. Hanging photos or changing light bulbs, for example, are jobs assigned to custodians under that agreement. But Steve Shaw, a senior manager for the TDSB's facilities services, said that when the scale of the job is larger, trades workers are sometimes brought in.

"While installation of single coat hooks is expected of caretaking staff, installation of large numbers, e.g. a classroom worth, may be done by a carpenter to expedite the work," he said in an e-mail.

In explaining the tens of thousands of dollars the board spends hiring trades workers to change light bulbs, Mr. Shaw said that caretakers don't have the training or equipment to reach fixtures that are more than 10 feet up, in gymnasiums, for example.

Excluding work orders to change light bulbs in gymnasiums, however, still leaves the board spending $46,844.92 in 2011-12, according to the work orders obtained by The Globe. This may include cafeterias, auditoriums and parking lots, according to Mr. Shaw, and some custodians may have to call in trades workers because they are physically unable to do the work and are assigned to "modified duties."

The school board's reluctance to close aging, half-empty school buildings despite declining enrolment is also contributing to the high costs of maintenance work. Many are spending more than $1,000 per student each year for school maintenance work done by trades workers.

The board has closed and sold a handful of underused school buildings over the past four years, and former education director Chris Spence shared plans to review high schools for closings as recently as last fall. Recent scandals, however, including Dr. Spence's resignation over allegations of plagiarism, appear to have put those plans on hold.

Some jobs, such as unclogging toilets and related plumbing, accumulate costs because the work must be done after school, resulting in overtime for the board's approximately 50 staff plumbers – six of whom made Ontario's Sunshine List last year, down from eight the year before, for earning more than $100,000.

Concerns over how the TDSB spends on its facilities prompted the Ontario government in December to appoint a special assistance team to help the board overhaul its operations and commission consultants to review its spending. The consultants issued a scathing report and found millions of dollars in potential savings, but efforts to implement them were stymied in January, when former education minister Laurel Broten renewed hundreds of education sector contracts, including that of the TDSB's union of electricians, plumbers and others who perform routine work at higher costs, the Maintenance and Construction Skilled Trades Council.

Trades council president Jimmy Hazel said that the union has raised concerns that TDSB managers are assigning menial work to his members. The result is that more taxpayer dollars are poured into routine jobs and the union's 580 members are stretched thin trying to put a dent in the board's $3-billion maintenance backlog, he said.

"At the end of the day, we're not in control of that, and there's been no accountability," Mr. Hazel said.

Ms. Quan said that she understood why the ongoing issues would be of particular concern to parents, given recent cuts the board had made to classroom staff.

"That's where our focus should be, ensuring every cent matters directly in the classroom."

This is due to the number of plugged toilets that we have on any given day or during a given year. Any toilets cleared by caretaking staff are not tracked so the actual dollar figure may be higher. Typically the caretaker tries to clear plugged toilets using a plunger. If they cannot clear the obstruction, then they would create a notification. Quite often, clearing the obstruction requires additional work, such as snaking the drain lines, or even removal of the toilet.

In most cases, these are large framed photos, e.g. collage graduation pictures, [which] are quite heavy and may require more than one staff member to install. They require heavy-duty hardware and often must be permanently affixed to walls, to avoid theft, vandalism and students accidentally knocking the picture off the wall causing injury.

Head caretakers do not have training or the equipment to replace lighting that is greater than 10 feet high, e.g. 20 feet up in gyms, so this work is done by trades staff with specialized training.

While installation of single coat hooks is expected of caretaking staff, installation of large numbers, e.g. a classroom worth, may be done by a carpenter to expedite the work. If a repair is required, often a repair of the support board is necessary. 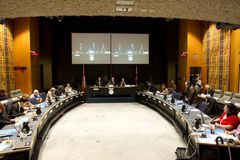 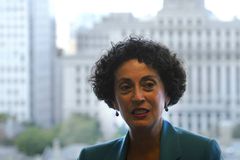 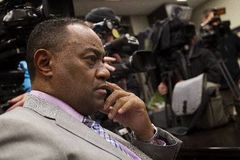 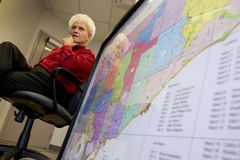 Ontario, TDSB point fingers at each other over trade workers’ contract
January 7, 2013 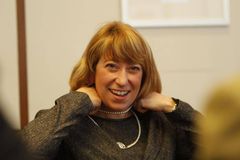