One of the teenaged victims of a double shooting near a Toronto school was a bystander who had gathered with other students to watch a fight, according to his mother.

Zaid Youssef, who had just turned 17, was killed behind an apartment tower across the street from Don Bosco Catholic Secondary School during a lunch-hour dispute on Monday that also claimed the life of a 15-year-old from James Cardinal McGuigan Catholic High School.

"There is a fight so my son he goes to watch what's this fight, like who's fighting," Zaid's distraught mother, Jina Samouie, said in an interview. "Even me and you and everybody, if we find a fight, we're going to go to watch, right? He does not know these people there so they start shooting and everybody starts to run away. … They're shooting him by mistake."

Ms. Samouie said police officers told her that Zaid, her only child, collapsed after trying to flee when gunfire erupted.

The Toronto Catholic District School Board will undertake a formal review to determine if officials could have done anything to help prevent the boys' deaths, said Angela Gauthier, director of education.

Asked about students' claims the fight that sparked the shootings began as a dispute on Twitter, Ms. Gauthier told reporters, "We haven't had time really to delve into those issues, but I'm sure that'll be some of the things we look at." Ms. Gauthier said the board has programs to teach students how to use social media and technology, "but these issues have a life of their own and children have a life outside of school, so we impact as much as we can within a professional setting."

The double shooting comes two weeks after the stabbing death of a teenager at North Albion Collegiate raised fresh questions about student safety.

Investigators, who have not released any suspect descriptions in Monday's shootings, are appealing to anyone with information on the incident to contact police. Officers had not yet publicly identified the victims because family members were still being notified.

A friend of Zaid's said he planned to protect a friend in the fistfight when he was shot.

"He backed his friends up," said Brian O'Connor, 17, who said he was sitting outside the school with Zaid just before he was killed.

Moments after Zaid left school property, the building was locked down. "I'm sad," Brian said. "He was a really easygoing guy."

Zaid, who had recently gotten his driver's licence, celebrated his 17th birthday last Friday and his parents surprised him with a 2007 BMW. Photos of the celebration show the smiling teenager surrounded by family members and friends along with a cake decorated with the car company's logo.

Zaid drove his cherished car to school on Monday and returned a text from his mother letting her know he had arrived safely, she said. Shortly after 2 p.m., Ms. Samouie texted him again and grew worried when he didn't respond to her messages or phone calls. She headed to the school, where police officers told her he was dead.

Ms. Samouie recalled reading passages from the Bible in Arabic to Zaid every night and said he did the sign of the cross first thing when he woke up in the morning.

Zaid, who was in Grade 12 and did well in school, was considering studying law or engineering and had asked his mother for advice the night before he died, she said.

Ms. Samouie said she and her husband, who are from Iraq, came to Canada seeking a better life when Zaid, who was born in Jordan, was six years old.

"I wish I had not come into Canada," she said. "I don't have life after him. … Canada took my son from me. Canada, they killed my son."

The students' deaths became a topic for mayoral candidates on Tuesday.

"We have to do more to support these young people," she said. "We must do more because yes, the crime rate has gone down, but the tragedy, the pain and the suffering for the families of these young men that have been shot is just too much."

John Tory said as a private citizen he has worked with businesses to create jobs for young people and if elected will continue to make that a priority. 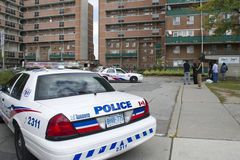 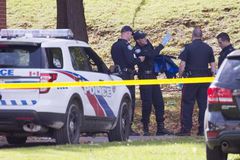 Follow Jill Mahoney and Kate Hammer on Twitter @jillsmahoney @katiehammer
Report an error Editorial code of conduct
Due to technical reasons, we have temporarily removed commenting from our articles. We hope to have this fixed soon. Thank you for your patience. If you are looking to give feedback on our new site, please send it along to feedback@globeandmail.com. If you want to write a letter to the editor, please forward to letters@globeandmail.com.
Comments are closed