When residents at the Carnaby, a condo building on Toronto's Queen Street West, were given their rent notices last month, they expected an increase of about 2 per cent, as per the guideline set by the province's Landlord and Tenant Board last year. Instead, they saw their rents skyrocket – in one case by as much as 30 per cent.

Lisa Beam's rent for her 500-square-foot unit jumped 17 per cent to $1,750 a month. She contacted her unit's property manager, Baytree Real Capital, in disbelief before turning to tenant advocates for advice.

"I finally realized that I didn't have much of a choice in terms of paying it. It was well within their rights to raise my rent that high," said Ms. Beam, a 44-year-old corporate trainer.

The tightening of Toronto's rental market, which has reached record-low vacancy rates, is being felt most acutely by the residents of newly built condos, which are exempt from rent controls. There is no yearly rent cap for properties built after 1991 because of a controversial exemption in the province's Residential Tenancies Act that was designed to spur the development of rental properties. The law accomplished its goal but has drawn the ire of housing advocates who say it has created two classes of renters in Ontario: those who have rights and those who have none.

"You got a tier of renters that are covered under the law who are able to enforce their rights and get stable rent increases that they can try to navigate. And then you have this other tier that have no understanding of what their rents are going to be next year," said Geordie Dent, executive director of the Federation of Metro Tenants' Associations. "That second group? It's growing and it's going to keep growing."

Recent data from Urbanation Inc., a consulting and market research firm that focuses on the GTA's condo market, shows that average rents for condos rose 11.7 per cent in the fourth quarter of 2016 over the same period a year earlier. In the city's core, condos rented for an average of $2,134 a month in the last three months of 2016.

At the same time, Toronto's extremely hot housing market has made it harder to find rental units. First-time buyers who can't afford the rapidly increasing price of single-family homes have been pushed to the condo market, according to an analysis by Canada Mortgage and Housing Corp. The resulting growth in condo prices has encouraged many condo owners to sell rather than rent their units, according to Urbanation, which found rental listings down 8 per cent in the final quarter of last year.

The exemption for homes built after 1991 was originally part of a piece of legislation with roots in the Residential Premises Rent Review Act of 1975, which sanctified rental guidelines and restricted rental increases and evictions. The 1975 law changed over the course of its lifetime and eventually included a rotating five-year adjustment period that gave newly built homes time to find their appropriate market value; after five years, the home would be placed into rental regulation. The rotating exemption was last updated in 1991. Five years later, after Mike Harris and the Progressive Conservative Party came to power, the law was reworked to say that homes built or occupied after Nov. 1, 1991, were not included under rental regulation.

Since then, almost a million housing units have been built in Toronto, according to the city's planning department. Of those, Canada Mortgage and Housing Corp. lists almost a third as condominiums, a majority of which are being used as rental properties.

"The 1991 exemption was to say to any investors big, medium or small that this is what we're going to do as an incentive. The market responded by creating hundreds of thousands of small landlords," said Daryl Chong, president and chief executive officer of the Greater Toronto Apartment Association.

But city councillors such as Josh Matlow (Ward 22, St. Paul's), who chairs the city's Tenant Issues Committee, argued that the exemption was to appease the development community.

"You would hope that this would be a matter of public discussion, but this just isn't seen as a priority. It hasn't been that shiny ball that has attracted the attention that it deserves," he said.

Mr. Matlow has joined the growing voice of housing advocates pushing for the exemption to be struck down, but he believes the provincial government – the only power that can help tenants not covered by rent controls – has turned a blind eye to renters.

"One of our big themes over the past two years has been Canada's lack of a housing policy," said Kenneth Hale, the director of advocacy and legal services for the Advocacy Centre for Tenants Ontario. "Well, we actually do have a housing policy, and it's to support home ownership and to leave behind people who can't make it into home ownership and let them fend for themselves."

But landlord groups and developers in Ontario have countered that the exemption has given power back to the market. They oppose any regulation to reel in possible abuses.

"If you were to say there are some landlords abusing the rent exemption by increasing the rent significantly, I'd say it's possible, but I just don't see it," said Doug Levitt, a senior partner at the law firm Horlick Levitt Di Lella and a member of the Canadian Condominium Institute. "There is a lot of push-back, but [the exemption is] one of the few things that have gotten to stimulate growth. I would never be for regulating it."

Removing the exemption would hurt the city's housing market by causing landlords to sell off their properties to avoid losing money on their investments, said Mr. Chong of the Greater Toronto Apartment Association.

"The annual increase in property tax and condo fees is way in excess of the rental guideline increases. If the 1991 exemption were to end, these owners would have no recourse but to sell because they'd be in a losing proposition. This could trigger a large sell-off," he said. "Then a lot of people would sell off their units, and all of a sudden a big part of the rental market is now sold off. All to the detriment of the families in the owner-occupied units."

But both Mr. Hale and Mr. Dent see that logic as flawed, saying tax incentives – not rent regulation – are what spur development.

"Simply getting rid of rent control just means that you can have an escalation of rent," Mr. Dent said.

For Ms. Beam and other renters at the Carnaby, there is little recourse. After contacting the Federation of Metro Tenants' Association's Tenant Hotline, one renter was told there was nothing they could do "except maybe lobby your local government."

(Baytree Real Capital declined to comment on how it determines yearly rental increases.)

"This is in an unlegislated area that puts all the power in the hands of the landlord," said Alexis Fitzjohn, another resident at the Carnaby, who is moving at the end of the month after being notified that the owner of her unit is returning. "I know landlords complain that the rental increase guideline isn't high enough, but then revisit it. Don't just not legislate it and then allow the landlord to raise the rent $600. I mean, how is that right either?"

Dangerous – but affordable – fire-trap apartments a risk to Toronto tenants
May 16, 2018 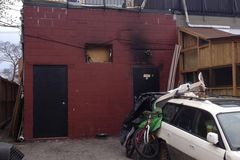 Toronto’s hot housing market spills over to condo rentals
April 10, 2017
Toronto condo builders still can’t keep pace with demand
April 6, 2017
Follow us on Twitter @globeandmail Opens in a new window
Report an error Editorial code of conduct
Due to technical reasons, we have temporarily removed commenting from our articles. We hope to have this fixed soon. Thank you for your patience. If you are looking to give feedback on our new site, please send it along to feedback@globeandmail.com. If you want to write a letter to the editor, please forward to letters@globeandmail.com.
Comments