Seen through the narrow lens of civic advantage, Kathleen Wynne's successful bid to win a mandate in her own right – with a majority, no less – should be good news for Toronto.

Ms. Wynne promises to spend $15-billion on transit in the Toronto and Hamilton region. That investment would include money for electrifying GO Transit rail lines, allowing for faster, more frequent commuter-rail service. (So her win is a boost for mayoral candidate John Tory's SmartTrack rail plan. It relies on electrification, which Conservative Tim Hudak would have cut.) Ms. Wynne's infrastructure plan also calls for spending on a relief line and a new Scarborough subway.

The question, as always, is how to pay for all these fine things. The Liberals were vague about how they would find the billions needed for these investments – and how they would balance the provincial books.

Investment may be good for Toronto. A provincial government that continues to go into debt is not.

So, the rejoicing we will hear from the city over the victory of Ms. Wynne and the subduing of Mr. Hudak's Huns may prove premature. Queen's Park and city hall are always jousting, no matter who is in power. City hall always wants more, more, more. Queen's Park always balks at what it sees as the incessant demands of its junior partner.

Several points of conflict are already in sight. If Olivia Chow becomes mayor in the fall – and she leads the polls at the moment – she wants to scrap the planned Scarborough subway and go back to the original plan to build a light-rail line. The Liberals have announced their backing for the subway, and invested a lot of political capital in that decision.

Ms. Chow has made it clear she would also push the province to help more with the Toronto Transit Commission's operating budget – an old complaint from city hall – and help the city with a huge backlog in public housing repairs. Even a premier who has promised to invest for success will have trouble agreeing to those demands. Getting rid of the provincial deficit, as she has promised to do by 2017-18, will be tough as it is.

The bigger question for Toronto is not whether Ms. Wynne shells out for this or that but whether she can help put the wind back in the sails of Canada's most populous province.

Ontario, and by extension its capital city, is facing big challenges. Once the dynamo of the national economy, the province is struggling to create jobs and maintain growth. Joblessness runs consistently above the national average. Ontario's troubles have obvious and serious effects on Toronto. This city is in the process of moving from big city to true metropolis. Hundreds of thousands of immigrants are arriving every decade from all corners of the world. The city is growing up (quite literally, in its booming downtown). Will it thrive on this growth or choke on it?

To cope, Toronto needs to invest in transit, roads, water systems and other key infrastructure. It needs to reform its often-inept city government, making it leaner and more responsive. If it is to overcome the stresses of growth and continue to thrive in the coming years, it needs the consistent help of the provincial government, to which city hall is tightly tethered.

More than that, it needs Ontario to succeed. Ontario's problem is Toronto's problem.

While she carried the day by arguing in the campaign that it is wrong-headed to cut the way to success, it is it is unclear what answers she has for the broader Ontario problem. Toronto shouldn't put on its party hat just yet. 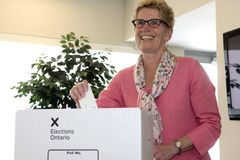