When the restaurant Daisho opens in the next few days, it will be the high-end cornerstone of the most heralded culinary name to arrive in Toronto in years. For the frenzied foodie underground, welcoming the Momofuku brand to this city is not so much an arrival as an Event, eclipsing the much-anticipated if somewhat disappointing debut of Scott Conant's Scarpetta in the Thompson Hotel two years ago.

Mr. Chang, the man behind the buzz is, at 35, an anointed global culinary superstar. Chef and owner of the Momofuku restaurant group, which includes a two-star Michelin in Manhattan (Ko), a quintet of other celebrated, good-luck-trying-to-get-a-table New York restos, and one Momofuku outpost in Sydney, he is reputed to deliver the best ramen, kimchi and other Asian-infused dishes you've likely ever tasted.

He rose to prominence by carving a niche as a high-end populist. His dishes – noodle bowls cradling perfectly cooked pork belly topped by a shot of Chinatown-stall Sriracha sauce; Korean fried chicken, blending Asian flavours with a resolutely traditional Southern standby; or his "crack pie," a butter tart that goes to 11 – redefined the kind of food that garnered critical success. It's food that chefs love but foodies may have needed permission from someone of Mr. Chang's star power to embrace.

The Toronto opening is also the most ambitious venture Mr. Chang's burgeoning Momofuku empire has undertaken.

Momofuku Noodle Bar is just one of the three restaurants he is opening in the new Shangri-la Hotel, along with a cozy, wood-panelled bar. All three, says Mr. Chang, who somehow combines a sense of chronic weariness with a fierce intelligence on high alert, will open within 10 days.

Why Toronto, I ask – a city that, while it often prides itself on its world-class status, is by general consensus not remotely close to that when it comes to food.

"Why not Toronto?" Mr. Chang replies.

He chose it in part, he says, to take advantage of an opportunity not easily duplicated in New York or elsewhere – a three-storey facility in the heart of the downtown core.

"In New York we're always fighting for space. New space in a new building? We couldn't do that there."

He chose it as well for staff, some of whom were complaining about quality-of-life issues in Manhattan, and were seeking a greener, cheaper and more family-friendly place to live.

Though it's only been open two days, at noon Friday, the lunch-line at the noodle bar is roughly 100 hungry patrons long. Appetites – and expectations – are high. The man's reputation clearly precedes him, but Mr. Chang doesn't take it as an invitation to lie down.

Perhaps most of all, he chose Toronto in order to stretch himself and his organization. "We're always trying to test ourselves. Life's too short to just breeze on by. Reputation means nothing. Just because something's been good in the past doesn't mean it will continue to be good. The biggest problem we have is people are cooking on reputation."

Mr. Chang committed to the Toronto project a year and a half ago, and has spent long portions of the intervening months here, supervising its development, and recruiting and training staff. (He declines to quantify the investment he is making, but quips: "I hope it's better than the investments I made in 2008," a reference to the stock market meltdown that followed the collapse of Wall Street's Lehman Brothers.)

You don't win Michelin stars with mediocrity and Mr. Chang sets the bar high, for himself and everyone he employs. New wait staff were said to have undergone extensive training, including homework assignments.

He makes no apology for this. "Why wouldn't they have homework assignments? We need them to know everything possible about the food. Is knowledge, is homework, a bad thing? Forgive me. Tell me a job where there's no training involved. Some people are born to be great cooks or front-of-house servers, and most people are not. But hard work and determination are great equalizers."

The Momofuku opening has not been entirely clear sailing. Although Mr. Chang met many fine purveyors, he also encountered some bizarre roadblocks: An inability to source widely grown Jerusalem artichokes ("That's a tuber vegetable. It lasts a long time"); and suppliers who insisted on minimum orders of $1,000 or who refused to deliver on Saturdays.

For two weeks, he says, "we couldn't get ducks. I understand a shortage, but ducks, refrigerated, last a long time."

Fulsome in his general praise of Toronto, Mr. Chang is not afraid to raise what he calls the elephant-in-the-room issue: Namely, why the city, authentically world-class in so many respects, doesn't quite measure up gastronomically.

"I like the city – a lot," he says. "It's a lot of fun. It has an amazing urban infrastructure. You have extraordinarily high standards for education, for financial markets, for building quality, for the arts. You understand the concept of super-high standards. But everyone agrees that Toronto's culinary scene, while good, could be better. Why isn't it? Nobody can pinpoint why it is. Nobody wants to be critical. It's the taboo subject nobody wants to talk about. Toronto food is great, but to ask 'why isn't it better' and be reprimanded for it – that's foolish. Why can't we question the status quo?"

Mr. Chang draws a rough analogy between the state of the Toronto restaurant industry and the chronically under-performing Toronto Maple Leafs. "There's a lot of great players on the team, but there needs to be more solidarity. You're not bottom-dwellers, far from it. You have all the pieces. I'm sorry. Make it happen."

In New York, he says, chefs often have trouble procuring the best quality miso and soy sauce from Japan or the best cheese wheels from Italy. The Japanese and the Italians want to keep the best for themselves.

"So we have a choice," says Mr. Chang, the youngest of four children, who studied comparative religion in university and worked for a time on Wall Street. "Either work with second best or hold our ourselves to account and make it ourselves."

Although there have been rumours of a Las Vegas incarnation of Momofuku, Mr. Chang says there are no immediate plans for further expansion. "We're not trying to force growth. Growth is forced upon us, fortunately. But if it's not just a money grab and it's a project that a lot of people can benefit from, we'll cross that bridge – when we get there."

For the moment, his challenge is clear – putting Momofuku Toronto in high gear. Mr. Chang's not interested in making a clone of his New York operations. "Basically, I want to plant the DNA and let it grow organically. I can't be everywhere at once. Momofuku is not me. It's everyone. I'm just the facade. We have to exceed expectations and be our harshest critics."

His mission comes steeped in a broth with the savour of carpe diem. The Toronto development, he concedes, is ambitious, but, "Hey, you're going to be dead one day, right?" 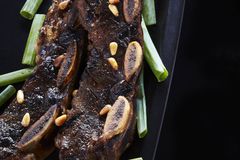 Megachef David Chang dishes on why he's setting up shop in Toronto
March 9, 2011 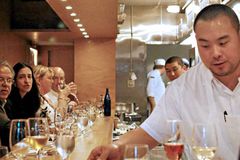