Before it was a restaurant, La Carnita was a brand.

The hip taco chain with four locations in Toronto, which has been hit by a flurry of criticism over a crass Instagram post riffing on Donald Trump, started life as a marketing experiment.

Opened by advertising agency OneMethod, the original La Carnita was a pop-up "restaurant" that sold art work and gave away tacos to dodge regulations on the sale of food. OneMethod founded the business to show off their ability to create buzz using social media.

The company quickly outgrew its guinea-pig ambitions, thanks in large part to a rabid following on Instagram and Twitter.

So when an Instagram post by the restaurant went viral this week, spurred by angry and derisive attention from fellow chefs and foodies, La Carnita was confronted with a hard lesson of life in the digital age: Social media giveth, and social media taketh away.

The post was a play on the notorious video that emerged last week in which Mr. Trump boasts of making unwanted advances on women. La Carnita's Instagram account displayed a picture of its signature dish, along with the caption, "What if Donald said, 'grab her by the taco'…"

The post was deleted within half an hour, owner Andrew Richmond has said, but by then the damage was done: Social-media users had taken screen captures and circulated the offending remark.

Many felt the restaurant was making light of violence against women. "Not just rude and insensitive, it also trivialized and made fun of sexual assault," Twitter user @mira_elhussein wrote.

Outspoken restaurateur Jen Agg, who owns charcuterie pioneer the Black Hoof, was among the most vocal critics, saying that the post was indicative of a deeper-rooted sexism in the restaurant industry.

"It's clearly a top down, culture problem," she wrote in an e-mail Friday.

"And it's worth noting they were just dumb and arrogant enough to get caught. They are by no means a bad egg in an industry full of angels. It's systemic and pervasive, the restaurant industry breeds a baseline of misogyny that's only reinforced by how hypermale it is at the top levels."

On Wednesday, Mr. Richmond personally apologized on the company's Facebook page, and said his managers would be receiving sensitivity training.

He also committed to donating a percentage of Tuesday food sales for the next eight weeks to a charity that "works to stop violence, poverty and empower women." (The promise was immediately criticized on Facebook for being insufficient.)

"We recognize that there are systemic and cultural things that need to be fixed to ensure that this doesn't continue happening," he wrote. The company did not respond to multiple requests for comment.

Mr. Richmond appeared to be referring to other instances of sexism in the way the restaurant has presented itself over the years.

After the Donald Trump comment, many social-media users pointed out that a La Carnita bathroom sign used to feature a man peering over the bathroom stall at a woman. The company also once ran a social-media promotion featuring the hashtag #TacHOES.

Star chef Matty Matheson, who runs the Parkdale restaurant Parts & Labour, obliquely denounced the Trump remark with a profane tweet earlier this week. In an interview Friday, he said La Carnita was exhibiting the sexism that's endemic in society more broadly, but also that the restaurant's culture was deeply flawed and that its attempts to be edgy often fell flat.

"I've known Andrew for a long time, and I know a lot of staff there," he said. "I think they're overthinking what's cool. And I think they're trying hard to make things funny or tongue-in-cheek."

Of course, tone-deaf comments on social media are hardly limited to the restaurant industry.

The Trump joke was just the latest instance of a business landing in hot water over ill-conceived quips.

"It happens so often that Gawker has created a dedicated page to keep track of them all," said Erin Richards, founder of the Toronto-based Hype PR. "It takes a split second for disaster to strike."

The temptation to capitalize on a subject in the news can lead businesses to act impulsively online, she said.

"It's important to do that in a smart, sensitive way – and nothing related to Trump qualifies as that." 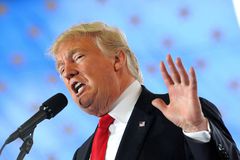