For the first time since it was built in 1931, Maple Leaf Gardens has a new name.

Ryerson University's new athletic facility, which includes a new hockey rink under the building's storied old roof, will be named the Peter Gilgan Athletic Centre at the Gardens thanks to a $15-million gift from Peter Gilgan, the founder and CEO of Mattamy Homes.

The NHL-sized rink will be dubbed Mattamy Home Ice, and is expected to be ready for the first skaters in March. The facility's grand opening is scheduled for May.

Mr. Gilgan's gift helps cover the tricky heritage renovation's $71.2-million price tag, which has swelled from $60-million – a far cry from the $350,000 Conn Smythe paid for the land 80 years ago. Ryerson raised $20-million through a student levy approved in 2009, which was matched by federal stimulus funds, as well as a contribution from Loblaw, which is installing a supermarket on the ground level.

"Peter is in fact giving a gift back to the whole city," said Sheldon Levy, Ryerson's president, after taking a ceremonial faceoff against Mr. Gilgan, who's a long time friend.

Mr. Gilgan is an Etobicoke native who had several sons attend Ryerson, and remembers spending Saturday nights in his youth watching the Maple Leafs on TV with his brother, longing for a seat at the Gardens.

"Dad wasn't too supportive of us spending all that money to go to a hockey game," he said.

He's still not much of a hockey player, but now has a piece of the hockey temple he marvelled at, and he hopes to see it humming "300 to 330 days a year" in the near future, accessible to the community as well as Ryerson.

There is still considerable work to be done. The rink remains a concrete shell, though risers show where rows of seats will soon sit. Cables dangle from the cleaned and refurbished roof where the large scoreboard – which no longer fits – used to hang.

Ryerson is still locked in a legal dispute with Maple Leafs Sports and Entertainment, owner of the Toronto Maple Leafs and Raptors teams, who objected to the use of the Maple Leaf name and worried the 2,600-seat rink would become a competitor for their own Air Canada Centre. But Dr. Levy said he believes they are "very, very close" to a solution that would keep them out of court.

He also pointed out that the main sign on Carlton Street will still bear the name Maple Leaf Gardens, as well as Mr. Gilgan's name for the new athletic centre.

"This building is, and will always be, Maple Leaf Gardens," Dr. Levy said.

Former Maple Leafs fan favourite Tie Domi was also on hand to take in the announcement, and thinks the new arena will be a major draw for Ryerson's varsity hockey programs.

"Kids who couldn't make it to the NHL are going to want to come here to just play," Mr. Domi said. "It really has a special feeling and it's here forever."

Carli Yim, 21, is captain of the women's volleyball team and will play on the new 1,000-seat multipurpose court, not at the arena. But the anticipation already had her at a loss for words.

"Now we will have home," she said. "I can feel my heart racing for that very first game." 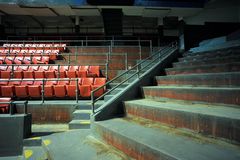