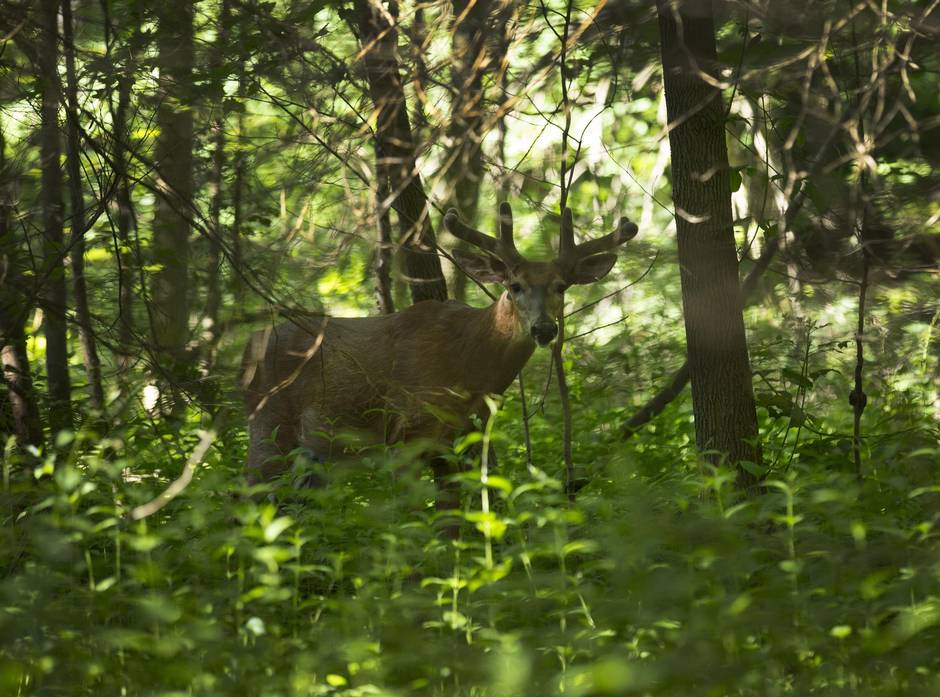 A deer along the west-side trail through Glendon Forest. (Photos by Peter Power for The Globe and Mail)

We’re five minutes into a ravine walk through Glendon Forest and already Jason Ramsay-Brown has me worried.

I’ve always thought of Toronto’s ravines as the perfect escape and this dense 60-hectare tract along the West Don River exceeds all expectations. Clustered above the deeply incised valley are Glendon College’s residences, the sprawl of Sunnybrook Hospital, Bridle Path mega-mansions and a lot of impatient drivers. Down here along the undulating Don, it’s bird songs and bunny rabbits, contented joggers and the occasional deer; all-enveloping greenery and serenity everywhere you turn.

Or so I thought. But then Mr. Ramsay-Brown goes to work. As the author of a profound and passionate new book, Toronto’s Ravines and Urban Forests, the 41-year-old web developer, wildflower steward and butterfly breeder sees the city’s hidden spaces with a clear-eyed complexity that disarms dreamers like me. 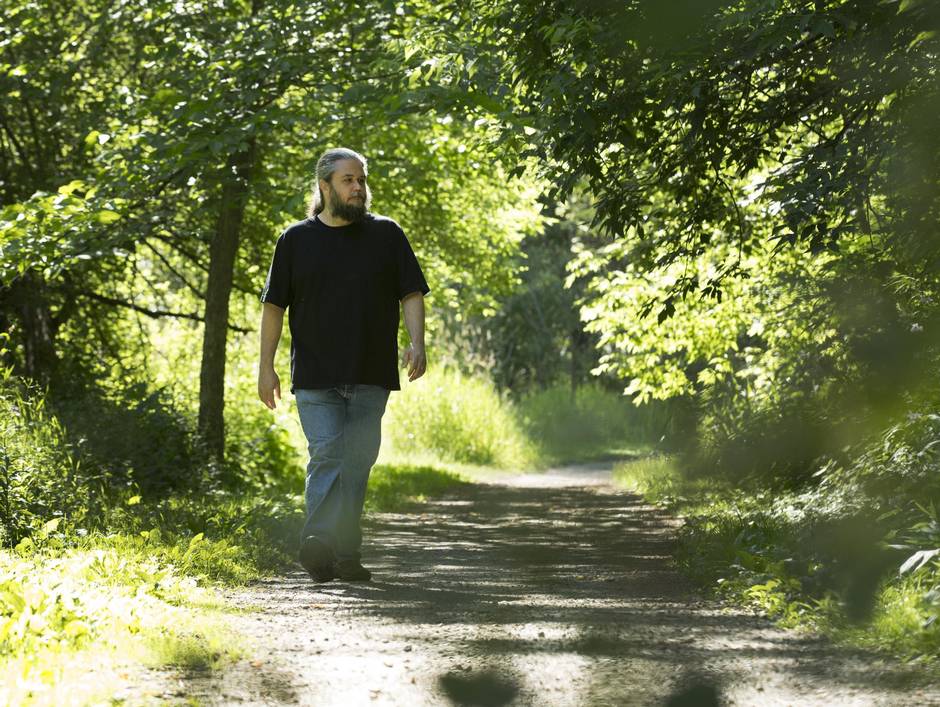 The ambivalence starts at a bridge over the Don that’s been blocked with a prison-camp kind of wiring to prevent access to the wilder side of the river. “I’m surprised to find it intact,” he says pensively. “They put up these gates to stop people crossing because it’s much more fragile over there. I just don’t get it: People come down here to enjoy something and then they just destroy it.”

A little further on, he points at the long avenue of look-alike weedy things lining our narrow path. “This is dog-strangling vine,” he says. “It’s an invasive species and it spreads viciously. We have to get rid of it because otherwise it out-competes native species and kills biodiversity.” 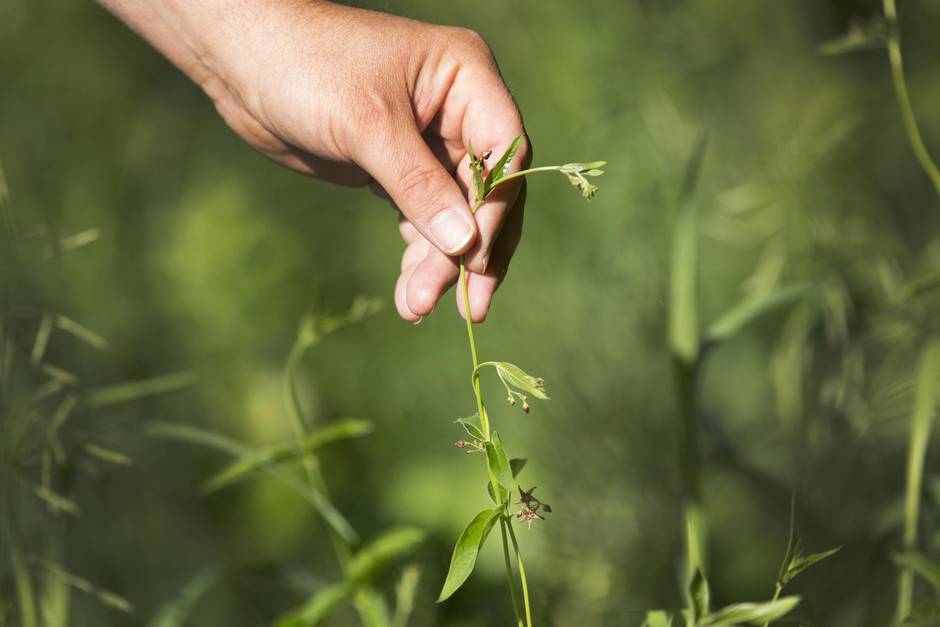 An unleashed dog squeezes by and bounds into the forest. “I love dogs,” he says, “but that guy just scattered the seeds of an invasive species.”

I tell him, only half-joking, that he’s stressing me out. “I have that effect on people,” he says, and at least he’s smiling. “I hate to say it, but by the end of this trip, I’ll ruin nature for you. Nothing will seem like the verdant green space you thought it was.”

He doesn’t ruin it. He makes it real. I don’t want to think of these majestic places as fragile or endangered when I’m striding through them but Mr. Ramsay-Brown is no idle guilt-tripper. Yes, he draws my attention to the beguiling purple flowers of dame’s rocket and the wetland majesty of the reedy phragmites – both invasive species that a small number of volunteers such as him do their best to eradicate so ravines can continue to please people like me.

But as we walk the gentle, winding river path – the Don at this point still preserves the picturesque looping meanders that were straightened into a regulated dullness closer to the lake – he itemizes nearby native species such as turtlehead and blue flag iris, eastern cedar and staghorn sumac, with a poetic appreciation that sounds closer to my romanticized idea of a ravine walk. When I mention my regular cross-city short-cuts through Nordheimer Ravine, a much-manipulated passageway above the buried Spadina subway line, his enthusiasm can’t be contained.

“One of the largest patches of skunk cabbage in the city is just by the corner of the Spadina bridge. Go there in February and you’ll see a big melted patch of snow. Skunk cabbage generates heat and it’s a great sign that spring is almost here.”

I don’t have his educated hiker’s skill set and I start to realize what I’m missing by only seeing what I’ve trained myself to see. Mr. Ramsay-Brown’s ravine world is definitely more eloquent than mine. Alongside the unenviable worry about invasive species, there’s an endless series of stories and conversations about heat-generating plants, a 6,700-year-old native effigy unearthed in a Don Mills park near 1,000-year-old Iroquoian pottery, and a 19th-century tax-avoidance smuggling route along a gully between Lake Ontario and Kingston Road in Scarborough that was also home to artist Doris McCarthy and prompts a digression about the geological marvel of the Scarborough bluffs. His version of the hidden city seems more intriguing with every step. 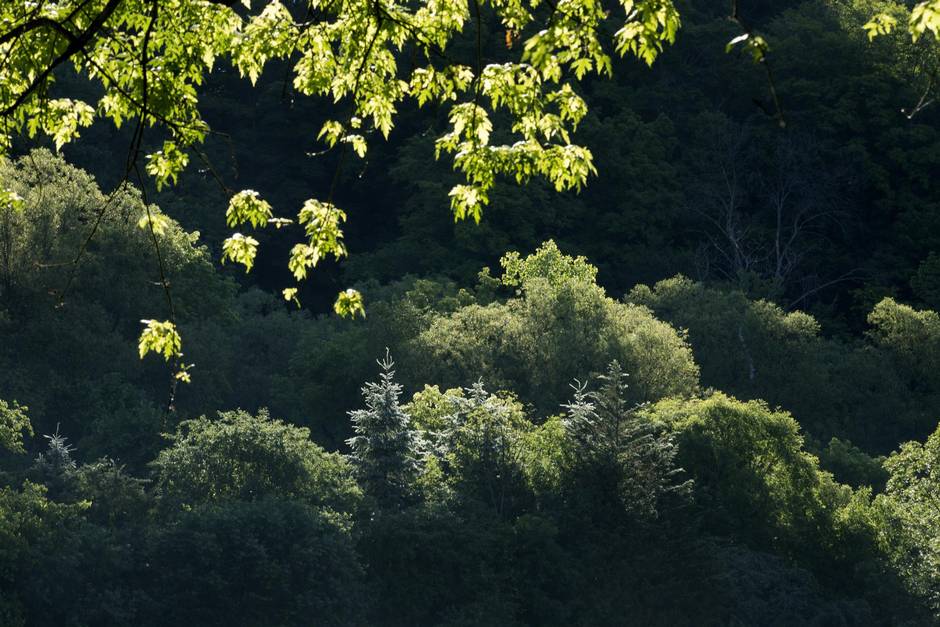 An outside look at Glendon Forest.

“The simple pleasure of walking through a ravine is fine,” he says, “but I’ve grown accustomed to hearing the broader stories and they’ve made me much more passionate at a much deeper level. I think these stories attract people to the ravines who aren’t just attracted by the showy grandeur of nature. If people hear these stories, they’ll want to come down here. If they come down here, they’ll fall in love – and we protect what we love.”

Protection takes many forms. He points out the rough-hewn blocks of quarried armour stone installed in what must once have seemed like a massive human intrusion to preserve the Don’s eroding banks, weakened by all the urban rainwater and sewage overflow funnelled down into the city’s valleys. “It’s a natural look and it doesn’t shift over time like the mesh netting of the old gabion baskets,” he says. “And it provides warm spaces, hibernaculums, for butterflies and snakes.”

Hibernaculums, gabion baskets – this is serious stuff. But if you want more butterflies to dance across your field of vision in the urban forest, you have to think hard about how the back-room, engineered vision can do its bit.

The renaturalization of the city’s ravines over the past decade or two didn’t just happen in some nature-abhors-a-vacuum way. Mr. Ramsay-Brown cites the rewilded Terraview Park and Willowfield Gardens Park, unexpectedly flourishing near Highway 401 and Pharmacy Avenue – mallards, herons, mulberries and tamaracks thrive alongside stormwater-detention facilities and oil/sediment separators in an urban co-existence that is equal parts pretty and practical.

We take a moment, deep within the forest, to search for tadpoles just like I used to do as a kid in once-swampy North York. My turn to get real: Almost all of those childhood wetlands and watercourses are buried and long gone, a small tragedy that was multiplied many times over, back when ravines were largely despised and disregarded, messy tracts of unevolved wilderness poorly suited for urban and suburban living.

Now they’re prized for the same reason – in how many other big cities can you so easily descend into a fantastic forested canyon such as Moore Park ravine? When my friends from Dublin come to Toronto, this is what they want to see as much as Chinatown or the AGO – and what I regard as a nice nature walk, they experience as astonishment. 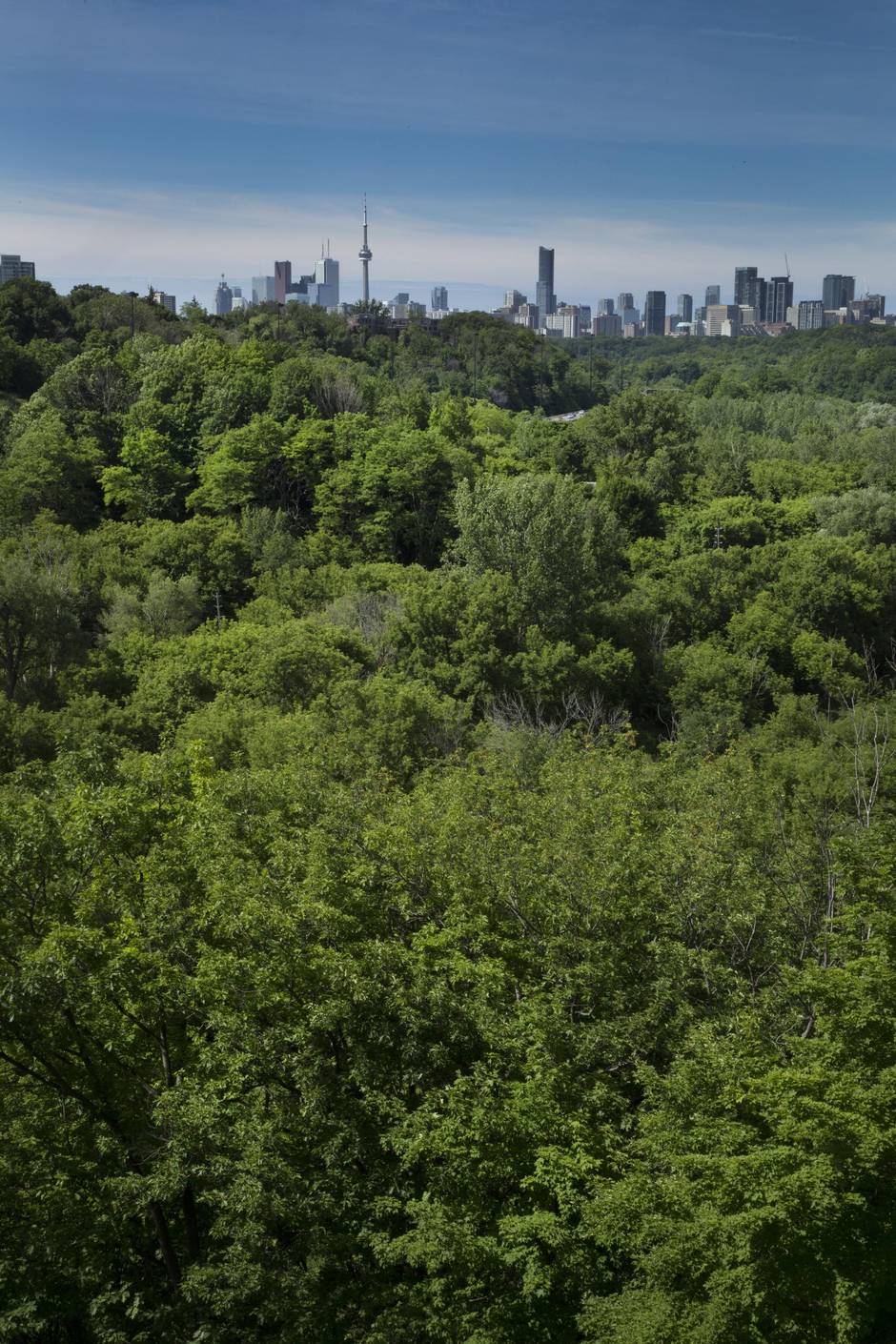 Far away from Lake Ontario, the vast Don River Valley is teeming with life.

Mr. Ramsay-Brown’s commitment to ravines started with a similar sense of wonderment. His four-year-old daughter, conveyed across the Don Valley on a daily basis, suddenly realized there was a deeper world all around her. So he promised her a summer of ravines – and then had to find the expertise to answer her questions. Now at the age of eight, she counts the flashy staghorn sumac as her favourite native plant and does a dozen planting events and garbage clean-ups each year.

I’m starting to feel a bit inadequate, with a pedestrian brain that appears to be limited to beauty and bunny-rabbits. But we’re still walking happily, still savouring the charms of the forest. Maybe, I say to my talkative companion, that’s good enough.

It’s complicated, he tells me. If you want to persuade people to protect ravines from all the destructive encroachments currently available, you can’t depend on old-fashioned abstractions such as beauty and inspiration – you have to hold forth on ecological goods and services, and quantify the economic value of the tree.

But down here in the middle of a forest on a sunny Saturday morning, the world has a way of looking different. “Everything else we talk about is still greatly overshadowed by the beauty of this place,” he says. “The solitude from the hustle and bustle, the ability to stroll along and connect with each other, the feeling of complete escape – these things are the most precious.”