Behind the Rexall Centre at Toronto’s York University, past two outdoor tennis courts and beyond a six-foot-high chain-link fence, lies a hole in the ground which just last month housed a gas generator.

At first glance, the hole looks crude and makeshift – carved into the earth with bits of foam and torn black garbage bags as insulation.

But that hole is a part of a mystery that has baffled police in Canada’s largest city and captured international headlines. The gas generator, it turned out, was used to power a seven-metre underground tunnel just a short distance away – a discovery that has raised alarm among police and security officials, and fuelled speculation around the world over who built the structures and why.

The mystery deepened Tuesday, with Toronto Police releasing fresh details. Among their disclosures: that the tunnel was likely dug entirely by hand using a “pulley system,” that it was likely inhabited as recently as this winter, and that nailed inside the bunker were a rosary and a Remembrance Day poppy.

(Video: What police said about the mystery tunnel)

They also admitted they’re perplexed by the case. “There is no criminal offence for digging a hole,” deputy chief Mark Saunders said Tuesday. Still, he said, they’re hoping the public and local residents will help in solving the mystery.

Police have since filled in the tunnel, but not the hole. Sources said that in such cases, investigators may have delayed publicly releasing the details to see whether anyone returned to it.

The site was first found in January by a worker at the nearby Toronto and Region Conservation Authority.

That it was found at all was a sheer coincidence. The quickest way to get to the site is to walk around to the back of the Rexall Centre, and toward a spot on the chain-link fence cut by emergency workers last month. With the hole now patched up, visitors would have to climb over the fence, and into a densely wooded area covered with fresh snow.

After fumbling around through shrub for some time, they may, as a Globe and Mail reporter did Tuesday, stumble upon a second hole.

That’s what the TRCA worker did on Jan. 14, after noticing a large mound of dirt while walking through the area. At the same time, the worker spotted a large piece of wood that deputy chief Saunders said appeared to be “acting as a lid of some sort.”

The worker removed the lid, and found himself looking down a large, 10-foot hole with a ladder sticking out. That’s when he called police.

How big was it?

Inside, police found a sophisticated bunker measuring more than six feet tall and almost three feet wide. The length of the tunnel was reinforced with a wood frame built out of two-inch-by-eight-inch planks. As is standard for most professional builders, the planks were placed 16 inches apart. The tunnel was lit using moisture-resistant light bulbs powered by a gas generator found, along with soundproofing foam, in the second hole.

“The individuals responsible for building it clearly had some level of expertise in ensuring its structural integrity,” deputy chief Saunders told reporters Tuesday.

The mystery of who built it 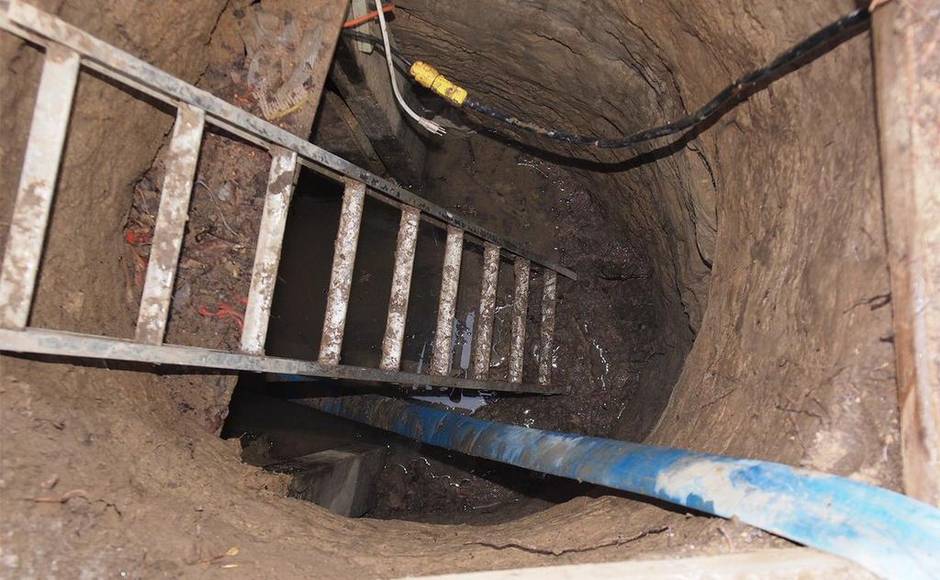 Police believe the tunnel was likely built by more than one person, and that the materials may have been taken from a construction site at the Rexall Centre, where workers were building new bleachers.

The Rexall Centre will serve as a venue for the coming Pan American Games, but the deputy chief was adamant that the tunnel posed no threat.

“All of our venues, we have a very robust security mechanism in place,” he said. Because of the undulating topography, he said, if the tunnel had continued it would likely have surfaced on the side of a hill, away from the Rexall Centre.

But at least one security expert, former Canadian Security Intelligence Service assistant director Ray Boisvert, said that the prospect of terrorism should not be ruled out.

“Yes, there’s no evidence the Games were threatened. Absolutely. I don’t deny that. But I don’t remove the possibility that this is part of a potential plot to eventually threaten the Games.”

Others, meanwhile, speculated that the tunnel may have been the work of nearby York engineering students. A spokesperson for the university's engineering society, however, said they had nothing to do with the tunnel. Still others suggested it may have been an emergency bunker for “survivalists.” Cam Mather, the author of a survivalist book, said this is a possibility, but doubtful given the relatively urban surroundings.

“It is such an anomaly,” Mr. Boisvert said of the discovery. “It’s like right out of a murder-mystery.”

With a report from John Lorinc