For the second year in a row, the City of Toronto will rely on last-minute corporate donations to keep outdoor ice rinks open beyond the end of February.

Mayor John Tory announced Friday that Maple Leaf Sports and Entertainment and Green For Life will each donate $100,000 to boost the number of rinks that will remain open beyond this weekend from 17 to 29. The decision comes just days before Toronto was to shut down dozens of rinks despite another chilly winter, sparking debate at City Hall over whether the city should be more flexible in budgeting for longer rink seasons.

"I think it's fitting in a place like this that's all about winter and all about skating and all about hockey, that we should have the rinks open for a longer period of time," Mr. Tory said in announcing the sponsorships Friday.

"We had calls well before noon from a number of companies who were stepping up to say 'we'd like to help in some way to extend the skating season,'" Mr. Tory said.

Both of this year's sponsors have had extensive dealings with the City of Toronto. MLSE received a $10-million loan from the city last year for the expansion of the BMO field, and Green For Life has a contract for private garbage collection in Toronto.

Other cities, including Calgary, are flexible on how long its rinks remain open, depending on the weather. In Montreal, meanwhile, the skating season typically runs until mid-March.

But in Toronto, Friday's announcement marks the second year in a row the city has had to scramble to find a way to pay to keep its rinks open for a longer winter. The city pays about $4,500 a week to operate each rink. The rinks that stay open later will operate until March 22.

Last year, the city faced criticism after revealing that, despite a deep freeze, it had budgeted for only 17 of its 51 outdoor rinks to remain open beyond February. Scotiabank and Canadian Tire eventually stepped forward as donors to keep an additional 11 open.

And while Mr. Tory complained about those rink closings while campaigning for mayor, he said Friday he now understands why this is the case.

"To be fair to city officials, they have established numbers that they look at in terms of how many people go skating at different times of year, and the numbers do start to fall off at this time of year, no matter how cold or warm it is," he said.

"They don't make the decisions to be mean to anybody or in a vacuum."

Meanwhile, Councillor Michelle Berardinetti, chair of the city's parks committee, passed a motion at budget committee to look at the viability in the future of extending the rink season.

Still, she raised questions about whether keeping more rinks open for longer is the best use of city resources, noting that last year staff say the extra rinks kept open through corporate donations were "little used."

"Given our budgetary pressures and all of the money we need at the city, is this the best use of those corporate sponsorships?" she asked.

"We are not saying no. We are trying to do what we can. Moving forward we want to make sure that we listen to the residents and make sure there is a definite need."

He added that the colder-than-normal conditions are expected to continue into March, but wouldn't say whether colder winters in general are here to stay. 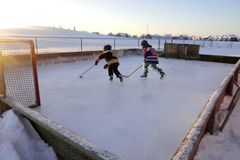 How the tradition of pond hockey wound up on thin ice
January 30, 2015 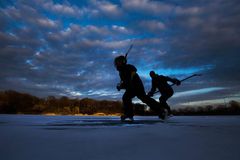 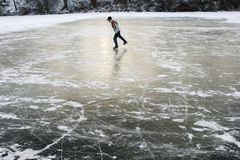