"We are not the favourites," John Tory told supporters in his kick-off speech on Wednesday evening. Whether he was being candid or tactical is hard to know. Painting yourself as the feisty underdog is a common ploy. But either way, it happens to be true.

The latest poll at this early stage of the long campaign that ends in the election for mayor on Oct. 27 shows that former NDP MP and city councillor Olivia Chow is the clear leader, with 36 per cent support to Mayor Rob Ford's 28 and Mr. Tory's 22. The nightmare for the Tory camp is that he stagnates at that level or even shrinks, leaving Mr. Ford and Ms. Chow to fight it out at the end.

How does he grow? How does he take on his two main opponents while still appealing to the voters who like them? Mr. Tory made a game stab at it in his spirited opening speech of the seven-month race. He went after Ms. Chow as a died-in-the-wool NDPer who would "return to the tax-and-spend days of old." The last thing Toronto needs, he said, is a "pendulum swing" from Mr. Ford's hard right to Ms. Chow's hard left. "Olivia Chow brings a long record of polarization."

On the other hand, he said he stood with frustrated commuters, hard-pressed taxpayers and struggling new immigrants. In other words, he may be a conservative, but he is a conservative with heart, conceding nothing to Ms. Chow in the compassion department. Or, for that matter, in the personal back-story. At her own launch last week, Ms. Chow talked about her experience as a teenaged immigrant to Toronto from Hong Kong. Not to be outdone, Mr. Tory said he too comes from immigrant stock – though he had to reach back nearly a century and a half. His great-grandfathers came to Toronto in the 1870s "with next to nothing."

Turning his attention to Rob Ford, Mr. Tory reminded his audience that Mr. Ford took almost half the vote in 2010. "No one came to office with more goodwill than Rob Ford. No one will leave office having exhausted more of that goodwill than Rob Ford." He said the mayor has "disappointed almost everyone with his behaviour, including in particular his almost complete unwillingness or inability to work with others." In the best line of the night, he said that "I'm not perfect, but, unlike some others, I will never be content with that fact." It was a clever dig at Mr. Ford's I'm-not-perfect, maybe-you-are line.

But, while Mr. Tory had his hardest words so far for mayor, he was careful to say that the idea that attracted so many voters four years ago – that "city hall should answer to you every day and for every dollar of your money" – was a basic one that he would not abandon. To the contrary, he said he would continue Mr. Ford's campaign against waste at city hall, using his skills as a leader of complex business and civic organizations to make Toronto's government one of the most efficient anywhere.

The essence of Mr. Tory's message is that he would give voters Mr. Ford's respect for taxpayers without the divisiveness and the sideshow and Ms. Chow's care for the disadvantaged without the hard left swing and the reversion to "tax-and-spend." That would position him neatly in the middle as a caring conservative, the candidate who would take Toronto "not left, not right, but forward."

What is more, he says, he is the guy who can get results where others have failed. While Mr. Ford could never play well with others and Ms. Chow is a polarizing figure, he says he would use his team-building experience as a chief executive and chair of the United Way to build support for his agenda on city council and make deals with other levels of government. "I will bring us together – I will bring us together as one great city – and together we will get things done." In the printed text of the speech, those final words are underlined to remind Mr. Tory to emphasize them.

It is a plausible, even powerful pitch. It is hard to dispute that a wild swing of the pendulum would be a mistake for the city, even harder to dispute that Mr. Ford has been a train wreck. Mr. Tory's intelligence, decency and enthusiasm for the city are indisputable, too.

But whether he will catch on is another question. Ms. Chow is a strong candidate with an appealing personal story and she is off to a fast start. She can count on the city's well-organized left.

Mr. Ford has a core of supporters that seems to stick with him whatever he does. Mr. Tory has no such natural base. Winding up his speech, he reminded supporters that they have just seven months to forge a connection with voters. Even for someone with the skills at speaking and argumentation that were on display on Wednesday evening, it is a tall order. 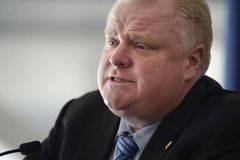 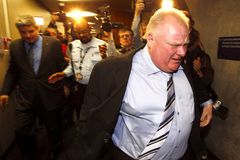 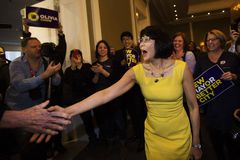