A concerted push to begin narrowing lanes across Toronto will go ahead during next year's construction season with the qualified backing of incoming mayor John Tory.

The new policy from the city's Transportation Services department is designed to boost safety by reining in vehicle speeds, while freeing up road space that can be used for bicycle lanes or wider sidewalks.

Mr. Tory said he would be "watching like a hawk" to make sure the change didn't worsen congestion, one of the key issues on which he campaigned. He also acknowledged that narrowing lanes is not a radical idea.

"I would think that if there were some bad consequences for safety, or otherwise, from the streets where these [narrower] lanes are already in place – in addition to the other cities, by the way – streets like Danforth and University Avenue, where they're already in place, we would have heard about it," he told reporters at City Hall.

Narrower lanes tend to encourage people to drive more slowly. Research shows, though, that they can have as much capacity as wider lanes. Transportation Services general manager Stephen Buckley argues that the effects of reduced speed can be mitigated by tinkering with traffic-signal timing.

Current lanes widths are generally based on Transportation Association of Canada guidelines, which critics say are outdated. They have not been universally applied throughout the city, so comparisons with the new policy are difficult.

The new standards call for default widths of 3 or 3.2 metres for through lanes, depending on the type of road. Curb lanes are to have a target width of 3.2 metres where dedicated cycling spaces are present and 4.3 metres where it is absent.

However, those widths are the starting points of a complicated process that seeks to balance the needs of all people on or near the road.

Under the new policy, each type of road has a range of possible widths depending on a list of 18 factors. For example, large numbers of trucks or a higher speed limit could lead to the lanes being on the wider side. Conversely, high pedestrian activity or a lower limit might result in a lane at the narrower end of the range.

Although the new policy has just been finalized, a few stretches of Toronto roads had earlier been repainted under the guidelines. One example is Bay Street, between College and Dundas Streets. Hints of the old lanes are still evident there but the new ones are narrower, allowing dedicated space for bicycles as well.

The city plans to use space freed up by lane resizing in a variety of ways. Among the options are bicycle lanes, wider sidewalks, medians and parking or left-turn lanes.

"It's all about safety, not just for the people in the vehicle, but also for our vulnerable road users," she said.

A team of experts has been working on the new guidelines since April, Ms. Chapman said, testing them and consulting with stakeholders such as the Toronto Transit Commission and emergency services. 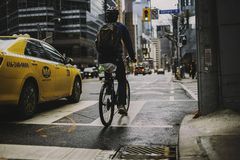 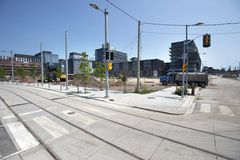 Rob Ford’s circus is over. Toronto City Hall will never be the same
November 21, 2014 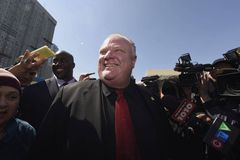 Instead of blocking progress, Toronto should encourage Uber
November 19, 2014